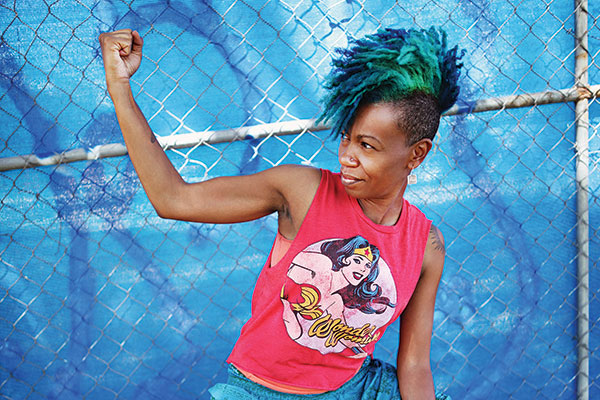 In three new collections out this summer, poet Anastacia-Reneé experiments and evolves.

When you hear Anastacia-Reneé read poetry, you’ll make much more noise than you normally would at a poetry reading. You’ll make a variety of noises, some of which will be unfamiliar to you, all of them louder than you expect. Because Anastacia-Reneé delivers what poetry should provide: an emotional experience that’s familiar and relatable, yet framed so uniquely it’s like having emotions for the first time.

Truly funny people—people who make you laugh whiskey into your sinuses—are a joy to be around. Survival is a losing battle for everyone, and it’s cathartic to see someone survive with grace. Reading or hearing Anastacia-Reneé’s poems is like watching someone get hit by a drunk driver, leap out of their totaled car and do a backflip on its smoldering remains. Her poetry can turn from hilarious to devastating on a dime, and is frequently both at once.

“I use humor because that’s the way I see life—a combination of funny and not so funny. I need both or I won’t survive,” Anastacia-Reneé says on the patio of the Quarter Lounge in June, a few blocks away from the Hugo House, where she is Writer-in-Residence for a few more weeks.

In addition to being a writer, Anastacia-Reneé is also a painter, photographer, teacher, multimedia performer and filmmaker. (Her 2007 documentary GOTBREAST? is about women’s historical and cultural views on body image self-esteem.) She writes essays and fiction, but she’s primarily a poet, returning often to themes of transformation, human relationships and the Black experience. A Cave Canem Fellow, she published her first book, 26, two years ago with Dancing Girl Press. This summer she has a remarkable three books of poetry coming out: (v.) from Gramma Poetry, Forget It from Black Radish Books and Answer(Me) from Argus Press’ Winged City Chapbooks.

French poet Paul Valéry once said that the opening line of a poem is like finding a fruit you’ve never seen before on the ground, and the poet’s task is to create the tree from which such a fruit would fall. Anastacia-Reneé spent years learning as many forms of poetry as possible, and it’s obvious that her approach to creating trees is informed by a botanical library. Reading her three new books chronologically provides the rare experience of watching a poet develop and finesse a new form.

Anastacia-Reneé’s poems are always complex and often formally unique, but never arbitrarily or ornamentally so. (v.) features a series of poems called “Skipper,” a pointillist portrait of an extremely complicated woman, inspired by the Skipper doll (Barbie’s younger sister). In the first poem of the series, Anastacia-Reneé’s personification of the doll, initially funny, becomes a palpable buffer against the tragedies at the heart of the poem. She is a tonal gymnast and her “Skipper” series is a balance beam.

Anastacia-Reneé seems like a movie character exploding through the screen—not because she’s acting but because, like the speaker in the Skipper series, she’s particularly real. Growing up in Kansas City, Mo., she wrote constantly. “I wrote in journals about almost everything, including quotes from conversations and dictionary definitions,” she says, explaining that her mother suggested she read the dictionary for two summers in a row (she did). Her mother, a medical librarian and visual artist, gave her books, journals and art supplies and took her to museums, where Anastacia-Reneé dreamed of one day showing her work.

Finding art or an arts community was (and is) hard for a young Black woman in a town where art appears to be exclusively the domain of rich white people. As a child, she believed that art is like “magic and macaroni and cheese—everyone should be allowed to do it. Plus everyone can be good it.” But she encountered almost no art or literature by women or people of color in school, which created the impression that in order for art to be good it had to be created by and for white men. Like so many, she struggled with doubts about the “seriousness” of her own work because of racism and misogyny.

Anastacia-Reneé first found a relatable arts community in Missouri’s Black Poets Collective. She wrote, critiqued, performed and traveled with the collective, free of the awful shit frequently said to POC writers in workshops, like, “Maybe you’re talking about your culture too much” or “What is the relevance of being Black or a woman in this piece?”

“As an adult, what drew me to the poetry genre more than anything was the brevity and sparseness of it,” she says. “Unlike many of my peers, I had my children early and I thought, ‘I have no time to create novels!’” Her first son was born when she was 22 and the second when she was 26. When they were little, she would put them to bed at 10 p.m., write poetry until 2 a.m., and then go to work four hours later.

Anastacia-Reneé did her first readings while still in Kansas City, calling herself the Brown Suga Poet. Initially, people mislabeled her as a spoken word poet, despite her eschewing the “poetry voice” that makes everyone sound like William Shatner. She never understood why spoken word poets aren’t just called poets, since poetry has to be written to be spoken. She calls herself a cross-genre or hybrid writer, having fallen in love with Alice Walker’s 1973 book In Love and Trouble: Stories of Black Women just before the hybrid genre, which synthesizes traditional and experimental styles, became widely recognized. She regards the voice as an instrument and the writer performing their work as a conductor. The way she manipulates her voice in response to subject matter and word sounds is a definite reminder that language is music. In the hour after you hear her read, everything else seems out of tune.

A relationship with someone in the military took Anastacia-Reneé to San Diego, where she honed her conductor skills as “DJ Sug,” a radio personality on an underground hip-hop and indie show called ILLFONIX. After three years there, the couple returned to Kansas City before moving to Seattle.

Then, after living in Japan, she chose to come back to Washington, landing in Mukilteo nearly 10 years ago. Living in Mukilteo was extremely lonely until she met artist, writer and Reparations founder Natasha Marin, who she knew from Cave Canem (a home for Black poets), and Wendy Call, who was Hugo House Writer-in-Residence at the time. “Finding community takes time,” she says.

Accordingly, in time Anastacia-Reneé flourished creatively. In 2015 she wrote, produced and directed her one-woman show 9 Ounces—the weight of an adult human heart—which debuted at the Project Room and later ran at Hugo House and Gay City. It was billed as “a queer woman of color’s mid-life a-ha moment,” explored through the interwoven narratives of three characters: a child named Luna; Saraphina, an amalgam of Anastacia-Reneé’s respected elders (particularly her 99-year-old great aunt); and Alice, an artist and writer. “I honestly believe these characters wanted me to be a vehicle for their experiences and a conduit for their wisdom and challenges,” she says.

Alice reappears in Anastacia-Reneé’s forthcoming book Forget It, which she began writing in 2012. Like 9 Ounces, it’s a fictionalized story of self-discovery, chronicling a woman’s divorce, miscarriage, move to Seattle and interactions with a woman named Alice, who may be an ideal or mature version of herself. The collage-like book incorporates dream sequences, memories and imagined scenarios in sections comparable to Haibun, a literary form popularized in 17th-century Japan that pairs a haiku with related or sometimes even explanatory prose. These pairs of texts can be found throughout Anastacia-Reneé’s work, though she started writing that way before she had ever heard the term Haibun.

Forget It, Anastacia-Reneé says, was inspired by trying to let things go, confront societal impositions and unpopular truths. When she finished it in 2014, she began working on her chapbook Answer(Me). The two books are equally formally experimental, but while Forget It reads like waking up from a dream, Answer(Me) has the electric atmosphere of a high school séance. Answer(Me) starts with an address to the reader: “You get to amen which day is filled with church bells and sweaty sheets…this is a story about a type of _______. There will be sections of the story where you get to add mashed potatoes or meat. Where you get to use your five senses to  interpret ________.”

The blanks invite the reader to inhabit the text’s romantic trajectory, acting as screens onto which readers can project their own love narratives and participate in the creation of the text. “If you read this book three times your lover will leave you,” the introduction warns. “One of you, dear readers, will somehow gain a lover just by reading this book…careful. Do not hold her with both your hands—keep them open enough to close when she flies in.”

The book’s fairy-tale prologue ushers in a text composed mainly of “prayers,” “answers” in the form of original poems and “proverbs” that are usually quotes from such surprising combinations as Rumi and the Beastie Boys. The skill with which the quotes are paired is hypnotic, like a collage of images of the same object from a library of sources. Most pages have all three, sometimes followed by footnotes. The overall effect is of reading an incredibly hot, queer, choose-your-own adventure book that’s also a powerful spell.

(v.), Anastacia-Reneé’s most recently written book, is the most representational of the three coming out this summer. The experimental elements are there, incorporated more seamlessly than ever before. Anastacia-Reneé describes (v.) as “an accumulation of poems she couldn’t let go of.” It is also a response to Ntozake Shange’s For colored girls who have considered suicide when the rainbow is enuf: “somebody/ anybody / sing a black girl’s song / bring her out / to know herself …” Poems about blackness, queerness and motherhood are bookended by (v.)-specific glossaries that function as poems themselves.

h.
hell
heliotrope
heaven
hymen
hill
hymn
hind
hell & heaven seem to start off the same. all
he & he until you have to figure out if you
want your purgatory to burn hot or cold & no
one ever really wants to choose until it’s too
hot or too cold. he & he.

Few writers find such a wide range of ways to communicate huge thoughts as Anastacia-Reneé has done in all three of her forthcoming books. She has an unprecedented ability to assess absolutely anything for potential inclusion in her work, and an even rarer ability to weave disparate elements into something cohesive, relatable, yet entirely original. Seattle is truly a lucky city to be chosen as home to that process, and to anticipate what magic Anastacia-Reneé might make from us.