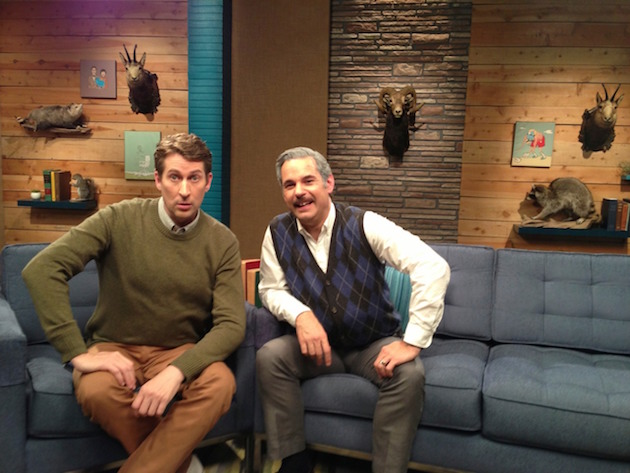 Monday, May 23-Thursday, May 26
The stateside release of Belladonna of Sadness, Eiichi Yamamoto’s 1973 anime is a big deal in cult cinema circles. This psychedelic fable about a young girl seeking to avenge her rape with Satan’s assistance has been interpreted as a powerful feminist polemic and misogynistic trash with equal fervor. Love it or hate it, its combination of lysergic horror, Freudian hyper-sexualization, and jaw-dropping watercolor-inspired beauty is unshakeable. –Tony Kay
Northwest Film Forum

Tuesday, May 24
“Turn” at Joe Bar is definitely an art nerd event, but I’ll keep promoting it because this is a good place to make friends over coffee or a beer. Created and curated by Shaun Kardinal, this month’s one-night-only event marks the eleventh installment in a 12-month-long experimental series of exquisite corpse-inspired, multi-media sculptures that have incorporated (literal!) mastications, rebuilds and transformations by artists including Robert Hardgrave, Victoria Haven, Sean M. Johnson and Kimberly Trowbridge, among others. This month it’s Klara Glosova’s turn (she also currently has a solo show on view at Glass Box Gallery). The Czech Republic-native and long-time Seattle resident is the mastermind behind too many curatorial projects to mention, including NEPO House and five consecutive years of NEPO 5K DON’T RUN. But the cornerstone of Glosova’s brilliance rests on her own work, which is exquisitely graphic in execution, self-effacing while erotic and self-referential in narrative (frequently posing questions about the existential sustainability of being both soccer mom and professional artist). Whatever she reveals on Tuesday night will be a treat, if not a feast. —Amanda Manitach
Joe Bar

Tuesday, May 25 – Sunday, May 29
Intiman Theatre’s 2016 Festival gets started this week with Lydia R. Diamond’s Stick Fly, a crackling, funny family drama set in the Martha’s Vineyard vacation home of the LeVay family. Brothers Kent and Flip have brought their significant others home to meet the parents for the first time; Kent’s fiancée Taylor is a successful academic, while Flip’s girlfriend Kimber is a self-described WASP who works with inner-city school children. The script riffs brilliantly on issues of class and privilege, long-buried family secrets—all that good messy, meaty, just-shy-of-melodrama stuff. Stick Fly runs through June 19. –Gemma Wilson
Langston Hughes Performing Arts Institute

Wednesday, May 25
This one is technically sold out, but its worth lining up for day-of standby tickets at Town Hall to see local treasure Lindy West talk about her new book Shrill: Notes From a Loud Woman. Whether she’s talking about feminism or fantasy novels, West is just as hilarious in person as she is in writing and has a preternatural ability to make people believe we can change the world, and ourselves, for the better. Who doesn’t want that? –Gemma Wilson
Town Hall

Wednesday, May 25
Comedy Bang! Bang! is a weird and wild vehicle for some of the alt-comedy world’s most talented improvisers. Host Scott Aukerman plays friendly, fastidious ringleader to a rotating stable of recurring characters and celebrity guests. For this live, touring version of the IFC show based on the podcast, he’s joined by one of the funniest comedy podcast guests of all time, Paul F. Tompkins, along with Lauren Lapkus (Orange is the New Black) and producer and head writer Neil Campbell. –Brett Hamil
Moore Theatre

Saturday, May 28
After reading 26 Songs in 30 Days, Greg Vandy’s history of Woody Guthrie’s legacy in the Pacific Northwest, I’m desperately curious to visit the Grand Coulee Dam. As Vandy describes, Guthrie’s 26 songs were inspired by the dam and the massive public work project that built it, as well as the irrigation it would bring to an arid region ready to receive transplanted Dustbowlers from the midwest. Guthrie knew of the environmental devastation the dam would bring yet believed ultimately in its power to recreate the landscape for human habitation. The story is deep—I highly recommend the book—and readers can get a full taste of it this weekend as Vandy hosts Woody Guthrie Day at the Grand Coulee Dam, a full, free day of music and conversation about this fascinating chapter of American history. Performers like Joe Seamons, Mindie Lind, Country Dave and the Annie Ford Band will give life to Guthrie’s famous songs while Vandy and other scholars give presentations inside the Grand Coulee visitor center. If you appreciate history, scenery, music and enormous earth-shaping expressions of man’s hubris, head four hours east this weekend and do the dam thing. –Jonathan Zwickel
Grand Coulee, WA

Saturday, May 28
Kaytranada is the mutant sound of right-here-right-now. The Haitian-born, Montreal-based producer/DJ remixes fellow forward-thinkers like MIA, Pharell and Robert Glasper and releases his own a mutant form of electro-soul music that warps hip-hop, jazz and house into a digital-smooth swirl that simply swings. His set at 2014’s Decibel Festival was one of the weekend’s prime highlights. His set tonight is sure to include newness from his XL Records debut, 99.9%, out this month. –Jonathan Zwickel
Showbox