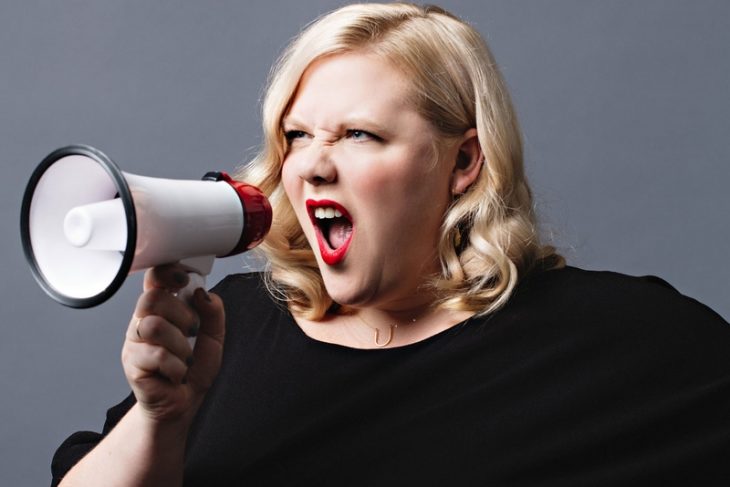 By way of introducing Lindy West’s April 15 multimedia talk at Benaroya Hall, let’s start with the event’s title: “The Witches are Coming.” Last fall West—Seattle writer, thinker and activist extraordinaire—addressed a big issue of the day in her New York Times column, namely Woody Allen’s choice to weigh in on the allegations of sexual harassment against Harvey Weinstein. For your enjoyment, the first paragraph:

“It is unclear what possessed Woody Allen, of all people, to comment on the accusations of sexual predation against Harvey Weinstein, when he could have just not said anything, not expressed sympathy for an alleged serial rapist, not accused long-silenced women who said they were sexually assaulted of contributing to ‘a witch hunt atmosphere’ and not felt compelled to issue a pouty follow-up statement in which he didn’t apologize but, in fact, reiterated how ‘sad’ he feels for Weinstein because Weinstein is ‘sick.’”

The column is brilliant but the best part is the headline, which West had apparently been waiting (or waiting to be allowed) to deploy for years: “Yes, This Is a Witch Hunt. I’m a Witch and I’m Hunting You.” It’s classic West, clever and incisive, the pinpoint accuracy reclaiming a willfully misinterpreted idea (West: “Pretty sure it wasn’t all the rape victims in Salem getting together to burn the mayor”) while almost flopping over with exhaustion at the absurdity of this goddam conversation. When West turns her attention to an issue, her critical powers focus like the Eye of Sauron, if Sauron was bent on making the world a better and funnier place instead of an endless night full of terrors. Now she’s bringing that generous, laser beam-energy to Benaroya, and we caught up with her to find out what this whole “multimedia talk” is all about.

What is a multimedia talk and why are you making one?
Well, Gemma, it’s just a humorous PowerPoint! When I first started talking at colleges they wanted me to talk about online harassment, so I would talk about being at Jezebel and writing about rape jokes, and then I would show like, what a day on Twitter looked like for me. It was horrible, obviously, so then I would be like I’m sorry here is a slide of a hippo and a turtle who are best friends. Big hit, lemme tell you. So, I thought, it would be weird to go on stage at Benaroya and just talk for an hour, maybe I will create another humorous PowerPoint, my inspiration being to give people relief from the horrors of sexual assault and online harassment with cute animal photos.

So, what’s it going to be about?
I think I’m gonna do like a field guide for men who are very worried about the new world. I was on KUOW recently and they asked me about this poll that said like, 60 percent of men think it’s going to be harder to interact with women at work now. And they said, can you give men some tips? And I was like, just don’t touch people’s genitals? I don’t know what to tell you. [laughs] I think I’m going to expand on that and do a series of tutorials, among other things. That was a flash of inspiration I had because apparently, the men need help! They’re very concerned.

Are you hearing this kind of confusion a lot yourself?
Certainly on social media there are men who are like, any of us could be taken by the mob at any time. No, not really, just don’t sexually harass people, why is this confusing? By the way, you should have already been not sexually harassing people. It’s not like this is new, there just haven’t been consequences before, and there still are only kind of consequences.

Right, you might be embarrassed, or fired, maybe.
Right, and I can joke and be like just don’t touch people’s genitals, but it’s about intimidating women and making women feel like they don’t belong in the workplace, reminding women that they’re not full human beings. That’s a system of power that has huge repercussions. I’m just saying, the fact that men are all concerned about being mildly embarrassed or mildly stifled at work, compared to the problems that #MeToo is attempting to remedy is just silly. Stop being silly, you guys.

So the talk will be a combination of wacky and serious. I find the Trump era very demoralizing, and I tend to just sit in my house and drown in despair. Turns out, it’s really helpful to get out of your house and be around other people who care about the same things that you do, to remind yourself that you’re not alone and that there are a lot of people working hard to try and save us. There’s power in a collective. In a lot of ways, we’ve abandoned that idea. Everything is like, oh, we don’t need unions, everyone can just be an Uber driver! Or like, we don’t need public transit, everyone can just…be an Uber driver! No! [laughs] Anyway, I want the Benaroya event to be a big, funny, fun, loud, goofy rally.

Did you consider saying no?
It’s definitely intimidating, and I swore that I was going to say no to everything this year because I have to write this book by September. But it was too big an opportunity. It’s my hometown and my big fancy Benaroya Hall debut! It was very flattering and a great opportunity and, you know, I also believe in the stuff that I’m gonna talk about. I know that, for whatever reason, stuff I write resonates with some people, so if it would be fortifying for those people to come see me talk and we can all have a laugh and a cry together—this is so corny!—then that’s great.

You’re working on a book that about how we got to this point as a country. Is the book, or the research for the book, part of this talk?
Sure, it’s all the same stuff. I think of Shrill as a culmination of my time at Jezebel and all the stuff I wrote there, like body stuff and feminism and gender and vulnerable, personal narrative. This next book, I’m thinking of as an extension of my work at the Guardian and the Times. It’s more political and has more cultural analysis and is a little bit more, I don’t want to say serious because hopefully it will be funny, but it’s not a feelings book as much as it is an analytical book. The book is about how we got here to this present moment through the lens of pop culture, so what have we been watching and reading and making for the last 50 years? Especially what have our young white men been consuming that brought us here? What assumptions have we been fed about each other and about ourselves? So that has to do with all the same stuff. Media has a huge role in teaching men how to treat women and teaching women what to demand and what to think they deserve—it’s all connected.

If Shrill was taking all of your most painful personal memories and making them into a book, where are you starting with the new book? I know you watched the Ricky Gervais Netflix special for your column, which seems particularly grueling.
This book is way more research-heavy. I’ll probably expand that column into a chapter about the way that people age and stop being elastic. For whatever reason people stop learning and stop changing. I probably shouldn’t talk about it too much, but I’m watching and reading a lot.

Do you get nervous public speaking anymore?
Nah, not really, only if I’m unprepared, which I definitely will not be at Benaroya! My favorite part though is the Q&A.

Why?
I don’t know, I just feel like I really shine in a Q&A! [laughs] I’m genuinely curious to hear what people are thinking about. They’re fun.

I think people are really scared of being challenged, scared that someone is going to call them out and they’re going to get yelled at. When someone in a Q&A is like hey, it kind of seems like you overlooked this thing, it’s just an opportunity to fix a mistake that you made, and what’s wrong with that? It was clear to me very early on that the only good solution to being called out on something is to listen and apologize. Otherwise, everyone just yells at you forever, and also you did a bad thing! I don’t want to do a bad thing, I don’t want to be a toxic presence in the community. I mean, I’m not going to be nice to shitty anti-feminist men, but if it’s good faith criticism from someone I respect—by which I mean anyone who seems to be a reasonable, earnest human being, even if they approach me in anger—then I listen.

See Lindy West: The Witches are Coming on Sunday, April 15 at Benaroya Hall