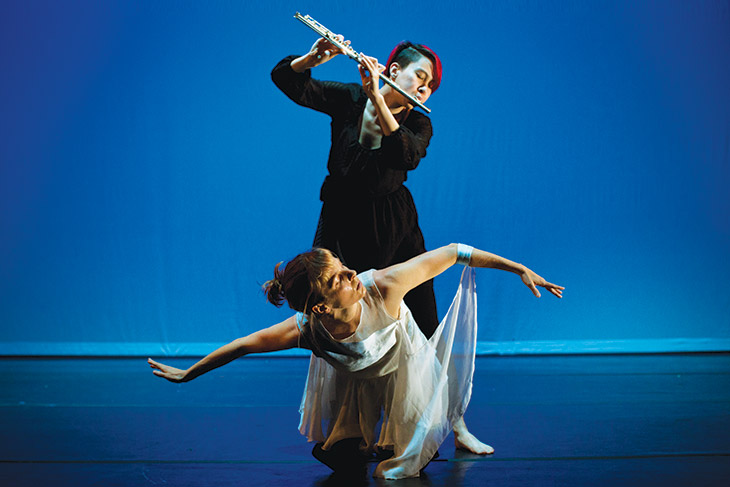 “I’m interested in creating space with sound,” says Eaton, whose compositions frequently use digital technology to expand upon traditional classical idioms. LUNG is commissioned and co-conceived by Karin Stevens Dance, and the musical performers are drawn from Seattle-based experimental chamber troupe Kin of the Moon (of which Eaton is a member) and LA-based new-music duo Strange Interlude.

LUNG unfolds across three movements, beginning with the airy breathing of two wind instruments, played by flutist Leanna Keith and clarinetist Rachel Yoder, who move through the theater like air moving through the lungs. The music builds to incorporate violist Heather Bentley, harpist Lily Press and cellist Simon Linn-Gerstein, who are stationed onstage as the heart of the lung diagram. Musical depictions of heartbeat and breath gradually swell into an explosion of energy, the loudspeakers threatening to overpower the musicians before reaching a tranquil release: a unison chant voiced by both the musicians and accompanying dancers Karin Stevens and Amelia Love Clearheart.

For Eaton, a classically trained soprano and voice teacher, voice is a critical component in her music. “When I’m teaching voice lessons, I’m teaching people how to breathe, how to take in enough air to make the kind of sound that they want to make,” Eaton says. “That is a very practical, physical skill, but it also has huge metaphorical implications.”

LUNG explores how breath can give way not only to voice, but also to serenity, community, openness and a sense of self. Stevens traces those breathing patterns through dance, moving through the audience and exploring where the air we breathe sometimes gets stuck. Her choreography is inspired in part by her ongoing study of the Five Elements in Chinese philosophy, in which the lungs are understood to be the place we hold sorrow.

“We all have things that get stuck—obstacles, trauma, grief—that hold us back from a full expression of deep breath, inhalation and exhalation, and that metaphorical idea of fully being,” Stevens says.

Alongside LUNG, the same cast of musicians will perform Eaton’s 2017 electroacoustic opera lily [bloom in my darkness], which tells the story of Eaton’s great-grandmother, an orphan who fled England at the start of WWI. The opera imagines a dream Lily may have had during her first night in the Pacific Northwest wilderness, scored for voice, chamber ensemble, live electronic processing, dance and pulse sensors that read Eaton’s heart rate and use the data to alter the pitch and texture of the viola.

lily is about dreaming and LUNG is about breathing, but both are about transformation and creation, about the narratives that are trapped deep within our lungs and how we set them free.

“I want to shake things—literally with how loud [the music is] in the speakers—but I also want to shake people,” Eaton says. “I want them to feel some kind of release.”