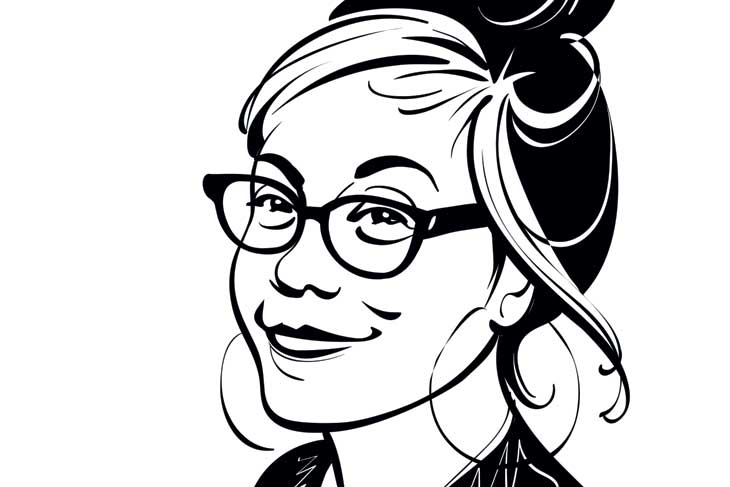 Angela Garbes’ food writing possesses a visceral, textural quality, her funny, curious prose dedicated as much to cultural experiences as descriptions of how food tastes. After her first daughter was born in 2014, Garbes took a full-time food writer job at The Stranger and followed her commingling interests in food and motherhood into a feature story on breast milk, which became the most-read story ever on the alt-weekly’s site. Four weeks after giving birth to her second baby in March, Garbes and I sat down to talk about her new book, Like a Mother: A Feminist Journey Through the Science and Culture of Pregnancy.

Did you have an audience in mind when you wrote Like a Mother?
I wrote the book that I wanted and that I thought my friends wanted, based on the amount of information we were trading and the questions that kept popping up among people with generally good access to health care and information. The origin of the book was [the] piece I wrote on breast milk that went viral.

I sent that to so many people! I don’t have kids and I found it fascinating.
Thanks! When I pitched the feature I was like, “I’m a food writer, and at this point I’m producing food, eating food, thinking about food and writing about food all the time.” Food is a reflection of culture, how we live, our values, our lifestyle, and I felt like breast milk could be that, too. I wrote it in a way I hoped would be interesting to all women, anyone interested in female reproductive health or in the body and science. That’s what I wanted to do with the book, too—because we’ve never valued female reproductive health, or female health at all, from a cultural, financial and scientific standpoint.

While reading Like a Mother I found myself toggling between immense gratitude for its existence and valkyrie-level fury that it couldn’t exist before.
Yeah, the institutions and culture we live in aren’t set up for women, they’re set up mainly for white men. Health inequities and disparities are relevant to everyone—whatever your politics are, we should all care about that on some level. But the book changed a lot during the writing. When I started I remember thinking, when it comes out we’ll probably be talking about paid family leave at the federal level, because we’re probably going to have a female president. Then the world changed and I went to a very dark place, because once you start researching female reproductive health you realize that our personhood is up for debate and it’s being legislated away. It’s difficult to write about that and feel hopeful, or not feel really angry.

It feels almost counterintuitive that the word “feminist” should be necessary in the title of a book about an inherently female subject, because theoretically those books should all be feminist.
They are very much not! The main way we present everything about pregnancy and motherhood is that there’s a right way and a wrong way to do it; there’s a moral framework. That’s bullshit. The sublimation of the mother, or the woman, or the person as an individual is really deep in motherhood, but it begins in pregnancy. It’s wild.

Does publishing your first book about motherhood feel limiting, in the industry?
I’m not the first person to say this, but if men gave birth, birth stories would be part of the canon. But here and now it’s niche and belittled. It’s even really divisive among women—if you want to receive feedback from people that’s reactive and fraught, write about motherhood.

You’ve been a writer for a long time, which I imagine was a big part of your pre-motherhood identity. How do these two pieces of your identity fit together?
I still don’t totally know. I actually stopped writing in 2012. I’d been freelance for years and I was being asked to do more for less money, and it just didn’t feel worth it. I was taking classes at Seattle Central and applying to get a public health degree in nutrition, so I spent two years taking biology and chemistry classes and I worked nights at a restaurant. I can look back now and see that when I wrote the breast milk article, I had a high level of curiosity and comfort with science. Now I feel like everything I’m doing informs what I’ll do next, so we’ll see.

Like a Mother comes out May 29 on Harper Wave, an imprint of Harper Collins. See Garbes in conversation with Lindy West on June 13 at The Summit on Pike, hosted by Town Hall Seattle.