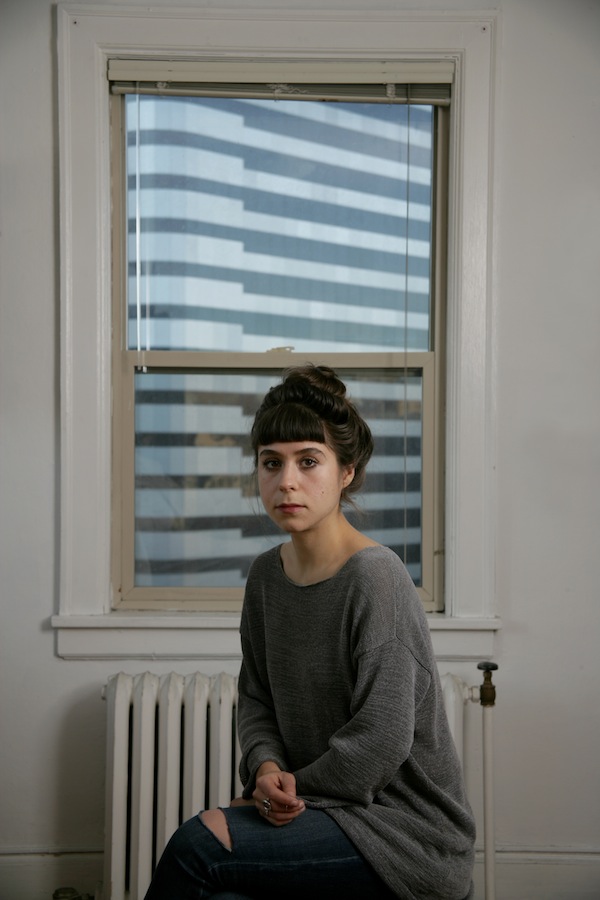 Home to countless artists and the occasional ghost, the El Capitan apartment building is a Capitol Hill icon. Building owner Alvin Hendricks (below) has long supported the artistic community in this town through his fair housing. His first priorities in finding new tenants are referrals and personal interviews from which he’s created a vibrant hive of artistic activity.

I first went inside the El Cap to photograph resident Olivia McCausland for City Arts’ Future List issue, and she graciously allowed a total stranger into her apartment. As Olivia talked about Mr. Hendricks and her fellow residents, I was struck by the sense of community in this place. Together we hatched a plan to document this remarkable building. 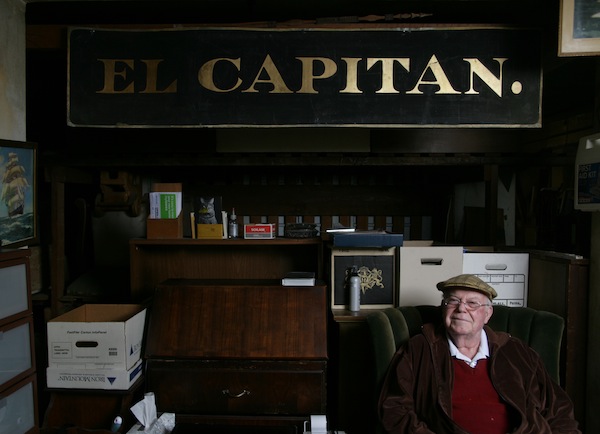 Over the past few months, I’ve photographed some of the many residents of the building and witnessed the way community interacts and helps one another. On some level, these people are family—a group of talented people inspiring one another and pushing each other to higher and better directions. The catalyst behind this unique environment, Hendricks has a couple rules, like 1. Say hello to one another in the hallways, and 2. Attend the annual holiday party. This past December, Hendricks was in the hospital and his son held up a phone and all of the residents sang Christmas carols to him.

The affection between Hendricks and his tenants is mutual. Below are but a few of the artists who currently call El Cap home. 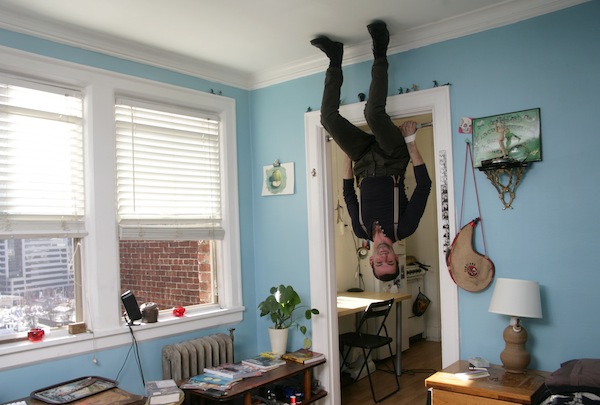 Kevin Ellis is a multi-disciplinary artist doing illustration, sewing, leather working, jewelry—he even created a drag character named Harlotte O’Scara. When I was shooting in the building, I felt a presence other than the living tenants. I wasn’t alone—Kevin is pretty sure his apartment is haunted! Occasionally, out of the corner of his eye, he’ll see a blue ghost looming in the entryways and knocking things off shelves every now and then. “Feeling a sense of community, be it creative or neighborhood, is something I’ve been longing for over the last few years,” he says. “But I hadn’t really found until my move into the El Cap. “ 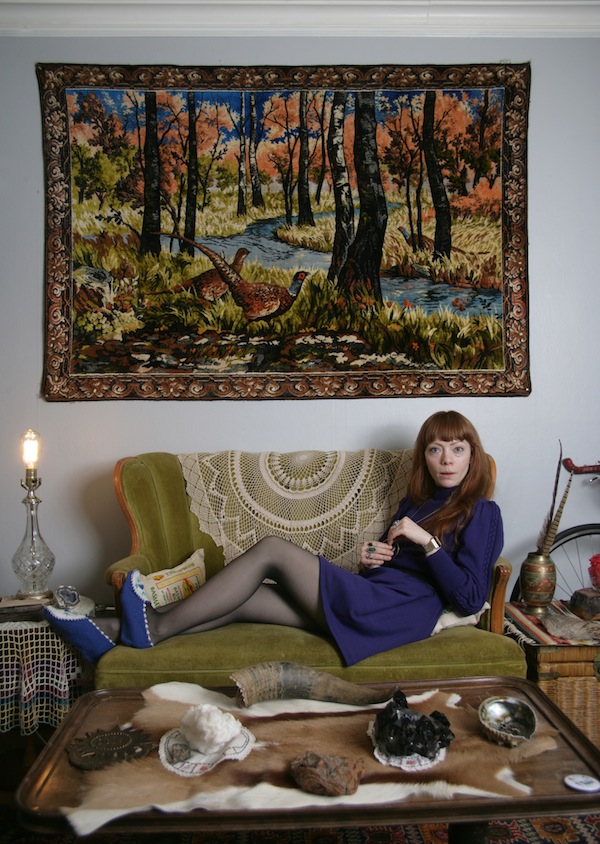 Designer Ruthie Haskell calls her apartment the “Femme Fortress” and has filled it with interesting artifacts and textiles. She says Mr. Hendricks is “a gem. A relic from another time. I feel so privileged to be welcomed into his building. It’s pretty rad to live in a building knowing that the people around you have your back.” 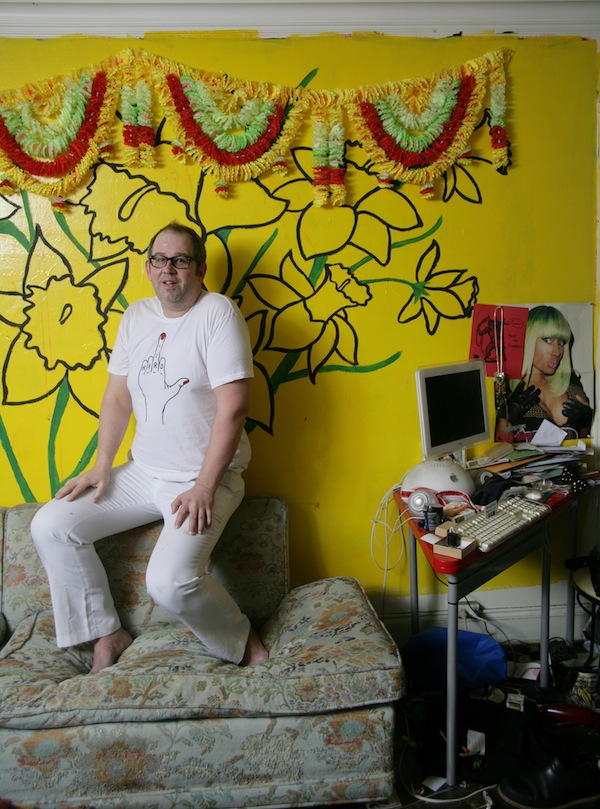 Doug Newman, a photographer focusing on informal portraiture, has lived in the El Capitan for close to a decade.  A friend of his, who never actually lived in the building, introduced him to Mr. Hendricks and he managed to get in when a vacancy opened. The mural Doug is sitting in front of was painted for him as a 40th birthday present from his boyfriend Jason. “I love the vibe here. As Mr. Hendricks says, we have all the colors of the rainbow and live by the Golden Rule at the El Cap. It is like the Chelsea Hotel of Capitol Hill.” 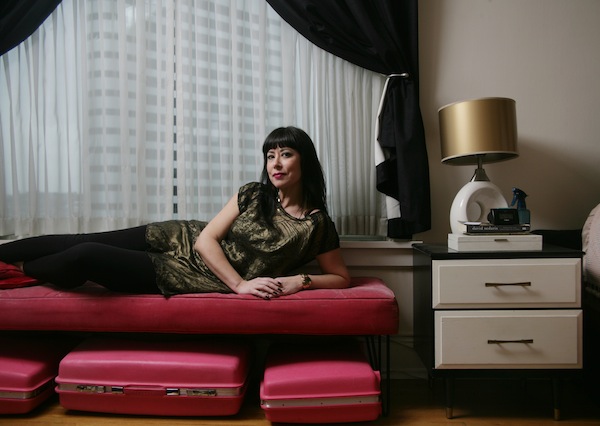 Erin Frost has lived in the building for seven years, after being referred by Doug. “I make work based in intimacy and intuition,” she says. “I’m interested in transformation, perception and moments of potency and shifting beauty.” It’s the people and the space that keeps her at the El Cap: “We know how lucky we are to be here, to know Mr. Hendricks, to live in a beautiful environment with a friend on every floor.” Mr. Hendricks, she says, is a true original. “He’s got a great singing voice, a spark in his eye, and there’s always a chair you can pull up to talk to him.” 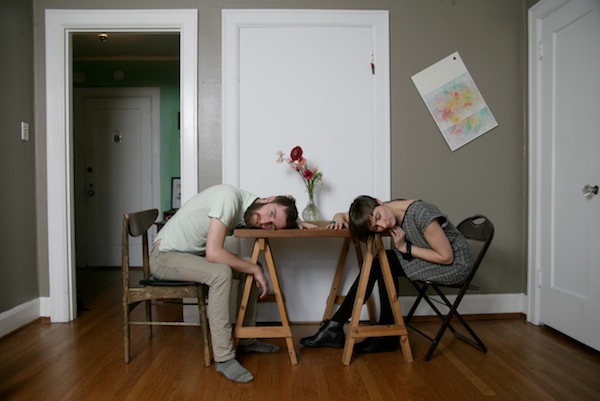 Sierra Stinson has been in the building for four years and Graham Downing joined her in her El Cap one-bedroom three years ago. Sierra is a “curator and enabler” of art while Graham describes his art as “political, high tech and sarcastic.” Their apartment is home to Vignettes, a series of one-night-only events that showcase new work from artists of all mediums. When asked about what they love at El Cap, Sierra’s list was long. “The residence, the ‘free’ piles, the annual Christmas party, Mr. Hendricks, the stairwell skylight, the salutation to the sun at the entrance, the cherry blossoms, walking to work, watching our condo neighbors, the sound of the freeway. Truly.”

Beth Martini, pictured here with her cat Greta, moved into the building less than a year ago. She doesn’t like to consider herself an artist—she’s more a craftsperson with an emphasis on jewelry and metals. She has a large tattoo on her chest that reads Married to the Sea. 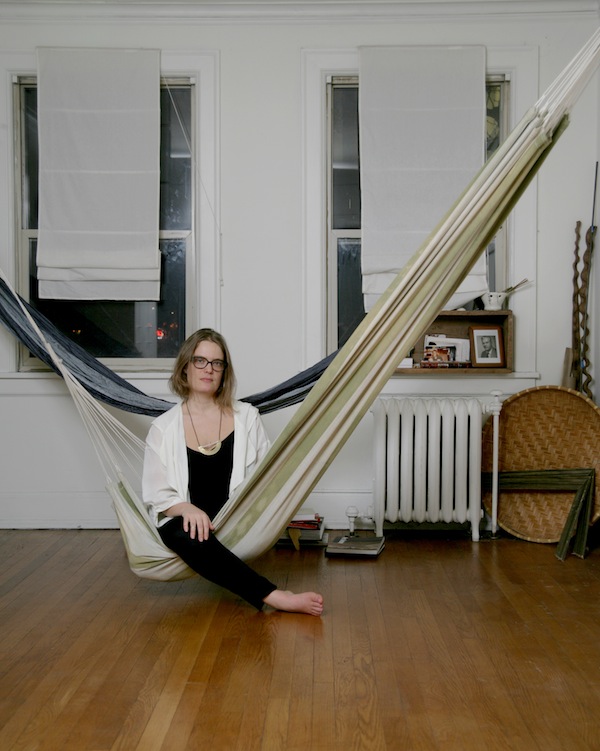 “In general I try to keep a clear mind—imagine infinite space and time for all thoughts, movements, possibilities and actions, so I like my spaces to be the same way,” says designer Amber Murray, a three-year El Cap resident. Some of her favorite moments at home occur when there is a random fire drill in the building. “We get to see everyone all at once for a change. Cats held tight in jackets, important hard drives clasped, funny pajamas hanging on… a peek inside of all the closed doors without going in.” 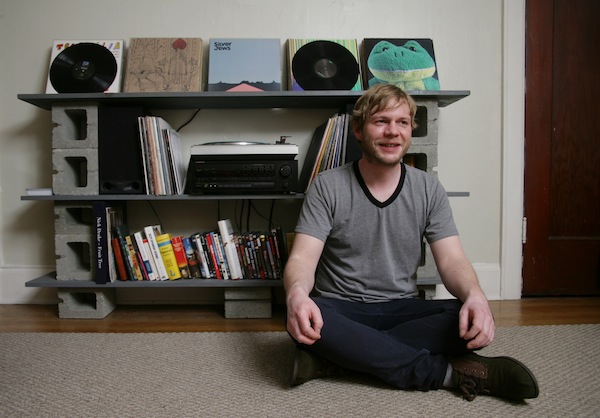 Andrew Berg is a musician and cook who’s lived in the building for under a year. After working a long day at Pike Place Market, he enjoys his minimalist environment. “I feel incredibly safe here,” he says of El Cap. “The sense of community that Mr. Hendricks has created is not only felt by his tenants, but also by its visitors. I’ve lived in many other places across the globe, and I’ve never felt such a sense of community.” 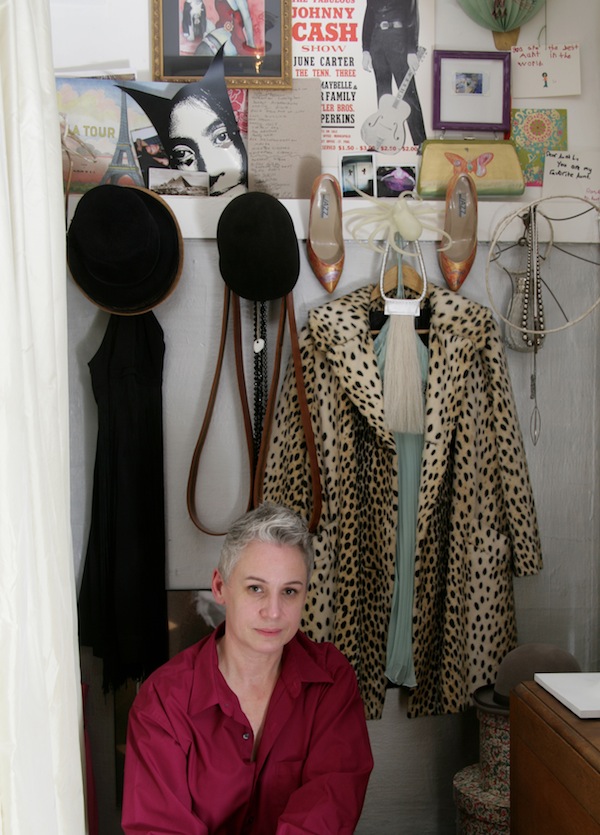 Eight years ago, Mr. Hendricks told Lynda Sherman he had the perfect apartment for her. Turned out he was right. “The light in mid-summer evenings is divine,” she says. The best thing about living in the El Cap—or what she calls “Paradise” (“and when you say Paradise, you have to swirl your index fingers in front of your eyes”)—is stepping over the Rumi quote cast by artist Jana Brevick and mounted on the outside entryway. “Mr. Hendricks is an artist and his medium is The El Cap.” 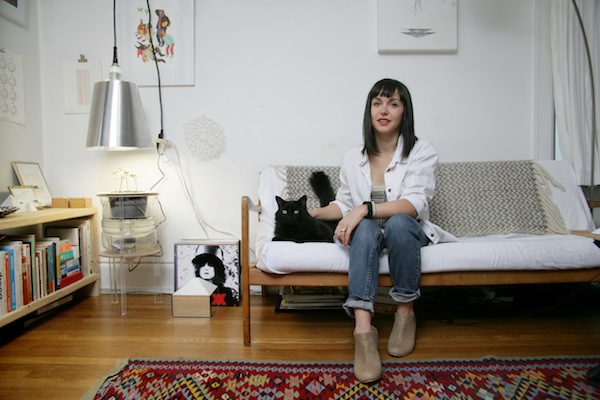 Kate Bailey, who describes herself as “One-quarter cup artist, one cup industrial designer, one cup curious kid,” has lived at the El Cap for five years.  She recently moved to a one-bedroom after being on the waitlist for almost all of those five years. Here she is with her cat, Mal. “I live in the El Cap so I can spend more of my time, money, and energy on my projects! No house, no problems.” 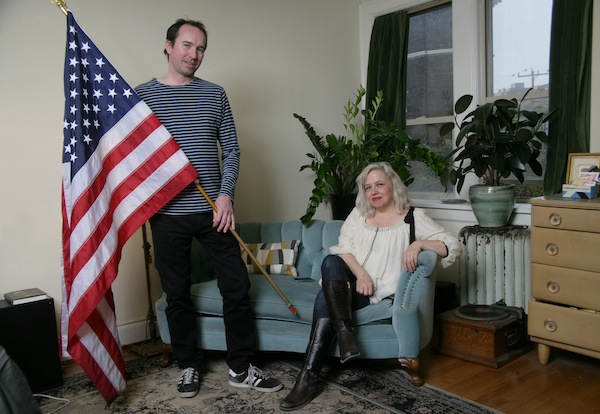 Tina Randolph is a full-time artist and part-time designer, problem solver and businessperson. She’s been in the building for four years and moved into a one-bedroom with her partner Shawn Brown after about a year. The dark, “goth” apartment they inherited needed a lot of work, but Mr. Hendricks allows tenants to create their own unique spaces and she and Shawn lightened and brightened the place to the point it’s at now. “Knowing so many of your neighbors, talking to them about their creative endeavors, and just being able to say hi are some of the joys of El Capitan living,” Tina says. “It feels as if these simple pleasures are getting lost on the new Capitol Hill.”

Olivia McCausland was the first person I met at El Capitan and was essential in making this project happen. I was struck by her love and admiration for the building, its tenants and Mr. Hendricks—traits I found in everyone I photographed. She loves to facilitate the creativity of others and is inspired by her fellow tenants. What is the best thing about living at El Cap? “The wonderful community. The entryway. The individuality of each apartment. The Hendricks family. The relentless sound of the freeway.” 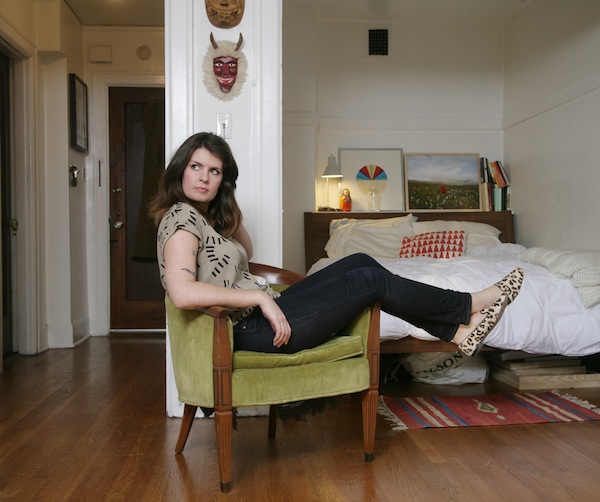 Stacey Rozich is an illustrator and artist who describes her work as “folkloric situational vignettes done in watercolor.”  She’s technically now an ex-resident of the building as, shortly after I photographed her, she moved to Los Angeles. “I do miss the people in the building and the big blooming cherry blossom trees in the front that really gave the area is peaceful air. (We) would joke that it felt like a sorority sometimes because we could walk down to one another’s apartments in our socks to have wine and brainstorm projects in the evenings. You could see people in the elevator and catch up on their lives and then go to your door and be in your own private space. As someone who works from home that kind of human interaction kept me from feeling like a lonely hermit.”

Mike Hipple and Olivia McCausland’s show “HOME: Artists of the El Cap” will also be on display at Glasswing, beginning May 8.