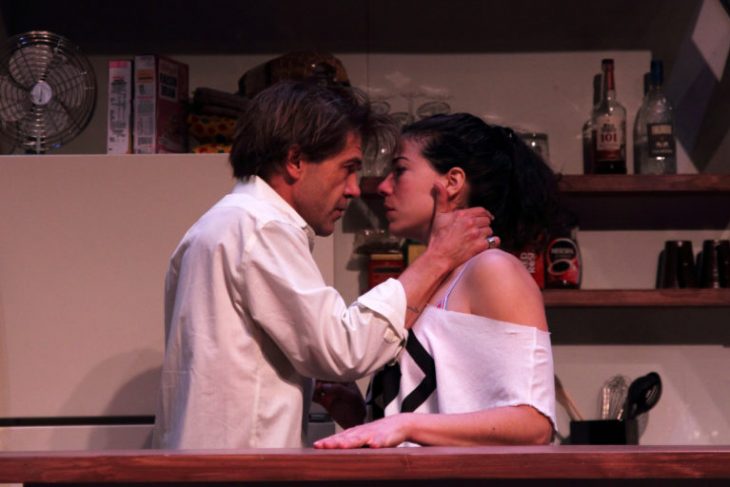 A few months ago, a very drunk friend of mine confessed, in that too-loud drunk way, “I’ve never dated a real bad boy. You know, a real James Dean type.” I’ll never let her live it down, because what a weird thing to say, but I’ve been thinking about the ideas behind it ever since—is the idea that women are attracted to “bad” men even real, or is it a story we’ve been fed so often we believe it? Is it a way to justify unjustifiable behavior? A response to women’s long-standing powerlessness?

All this lingered in my mind as I walked out of Theatre22’s sensitive, quiet production of Burn This at 12th Avenue Arts. The Lanford Wilson play is both a small story and an emotional epic that manages, in a quotidian way, to touch on love and grief, art and commerce, friendship and sexuality, stagnation, evolution, chosen family—and it’s about a woman learning to make her own choices and find her own way. Corey McDaniel directs with obvious tenderness for his wounded characters, aided by the one-two punch of Margaret Toomey’s set and Robin Macartney’s props design, which is pitch-perfect from the plastic pitchers in the fridge to the loft’s brushed metal door. Even in downtown kitchen-sink plays, details matter.

Anna (Carolyn Marie Monroe) has just returned home to her way-downtown Manhattan loft after attending the funeral of her friend, roommate and dance collaborator Robbie, who recently died in a freak boating accident, along with his boyfriend. Joined by her boyfriend, Burton (Jason Sanford), and then her other roommate and friend, Larry (Alex Garnett). Time passes, conversation meanders as conversations do: the funeral, Anna’s realization that none of Robbie’s family knew he was gay, Burton’s new screenplay, Larry’s work in advertising. The smallest realizations are the most heartbreaking—“What are we gonna do about Robbie’s mail?” But they’re all coping, they’re all living, life goes on. Until Robbie’s volatile older brother Pale (Tim Gouran), bursts in on Anna late one night, drunk and belligerent, looking and sounding for all the world like he got lost on his way to Glengarry Glen Ross—lizard shoes and tan suit in a world of downtown dancers.

Burn This opened on Broadway in 1987, starring John Malkovich as Pale and Joan Allen as Anna. While the play’s ‘80s trappings are integral, Wilson’s deft, personal writing lands in any era, rooted as it is in empathy and universal human behavior. Robbie’s death has thrown Anna’s life into a personal and professional tailspin; she’s lost in life without her friend and lost in work without her collaborator. It’s the abrasive, explosive Pale who jolts Anna back into herself, even if it’s a version of herself she’s not sure she knows yet.

Larry and Burton aren’t really full characters; Larry is essentially comic relief, and Burton is Anna’s alternative to Pale, designed to be the epitome of safe and boring. Garnett and Sanford dispatch them ably, though everyone could stand to listen a little more deeply; there were more than a few jumped lines and some awkward delivery of dated language and syntax.

Monroe brings a lovely physicality to Anna, with a subtle turnout and upright dancer’s bearing. Gouran’s Pale stalks the stage, raging and spewing, and generally being an asshole to anyone who does anything he doesn’t like. It’s a delicate dance, the different ways Anna and Pale externalize their grief, but watching them fall into one another scraped at the limits of my imagination. With too-little chemistry in play, you have to intellectually buy into their union—two grieving people, circling the emotional drain, clinging to someone, something. And I just couldn’t do it. This is Anna’s story; she’s the one growing and changing and making choices, good and bad, for herself. She’s the one who, as Larry points out, has “never had to carry her own passport or plane tickets.” As a choreographer, she’s paralyzed, afraid she has no experience to draw from, or that she’s too chicken to let anyone see who she really is.

I’ll say it again: This is Anna’s story, and Pale is only part of it, no matter how much oxygen his character sucks up. Pale is a dick, but really, he’s a secretly wounded tough guy—and do we need that character anymore? Perpetuating the idea that how someone acts is fundamentally different from who someone is doesn’t hold water in 2017. We’ve come to understand the Pales of the world differently in the last 30 years, and this play is elastic enough to stretch with it, if we’re brave enough to ask it to.