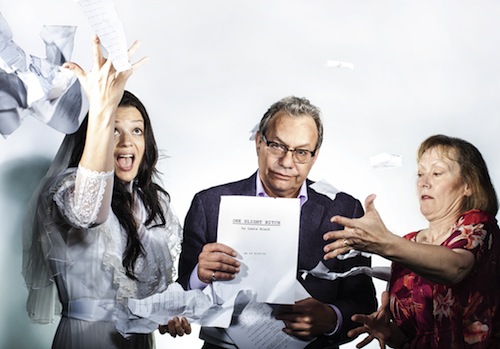 Lewis Black is known less as a playwrite than for his stand-up comedy and commentary on The Daily Show, delivered with caustic firepower that flouts all conventions of good manners to tell the truth as he sees it.

So why has he written such a conventional, well-mannered play?

One Slight Hitch, now running at ACT’s Falls Theatre, is a thoroughly flogged form, the wedding farce. Here we have, as we always seem to, a prosperous family flailing over the arrival of floral arrangements and quality of the shrimp, a mother’s need to have everything perfect colliding with the bride’s uncertainty that her chosen groom is really the one. The father merely tries to get through the day with his dignity intact.

The “hitch” arrives in the form of the old boyfriend, a failing writer who claims to be just passing through on the wedding day.

As Black’s comic persona would unflinchingly point out, Boy, we’ve never seen that before.

And while the play offers plenty of the familiar, it never delivers what it sets us up to expect. It establishes us in the 1980s through P.B., (Katherine Grant-Suttie), the teenage daughter with a bulky walkman firmly affixed to her hip, bopping to the tunes of Blondie, Rick Springfield and Kim Carnes. Rather than being our Virgil guiding us through bridal hell, she quickly fades into the background, and the decade of indulgence proves to never hold any significance at all.

There are plenty of laughs, with comedy grounded in Black’s fierce wit, and the deft balance of Marianne Owen and R. Hamilton Wright as the jaded Colemans, the parents of a thirty-something bride. Wright lends Doc the quiet fatalism of a man cast as a bit player in his own household full of women, while Owen allows Delia’s stresses to quietly build to the point of clawing the bottom of her husband’s medical bag for sedatives.

By the time Shawn Telford’s Ryan invades the house, a clueless schlub that Black has based on his younger self, we have witnessed the uncertainty of Courtney’s commitment to her matrimonial choice. As Courtney, Kimberley Sustad straddles the confidence of a woman confirmed in her artistic career as a well-published writer with neurotic second-guessing.

It’s Doc that has the task of getting Ryan out before Courtney and Delia find out he’s there, a task complicated by sister Melanie (Kirsten Potter), who is both cynic and romantic enough to want to steer Courtney away from the punctilious perfection that is her fiancée Harper (John Ulman).

Hitch is an attempted renewal of one of Black’s works of 30 years ago (and the only apparent reason for a 1980s setting), an effort that long predates his established style. And it is infused with a younger man’s timidity that director Joe Grifasi seems to have internalized. The doors of scenic designer Robert Dahlstrom’s lavish set get a workout as the players dash through them, but they never slam as a farce requires. They close with the gentility of their posh suburban setting.

In the end, Black’s Hitch offers a light dalliance, with some things to admire, but little to grab the heart. It’s okay for a night, but not worthy of a commitment.