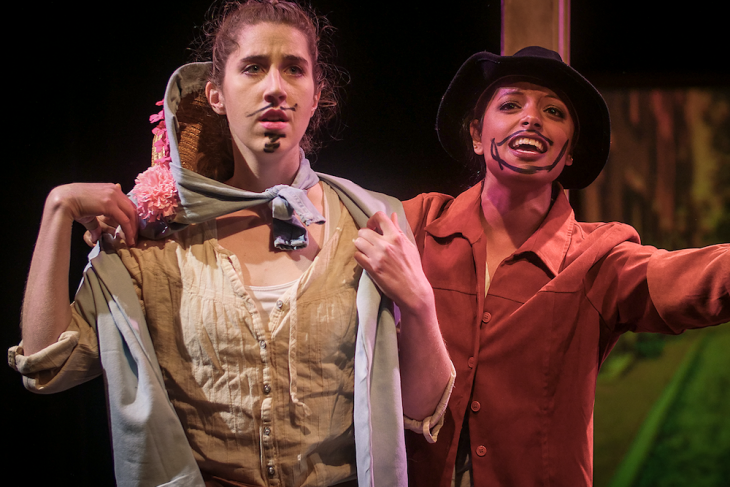 History is littered with “great man” narratives, oversimplifications that dismiss nuance in favor of a grand, unified theory of a hero’s accomplishments. That in Western history this hero is almost always a white man is, of course, no accident.

Andrew Lee Creech somewhat punctures the Lewis and Clark mythos with Journey West!, a fitfully entertaining musical from Copious Love, directed by Linnea Ingalls and backed by some nifty solo piano playing by Evan Barrett, who co-wrote the music.

The musical isn’t a genre particularly suited to narrative nuance, so Creech goes the other way, portraying Meriwether Lewis (Jeremy Behrens) as a callously gleeful striver and William Clark (Jordan Moeller) as a drunken idiot. Nevertheless, they get the benefit of the doubt at every turn.

“When you’re male and pale, you simply cannot fail!” they belt out, alongside Thomas Jefferson, played by Matt Dela Cruz with a leering extravagance.

Unsurprisingly, reality is more complicated. Lewis and Clark weren’t exactly lionized during their lifetimes, failing to publish their journals until nearly a decade after their Westward expedition—by this point, Lewis was dead, likely by his own hand.

In Journey West!, Lewis and Clark do essentially nothing worthwhile themselves, co-opting the journals of one fellow traveler and the maps of another as their own and blaming anyone else for their consistently poor decisions. It’s not like there aren’t real reasons to criticize the pair (Lewis’ killing of a Blackfoot Indian goes unmentioned, for instance), but the show is more interested in pointed exaggerations, like having Clark literally kidnap Sacagawea’s (Nikki Suyama) son.

Whenever the going gets rough, Lewis and Clark pump themselves up with the mantra that history will remember them—and no one else. It’s a funny line, even in repeated uses, but it’s also kind of a misplaced dig, given the inextricable association the duo has with Sacagawea.

This fast-and-loose approach plays well in the show’s more broadly comic moments: the meta opening number “Plucky Adventure Song,” a silhouetted birth of Sacagawea’s baby aided by rattlesnake-tail supplements (this really happened), Lewis’ bad mushroom trip where he’s visited by Sasquatch and “American fuckin’ folk legend” Daniel Boone (Sarah Rose Nottingham, with a hideously awesome painted orange beard). Creech’s sense of humor veers from the surreal to the deeply corny—a pun about things getting “rocky” at a Midwestern mountain range is not the show’s most groan-worthy.

Unfortunately, this show also has a predilection for seriousness. Josephine (Kat Schelonka), who with her sister Ruby (Varsha Raghavan) poses as a man to land a spot in the expedition, has a cloyingly plaintive ballad (“A Proper Seam”) and a misjudged Hamilton-esque rap in “The Way Things Are.” Act one closes with a darkly contrapuntal medley, “Nothing Else Matters.” The show’s book feels too frivolous to support these kinds of numbers.

It’s also a little odd that the biggest beneficiaries of Lewis and Clark’s diminished narrative importance are the fictional Josephine and Ruby, rather than the real-life Sacagawea and York (Antwan Crawford), Clark’s longtime slave. Sacagawea does offer some timely advice, but her character is mostly treated as the mystical, unknowable creature history has ensconced her as, and York is most often around to look incredulously at the two incompetent white dudes. (Crawford’s soul-inflected numbers are a nice addition though.)

Journey West! has a solid concept and its cast has enough engaging performers to keep things diverting, but it’s a better show the freer it gets from genre convention and narrative sensibility. It feels like there’s a wilder, more biting show lurking in the shell of this one, just waiting to burst out.

Journey West! runs through June 23 at Theatre Off Jackson.