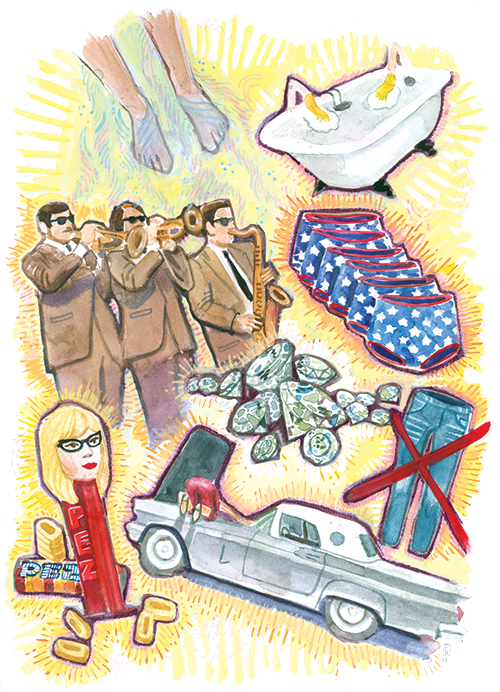 I know that you know that I know some things are simply too much to ask. And yet, the Libra in me wants life to be fair. Or at least slightly more fair. So perhaps this year, the best thing would be for Sofia Vergara to develop a wicked (though short-lived and innocuous) thyroid problem?

I wouldn’t mind seeing James Bond with a stutter, or an STD. Maybe the editors at Simon & Schuster could manage to be less compelled by the former cast of Jersey Shore and guys like Si from Duck Dynasty. He’s got the most viewers in broadcast TV history. He’s the crown prince of duck calls, for fuck’s sake. Does he need a book deal, on top of all that? Is it crazy to think that writers should get those deals, Santa? You could arrange it; I’ll send a list of suggestions, if you like. Leave Si and Snooki to dominate primetime via sound bites and novelty hair.

And concerning the larger injustices of the world: If people must lose their homes or limbs or lives to bombs and typhoons, must be trapped in a Chilean mine for 69 days, the collapse of which is determined—three years later—to be nobody’s fault, couldn’t we arrange a more careful selection of why and whom? I have a working list for that, too—starting with John Boehner, who could likely benefit from three months in the grimy, fetid dark. You know, so he could think about who he is and what he stands for.

But I seem to have strayed quite far from the spirit of Christmas and Christmas lists, which are meant for grand and silly wishes. I’ll admit I have a few; and since you’re the only man in my life ready and willing to ply me with gifts, I should mention I would very much appreciate and take excellent care of a Dusk Rose ’57 Thunderbird and/or a closetful of Wonder Woman’s star spangled panties.

I would not protest at all, Santa, if you felt a horn section might enhance my life. Including but not limited to the tenor saxophone player from Charles Bradley’s band at Bumbershoot circa 2011. We had a moment, he and I, after the show; but in typical fashion I freaked out and ran away, pretending to really, really need a falafel.

But a horn section, Santa. Twelve bells of brass, like the days of Christmas. Guys in skinny ties and Ray-Bans, hounding me like the paparazzi after Kim Kardashian, punctuating my life with a joyful noise: I go to the store; cue the trombones! I fold the laundry, and it’s a parade of Dixieland jazz overtaking the street. I go a week without losing my keys, and all 12 of them burst from the coat closet to give. me. the. funk.

I’d be remiss, Santa, if I failed to mention my other staffing needs. In particular, an intern slightly above the national average in the intrinsic desire to keep my oil changed, wipers fresh and gas tank full. I can’t even add an “if you know what I mean” to the end of that sentence because you of all people know I’d never joke about my perpetual, literal need for a fill-up, how often I’ve run out of gas on the viaduct.

For my stocking, I would enjoy a Pez dispenser made out of my own head and gaping jaw. Self-care, in the form of sour pineapple candy. Unless the elves can manage a Feminist Ryan Gosling dispenser, which I would very much prefer and use quite often. Hey Girl, have some Pez, it could say.

I know it’s a cliché, but diamonds, Santa. Oh, diamonds. Just a few, to carry around in my pocket. But only if they’re mined ethically and not obtained by any means connected to slavery, terrorism or the exploitation of children. Maybe swing by a Canadian mine, on your way to my rooftop? Namibia and Botswana are good, if that’s a more convenient route. But I sincerely hope you’re boycotting Russia, staging a red velveteen, patent leather-covered gay rights protest.

And I’ve mentioned it before, Santa—that one night in the tropics. How the sidewalk ran from the back door of David Morgan’s apartment straight into the ocean; how he and I sat on the hot concrete steps with our feet in the surf, just as the sky was going dark? How we were having a perfectly platonic, civilized chat when out of nowhere the sky opened, sheets of rain drenched our clothes and hair. Steam rose in clouds off the rocks, and we had no choice but to fall into a mad, hot makeout as if Fred Zinnemann were filming the next From Here to Eternity.

I could use another moment like that, Santa. Though if it’s not too much trouble, this time could it be with someone who is not engaged to marry someone else and also not a self-proclaimed drunken bastard?

A self-cleaning bathtub would be lovely, as would an end to senseless killing and propaganda in support of war. No more big-budget action movies where things explode for indeterminate reasons, no more naked dead girls on the small and big screen. No more Salingerian predators, enough with the pedophile coach of the year and every excuse made in the name of religion, politics, money, sports or great art.

Please, this year, Santa could you put an apocalyptic end to the wearing of skinny jeans and/or leggings. And/or jeggings—the horror of which is made far worse by the use of the word “jeggings” as if it is actually a word. Though just to be clear, the apocalyptic end of jeggings is not as important as the careful selection of who ends up in the next underground mine collapse. Or the development of vaccines against cancer, loneliness, homelessness and unrequited love.

I’ve been such a good girl this year, Santa, so boringly, shamefully good. Of all the commandments, I only broke one. Very briefly on a Tuesday, and it was only marginally satisfying. So if goodness counts for anything, count mine.

Forget the Boehner jokes and the intern, my star-spangled panties and Sofia Vergara’s brief and inexplicable weight gain. Start with the silliest, grandest wish anyone ever made. Bring peace on earth, Santa. Bring goodwill to everyone.

Nicole Hardy is an essayist, poet and author of the 2013 memoir Confessions of a Latter-day Virgin. Illustration by Jessica Lynn Bonin.