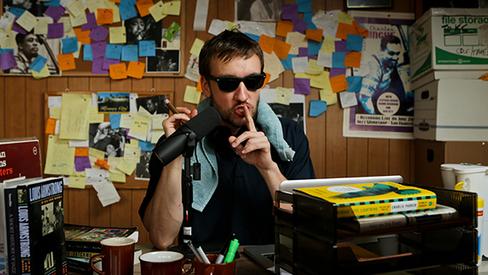 2014 was a big year in the conversation about America’s Greatest Art Form©, yet so many erudite, ultimately irritating articles failed to address the big question: Why should anyone care about jazz?

Jazz has existed long enough that mainstream media doesn’t concern itself with addressing the music directly; writers prefer to address the meaning and the relevance of the music instead. A conversation about a conversation. And so a style that was once bona-fide pop, that many today complain is too abstract for mainstream tastes, is further abstracted, calcified by intellect instead of animated by emotion.

The Holler Sessions is another matter. Frank Boyd’s one-man theatre piece is a vital exhortation on the significance of jazz the likes of which no journal essay or web rant can achieve. It should be required viewing for all musicians, music lovers, pop-culture fiends, artists, art fans and American people over the age of 7. Heard through the ears of a desperately impassioned listener, jazz imparts crucial understanding about who we are and where we’ve been.

As a play, The Holler Sessions all but eliminates narrative and storyline. Instead it begins in medias res: A propulsive jazz song plays on repeat in the dark theatre as the lights come up on a frazzle-haired white guy in a stretched-out polo shirt waking up beneath a desk in a pallid office. He puts on Wayfarers. He takes to a microphone: “‘Moanin” by Art Blakey and the Jazz Messengers. I don’t know how long this has been on.” From word one, actor and audience are involved in a continuum that extends far beyond this small stage.

Through exposition we learn that this haggard, bedeviled dude is a fictional DJ named Ray at a fictional radio station in Kansas City. Right away Ray opens the phone lines to the audience, which he encourages to dial in to a working on-stage phone to answer a true/false trivia question. This happens a few times throughout the performance. The questions are moot, the prizes fake—but the ploy to personally involve the audience in real time is inspired.

From there, Ray riffs. He plays songs by Charlie Parker and Duke Ellington and Ben Webster and Charles Mingus. He talks about them like a relatable amateur musicologist—”here comes the ride cymbal” and “every time I hear Ben Webster play I realize again that horns are played via human breathing.” Jazz is the lens through which he examines American culture, its triumph and amnesia, its obsession with celebrity, its racism, its materialism, its ignorance of the most crucial contributions to its own cultural legacy.

Ray is to jazz what Anthony Bourdain is to food: blessedly self-aware, hopelessly enamored, scathingly articulate and eager to share enthusiasm for one of life’s great shareable pleasures. (Give this man a show on cable!) He makes no effort to conceal his personal attachment to the subject matter—he dances to the music, he yelps and sighs, he admits to the “yolk sac” status of his jazz awakening at 31 years old. Despite the barely sketched nature of the character, Ray’s humanity emerges through his impassioned, walleyed mania, like he’s forever on the brink of screaming or weeping. He chooses the most visceral anecdotes, the most gorgeous tunes, the most powerful analogies to convey his imperative. In Ray’s world, it’s appreciate jazz or die from thirst. It’s not simply history, it’s lifeblood. The show’s surprise finale connects past to present in the most literal possible way.

No other art form deserves so much scrutiny and obsession and celebration because no other art form is as misunderstood. Jazz contains the seeds of everything that followed in American music—swing and country-western and rock and hip-hop and electronic. Its history is the history of modern America, too long and involved and incredible to go into detail here and utterly crucial to our collective identity. And The Holler Sessions works because Ray is right. The consequences of appreciating our cultural bedrock are that great. America’s soul is at stake.

The Holler Sessions plays Jan. 15-18 at On the Boards. Tickets available by wait list only.