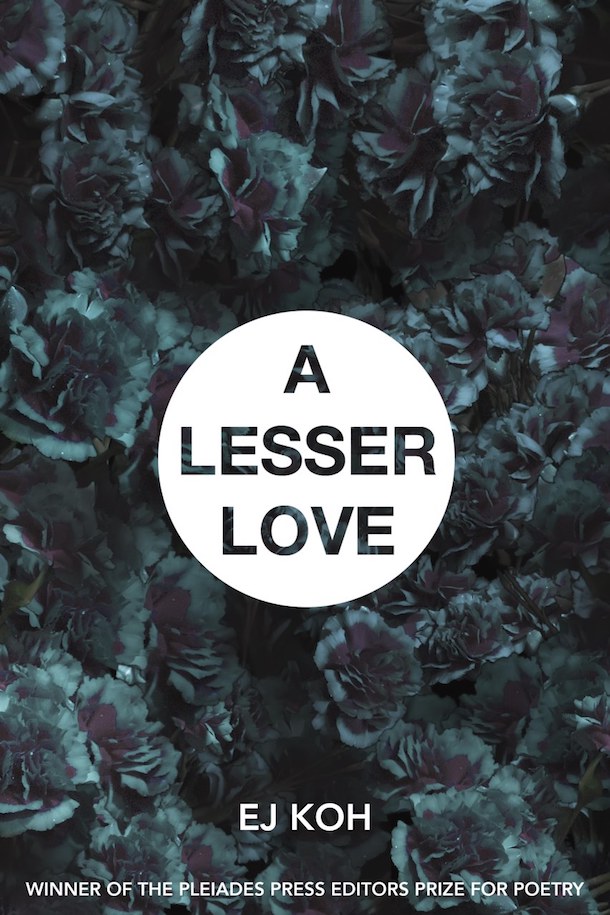 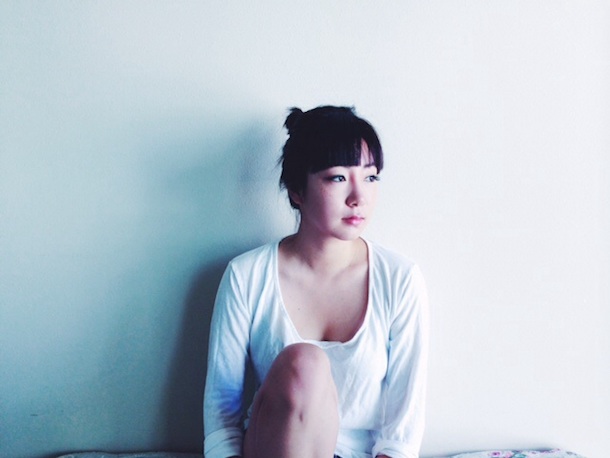 The title of E.J. Koh’s debut poetry collection, A Lesser Love, comes from the lyrics of a South Korean ballad: “Love that is too painful is not love.” Or, as Koh would put it, “Lesser forms of love are still love.”

“Heaven,” “War,” and “Love” are the three sections of A Lesser Love, winner of the 2017 Pleiades Press Editors Prize for Poetry. Published by Pleiades Press, the book is largely an exploration of identity. In “Heaven,” Koh reflects on her own relationship with spirituality and how that was shaped by and contrasts with the religious beliefs of her Korean parents. She worries that religion confines her mother, argues about religion with her dad and alludes to her own belief in ghosts and the spiritual realm. “Heaven” is full of cultural and familial tension, exploring Koh’s ideological bonds and frustrations with her parents.

In “Inferno,” about her dad, Koh writes:

We’re arguing if these rings in hell are just or if our souls are now
at ease with dying. You draw hornets and talons inside.
We sit and don’t speak to one another. Noon walks in.
The air goes warm. Sunlight passes the ledged door.
You say, Isn’t this the sweetness we both want?
If we prove hell, we can want heaven.

Koh explores, in “Heaven,” the limits of her agreement with such a statement.

In A Lesser Love, Koh brings up the subjects that matter most to her for their relevance to current discussions of war, race, media, marginality and materiality. Koh grew up in a “satellite family,” meaning she lived in the U.S. by herself for nearly nine years while her Korean parents supported and raised her from abroad. Satellite families are common among immigrants in the U.S., but, like many common immigrant experiences addressed in this collection, it wasn’t a term I knew before reading this book. America is a country of immigrants, a fact that the idiots currently in power would wipe from the national consciousness—addressing the experiences of recent immigrants so relatably is timely and crucial.

The “War” section is largely related to “Comfort Women,” the generation of Korean women forced into prostitution by the Japanese military during WWII. Koh’s mother and sisters escaped this fate only because they became infected with typhoid, one of many diseases rampant after the invasion. The poems in this section are difficult to read, but necessarily so—Koh claims this narrative for survival. In a poem called “Trilogy,” she writes, “Legend stops the rot of people.” Among the greatest pleasures of reading A Lesser Love is witnessing someone seize power from the forces that have battered her by creating and controlling mythology. In “The Pigeons,” she writes:

Before they died, the soldiers said,
My wife, my mother, let’s meet again at that shrine.
After the war ended,
I visited the shrine but there was nothing, only white pigeons.

Had she not written those lines, nothing of the shrine would have been committed to history at all.

Appropriately, “Love” is the book’s final destination. After struggling with self-harm, depression and an eating disorder, in A Lesser Love Koh researches her past and its evolution into the present. This evolution reaches a satisfying culmination in “Love” by acknowledging that there are no definitive endings and that most often, life’s real prize is the opportunity for more emotional work.

What I appreciate about “Love” is the realism of its reticence after the hard road to it. I was reminded of Richard Kenney’s poem about the birth of his son, how you realize the poem’s gargantuan lyrical effort is just to justify using the word “love” once in the last stanza in such a way that you remember with your entire body what that word really means.

There is nothing I must do but die.
What a joy to let go of all things.
When you ask me the question
your life was born to answer, I point—
what a joy to give up—
to the sky we depend on for its blue face
to turn when you turn unto silence.