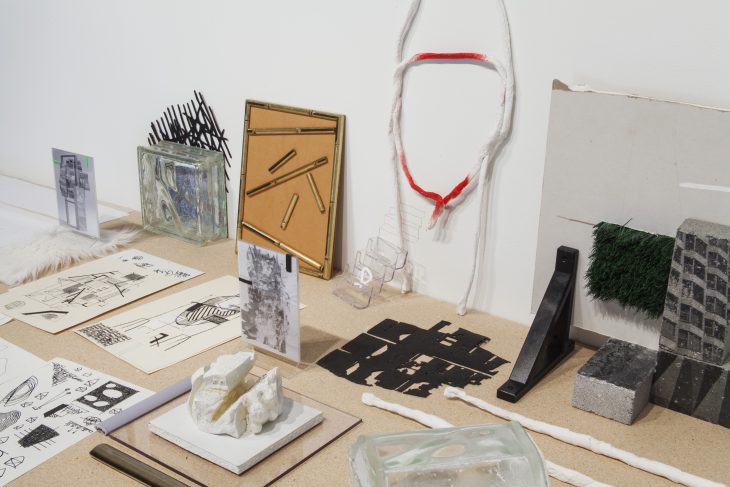 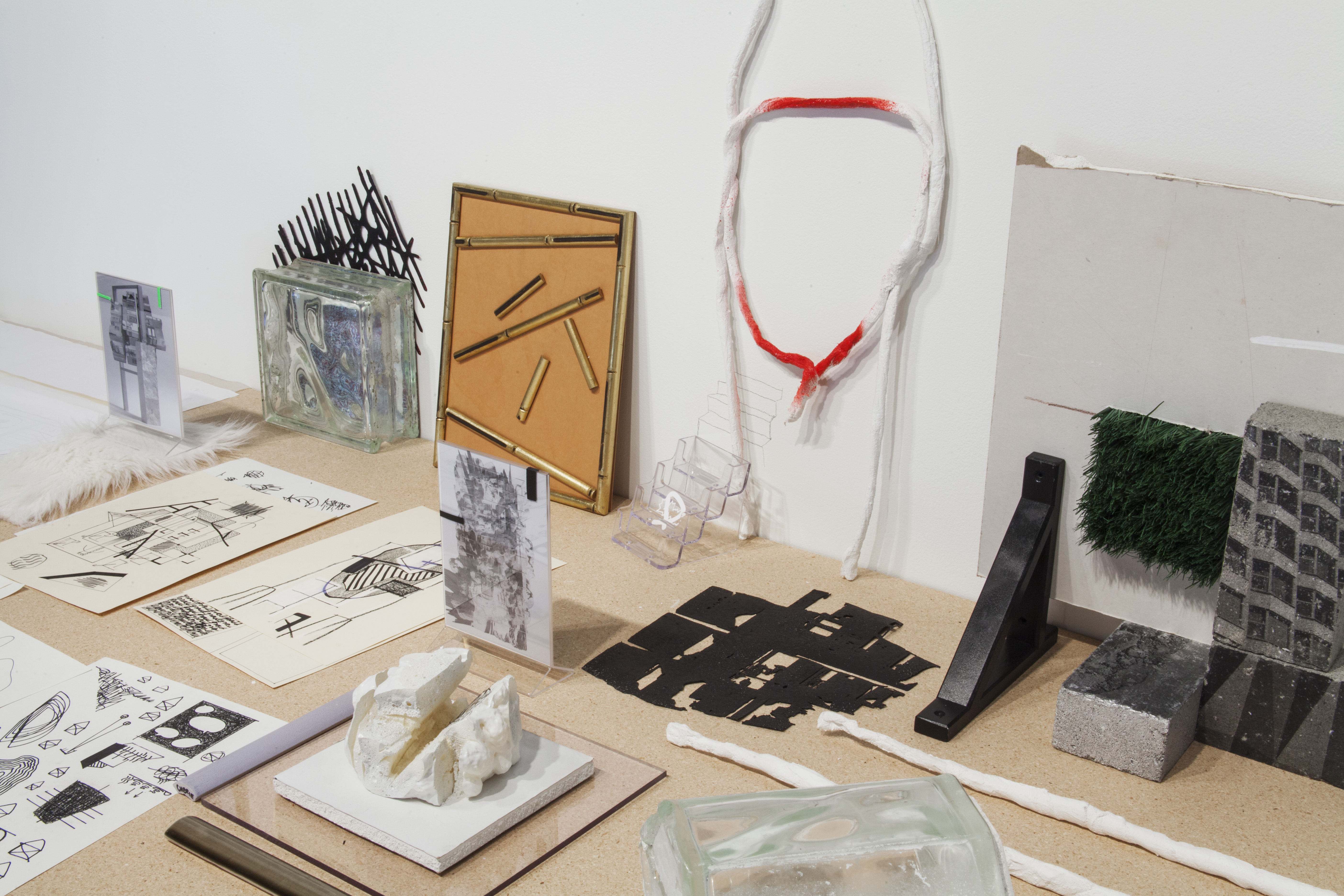 If an apodment and a co-living space had a child, this empty place would be their baby. A camera takes us from a dim-lit staircase to a cold, clean space devoid of personal mementos. Its dweller, a dancer, paws a patch of plastic grass and plush red carpet on the floor, fiddles a rock, caresses the cold metal of the stair railing as though it were made of human skin.

The video, projected on a large screen suspended in the center of Gallery4Culture, is the the nucleus of a group show, Caché, that uncovers the moral and personal underpinnings of unbridled development and gentrification. For the peculiar name, artists Max Cleary, Jackson Baker Ryan and Alex Boeschenstein borrow from advertising lingo and marketing cachet, but there’s more to it.

Caché means “hidden” in French. It also recalls the movie of the same name by Austrian director Michael Haneke. His film zooms in on a bourgeois couple trapped by an anonymous stalker, who sends his “subjects” surveillance videos of their own house. Slowly, this psycho-political thriller shifts into a thorny tale of denial and individual/collective guilt. The movie is a convenient cheat sheet for this exhibition: It too lays bare the feeble foundations of western prosperity and will haunt you in its excellence.

In the aforementioned apodment video, Cleary, Ryan and Boeschenstein take cues from two masters of uncanny suspense, Hitchcock and Kubrick. In using the directors’ tropes of staircases, doubles (two identical red doors in two green houses, two squares) and haunted houses, the trio transmutes Kubrick’s and Hitchcock’s horror to an anxious cinematic tour of a 21st-century townhome. The effect is strangely similar: a creeping unease that echoes Freud’s theory of the uncanny. Repetitions and doubles, he argued, prompt both attraction and repulsion. This cognitive dissonance exposes our hidden impulses, and thus our latent guilt. 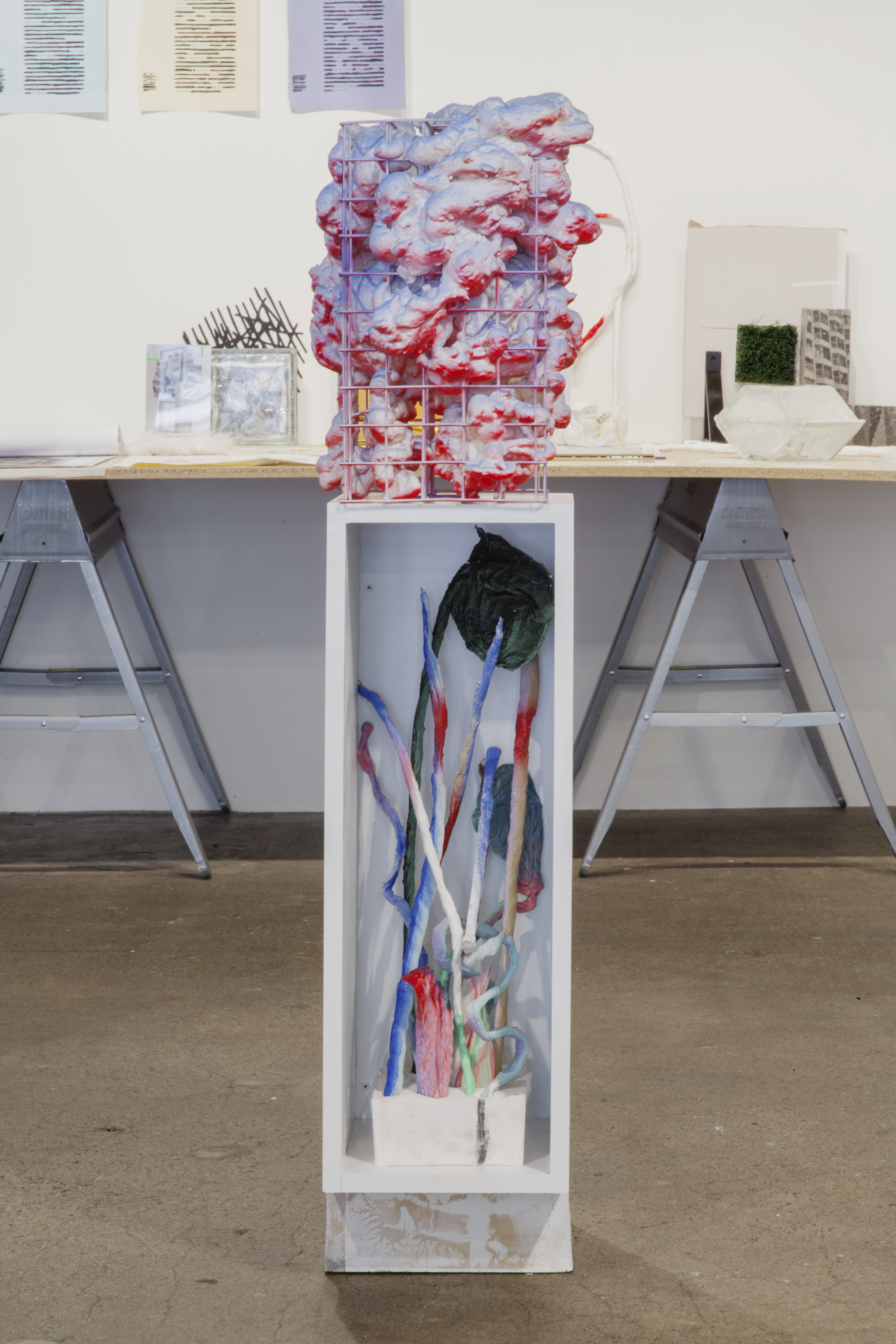 In Caché, the repulsion is in the attraction. The viewer might feel a tinge of guilt after ogling sculptures made from salvaged construction elements or plaster pieces splayed out on a table, or crafting the perfect Instagram post of the geometric framework of a low-hanging grid structure. Why is this display—sterile and purposefully devoid of history—so aesthetically pleasing? I wasn’t the only one caught in the the allure. During a packed First Thursday opening night, the crowd flocked to the exhibit, which could’ve been the Pinterest board of a Seattle architect sprung to life. But the show’s hyper-aesthetics mismatch the subtle unease underlying the work, and that’s exactly the point.

The arrangement of objects, seemingly salvaged from an apodment construction site, might as well be a display of an urban history museum of gentrification. Unlike a natural history museum, nothing’s organic; even the fur and grass are fake. The plaster hoops and ladders, glass boxes and tiles carry too little history to be artifacts.

The sheer volume of objects taking over the space is overwhelming. While backing up to look at the hieroglyphic blueprints next to photo collages and prints of digitally deformed houses, I almost tripped over a tripod draped with a bathmat and, on the floor, a laminated print framed by yellow tape. Even the pedestal carrying a grid overflowing with insulation foam is printed with digital images, its hollow side stuffed with painted plaster sticks. There’s more and more—and then some more. The artistic braggadocio parallels the city’s relentless growth. It conquers the space. As denizens, we can only consume or get out.

On crepe paper in a folder on the table, scribbled phrases intersperse blueprints and black-and-white photos of construction material. Exposure to raw material promotes honesty, reads one—a stab at the bourgeois aesthetics of the concrete-loft look. On the left floats the phrase to be apart from/to be a part of. Another notes, You are one of many, but so is everyone else. Like the rest of the show, these words are too unnerving to be superficial.

Caché is more than a glossy critique of gentrification. The artists lament the loss of intimacy and belonging, too. The grass will always be fake, the altar crafted with white tiles and IKEA candles always sterile. These mass-produced objects are fed to us as craft, just like so many of our ideas of beauty. With this sobering realization comes another: whether we’re the fictional townhome-dweller or a very real visitor to the show, we are anything but unique, yet still very lonely.

Caché runs until April 27 at Gallery4Culture. Photos courtesy of the artists.