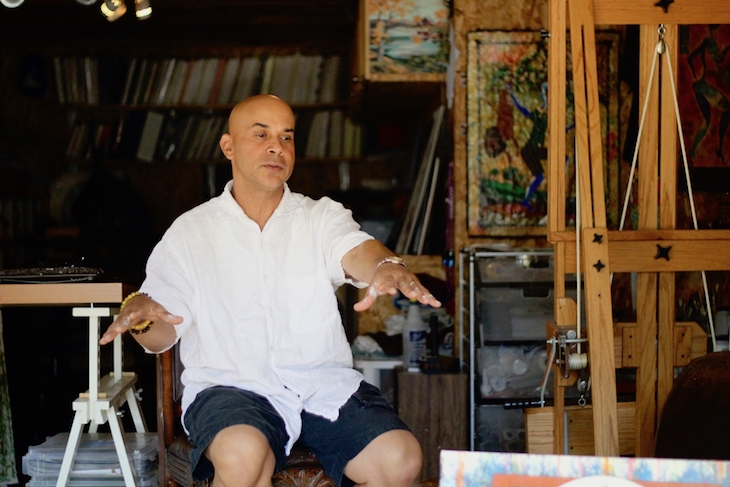 Lawrence Pitre in his studio. Photo by Margo Vansynghel

It was a summer in the 1970s, and Lawrence Pitre was ready to give up. After a lifetime of feeling picked on—first as a kid from the Central District bussed into the predominantly white Eckstein Middle School, later as one of the few men of color in his art classes at the University of Washington. He decided he’d take one more class.

“This guy walks in, introduces himself and says: ‘My name is Jacob Lawrence,'” Pitre says. “My first and only African American art teacher.” Jacob Lawrence, back then already a famous artist, was one year away from retirement. “It really resonated with me that there was someone who’d dedicated his life to art who was giving back,” Pitre says of his decision to not just finish the class but his whole year, graduating with a BFA that year. “He told me: Look, whatever you do, don’t stop painting. Don’t stop drawing.”

In the army, with which he deployed to Iraq three times, Pitre tried to honor this promise. He’d start a painting while at home, then finish it when he returned from a deployment months or even years later. At 53, he went back to art school to get his master’s and graduated last year from Seattle University. His thesis project, a narrative painting series titled about the history of Seattle’s Central District has spun off into a project he’s still working on. This Thursday, the series, We Are One, goes on view at Gallery 4Culture.

“The goal was to do 36 panels, like Jacob Lawrence’s Migration Series” he says when he greets me in his studio, a garage next to his house in SeaTac. The rolled-up door lets a breeze flow through the space filled with paintings, carrying the notes of jazz on KNKX back out. He pulls out a recent work, of Earl’s Barber Shop. The trippy purple-blue background he created by slashing and throwing paint creates a slightly destabilizing effect à la Escher, one of his visual heroes. The flattened style of the three figures in the front, painted in slick acrylic, are reminiscent of Lawrence’s “dynamic cubism.”

How did the Migration Series inspire you?
I knew the Central Area had been going through a lot of urban renewal. I went to see the Migration Series at the Seattle Art Museum and thought, I could do a series capturing urban life, showing the historical legacy of the Central Area. I started back at the beginning with Chief Seattle and work my way chronologically all the way to today.

What was your process like?
When you think chronologically, and you go back to the beginning of Seattle’s history, the Central Area is downtown, after which it works its way up the hill. I included every ethnic group that had ever been part of the Central Area, starting with the Native Americans, working my way through the Dennys, Filipinos, Chinese coal miners. I just told the story all the way through, chronologically, all the way until it ended with my mom and dad.

Did you do historical research?
Yes, I work with the historical society of the Central Area, and I also work with MOHAI. I ask people for photos. But I also just go out and knock on doors and ask how people are doing, ask if they want to pose for a photo or have one. Most people are like, OK!

What were some of the themes that came up while working on this series?
One of the things that I really wanted to touch was the diversity within communities as a whole. Without diversity in communities, it loses a flavor. Within the Central Area, that flavor itself was being lost. I look at it like a gumbo—my father’s from Louisiana—it always has a variety of things to it. So what I wanted to do was to capture that essence of a gumbo, of how important it is to not just have chicken, gumbo also needs sausage and [other ingredients].

Community.
I recently moved back to my parents’ old house to care for them, in the neighborhood where I grew up near Frink Park. Nobody I grew up with is still there. The neighbors are… I don’t know what word to use. They don’t even cut their own grass. They don’t come out. They don’t socialize. I mean, people don’t converse anymore. I ride the train and everyone’s on their phone. God forbid I say hi to someone. Like, excuse me?

Despite all of this, you still chose the title We Are One. Why?
Because I think we’re interconnected whether we want to agree or not. We’ve just allowed wedges to create separations. We’ve allowed it to get in there, bought into it. But I don’t buy into it. I go back to Martin Luther King: It’s about the content of the character. That’s what We Are One is all about. It’s the character of people.

With your series, are you latching on to the things that still connect us?
Yes. I am trying to figure out a way, not only for me but for other people, to latch on. To hang on just long enough so that whoever’s behind me can understand that we can do this better. To go forward.