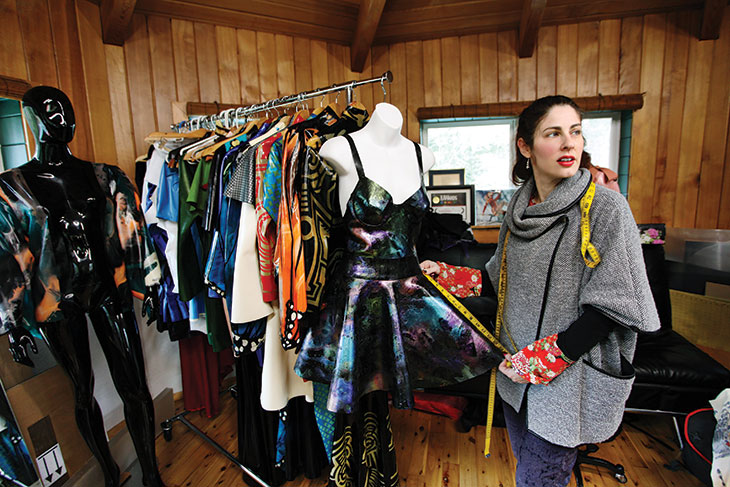 Mostow in the studio with one of her best-selling designs, the Skater Dress, with custom-colored marble latex sheeting made to order. Photo by Kelly O

“For years latex clothing was the domain of fetish wear—underground,” says designer Dawn Mostow. “But more and more, in recent years we’ve seen pop stars and superhero movies using latex clothing to bring this sense of fantasy and performance and unreality into our world. You’ll find it at Forever 21 or Topshop. Lady Gaga wore latex to meet the Queen of England!”

Mostow climbs a wooden staircase into her nest-like loft studio in a ranch house outside Orting, Wash. Surrounded by Christmas tree farms and raspberry fields, with a snow-capped Mt. Rainier towering in the near distance, the ranch sprawls across a bucolic meadow far from any beaten path, let alone the fast-paced world of couture fashion.

In her studio, sandwiched between a drafting table, shelves full of books on design and Japanese culture and an overstuffed leather couch, is a clothes rack hung with gossamer rubber gowns—translucent, covered in graphic pattern, dappled with color like a Jackson Pollock. A slick red moto jacket on a dress form shines like a lollipop. On another dress form, a dusty rose-colored trench coat, cut from semi-transparent latex, falls in soft folds.

This is anything but the cliché stuff of kink. The current Dawnamatrix catalogue line offers more than 300 items—anything from unisex raincoats to dresses, leggings, catsuits, gloves and other accessories. Mostow’s Labyrinth Gown, co-designed with husband Ben Gould (a toy designer who helps realize Mostow’s complex geometric designs via digital vector patterns) won the Wearable Technology Award at the 2017 annual World of WearableArt (WOW) Awards, a prestigious, international design competition. The prize-winning garment was exhibited last fall at WOW 2017 in Wellington, New Zealand, and has since been entered into the permanent collection at The National World of WearableArt Museum in Nelson, New Zealand.

Mostow’s passion for her textile of choice is contagious. “It acts like no other material, it’s so vibrant,” she says as she polishes the sleeve of one piece with the silicone spray formula that lends latex its sheen. “The seams are so sharp. It has these form-fitting qualities that are just so different. On camera it looks fantastic. In person it looks fantastic.”

Since the 1960s clothing made from plastics and rubber has entered mainstream fashion, as well as gained fandom in the fetish community. Latex rubber is both found in nature (extracted from trees and other plants) and made synthetically in labs. Latex material for fabric is made by pouring sheets of liquid polymer formula into molds.

Before the advent of online commerce, latex suitable for clothing was only made in bulk, with little variety of color, pattern and gauge. In recent decades small businesses have cropped up, pouring bespoke latex by hand and creating unique patterns made to order (Mostow prefers an English company, Yummy Gummy). Once latex fabric has been created, designers like Mostow laser-cut pattern pieces, which are then bonded using vulcanizing rubber cement or a similar glue. No sewing involved.

“I love pushing the material in a new direction,” Mostow says. “It’s inherently so light, the lines so super clean. I guess harkening back to my time in computer animation, I would say it’s a living graphic design, like living anime. In a way it’s like bringing animation and graphics into reality, and that’s why it’s so stunning—especially when encountered in the midst of nature like this, this new technology surrounded by something so organic.”

Mostow began making clothes 20 years ago while studying for a degree in computer animation. Long hours in front of a screen made her miss hands-on art-making, so she began teaching herself to construct clothing in her spare time, making costumes for comic conventions or club nights. After graduating, she—a Japanophile with a penchant for anime, cosplay and traditional Japanese art—moved to rural Japan where she taught English for three years and studied Japanese fashion. Afterward she moved to NYC to earn her Masters of Fine Art from Pratt Institute, with a concentration in new materials like plastics. There she made her first collection of rubber kimonos and honed her techniques while designing costumes for the Metropolitan Opera.

Currently Mostow is working toward a degree in visual and environmental studies at Harvard, finishing her thesis on fetish fashion in the mainstream and its history.

“I’m always inspired by my environment,” she says. “In Japan you can see that influence in the kimonos; while living on the East Coast the influence was more industrial. Out here there’s a lot of inspiration from nature: the butterflies, a bright earth tone palette of blues and greens, and also this fast-moving technology sector in Seattle. I’m interested in placing this technology-influenced fashion in nature or combining nature-influenced designs in luxury settings, preferably showing the garments in galleries and museums and performance halls. Giving the garments a place to be is as important as creating them.”

Mostow’s creations have found their way to all sorts of places, from runway to museum to the screen. Katy Perry is one of her favorite celebrity clients; in addition to making custom pieces for Perry, she designed and constructed the two dresses worn in a 2016 CoverGirl Plumpify mascara commercial that featured Perry. In the commercial, one gown, made from 25 yards of featherweight, inky black latex, is pumped full of air that expands to bursting point, like a giant balloon.

Mostow’s collection of waterproof raincoats is specifically a nod to her clientele in the Northwest. “I wanted to introduce the material to Seattle,” she says. “I wanted to give people something that, when they wear it out on a rainy day, no one’s going to bat an eyelash. I mean, they will, but…”

Since moving to the Northwest three years ago, Mostow’s creations have been shown at Vancouver fashion week, Seattle fashion week and in the World of WearableArt™ exhibit at MoPop. Upcoming presentations include the Cars & Couture Show at America’s Car Museum in Tacoma in July and possibly an exhibit at a local university this month if she can handle the workload. Though she and her handful of assistants produce between 30 and 50 commissioned latex pieces each month, at the moment Mostow has to turn down many of the invitations and opportunities she receives.

“I do wear latex,” she says with a glint of mischief. “To fashion events, gallery openings. I like to be seen and I like what it does to the figure. You’ll turn heads in these clothes when you walk in a room.”