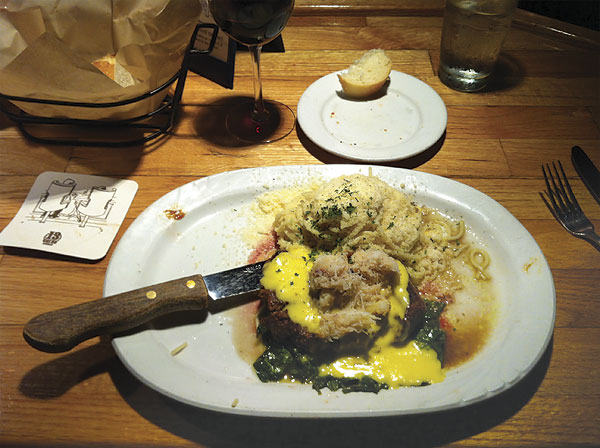 As South Lake Union springs from the tech-money ether, 13 Coins hunkers in the shadows like a defender of history. The 45-year-old upscale diner relishes in its outdated extravagance, appealing to people across the usual boundaries of class and culture.

At midnight on an October Saturday, the wait for a table was at least 30 minutes long. Every tall, tufted leather booth was full, every high-backed chair occupied, each bathed in soft golden light that seemed to pour in directly from the 1970s—sexy, mysterious, decadent.

These relics are rare in Seattle, where the new so often washes away the past like rain. At 13 Coins, the walls—lined in deep, caramel wood—summon images of newspapermen walking over from The Seattle Times offices next door, musicians looking for a late-night meal after a gig, mafioso meetings.

From our seats at the counter, my companion and I watched people come and go, wondering where they’d been and where they were going. Young folks dressed in suits, sunglasses and fedoras. Middle-aged couples toting Wicked programs. Black and white duos on dates. A two-piece band covered torch songs in the bar, warbling a little something for everyone—Beatles, Eurythmics, Journey. Fresh-faced young waiters wore bow ties.

Our meal started with bread and a kind of antipasto—a few carrots, peppers and cherry tomatoes served on an oblong stainless steel tray. A pair of bland crab cakes followed.

One does not come to 13 Coins for the food. One comes for the abundant atmosphere, to foray into a nostalgic other world. Here, health concerns and gustatory ideals have been reverted to roughly 1967, the year 13 Coins first opened. Like others of its era, the restaurant’s menu heralds bombastic dishes like Australian Coldwater Rock Lobster alongside quainter options like liver and onions. It offers breakfast (featuring 13 omelets), lunch (including a steak salad for $29.99) and dinner (six different steaks amid an abundance of other gut bombs) 24 hours a day, 365 days a year.

My buttermilk chicken salad was an utter misfire, the plate decorated with sad dollops of generic BBQ sauce and scattered with chicken fingers. But my companion’s Steak David was an experience of another order entirely: a filet mignon lolling on bed of spinach, covered in crabmeat, dripping in hollandaise, with a significant heap of spaghetti on the side. Its excess flashed subconscious images of cardiac arrest and had to be washed down with a dry martini and followed by a cheesecake knockout punch. The meal was a caloric force to be reckoned with, an aging ad man taunting his grandson with a dare: Eat this.