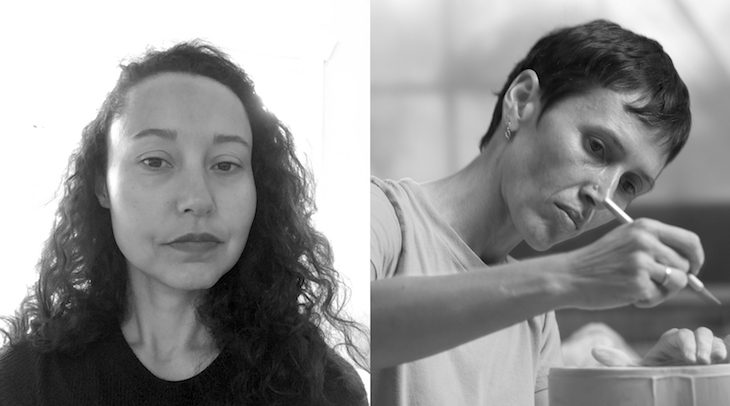 Cornish College of the Arts has awarded its 2018 Neddy Artist Awards to Seattle-based artists Lakshmi Muirhead and Timea Tihanyi for painting and open media, respectively. The annual award, the longest-running and among the largest awards for visual arts in Washington state, comes with an unrestricted $25,000 purse for the winner in each category.

Muirhead layers her panels and canvasses with plaster, adhesives, scraping, oil stick, washed-out blotches of acrylic and ink and rubbed-out fragments of text in a cathartic, stream-of-consciousness process that negotiates the subtleties of self-exploration—specifically her evolving experience of being a mixed-race woman from the Midwest. Though she’s been working on her practice for nearly a decade, Muirhead has exhibited only a handful of times, including a show called Nobody with Mariane Ibrahim in 2013.

“I did feel, and still feel, sort of like a nobody in this art scene,” Muirhead says. “Winning the Neddy is very validating. I paint alone, I work alone. To get this recognition values this whole experience, suggests you’re making something that resonates with other people.”

Tihanyi is perhaps better known, both as a multimedia artist represented by Linda Hodges Gallery and as a senior lecturer at the University of Washington’s School of Art + Art History + Design. After receiving a doctor of medicine degree in her native Hungary, she moved to the U.S. to do research in neuropsychology, but eventually studied ceramics under the late Akio Takamori at UW.

She also founded Slip Rabbit, a Seattle-based, discipline-defying, digital ceramics research and teaching studio. Currently, she makes 3D-printed ceramic vessels and sculptures that include concrete and sensuous blown glass. The crochet-like skins of her ceramic vessels feel like a new type of braille to help read the world anew. “Through the process of 3D printing with clay, I’m exploring the connection between math, logical thinking and algorithms used in 3D printing and the more sensorial, tactile aspect of making and experiencing the world,” Tihanyi says. “It’s a way of negotiating both cognitive and embodied experience.”

This year’s winners were selected by a national juror, writer and curator Rochelle Steiner, who recently joined the Vancouver Art Gallery as associate director and chief curator. She came to the job with an impressive bicoastal resumé that includes postings at the Roski School of Art and Design in California, Public Art Fund in New York and Serpentine Gallery in London.

“The paintings of Lakshmi Muirhead demonstrate her intensely personal and collectively relevant exploration of identity—and specifically how we do, and do not, fit into society,” Steiner said in a statement. “The hybrid, three-dimensional forms by Timea Tihanyi are reflective of her explorations into the fields of ceramics, glasswork and sculpture, while pushing the boundaries of each.”

The $25,000 prize money comes with no strings attached; artists are encouraged to use it as they see fit. A notable example is Matthew Offenbacher, the 2013 winner for painting who, with his partner, purchased seven works of art by queer and/or female artists and donated them to Seattle Art Museum. Last year’s winner in the painting category, Christopher Paul Jordan, channeled $10,000 dollars of his prize toward a Trinidad and Tobago version of #COLORED, an immersive multi-day event and exhibit that showcased black visual artists and poets in Tacoma.

Other previous winners of the prize, which has been awarded since 1996 by the Behnke Foundation in memory of Robert E. (Ned) Behnke (1948­–1989), include Che Sehyun, Clyde Petersen, Matt Browning, Susanna Bluhm and Maikoiyo Alley-Barnes.

“To win a substantial amount of money allows for heating my studio,” Muirhead says, “and other things that are much more inspiring and pleasurable, such as travel or study.”

Tihanyi says she’s still processing the fact that she won the award, but she’s planning on “finding uses for it where it would be at the benefit of a lot of people. It could help Slip Rabbit keep up with equipment needs, sponsor more outreach, residencies and internships, and would also allow me to collaborate on those complex and technically involved ideas for which I need expertise in certain disciplines.”

The work of all the finalists will be on view during an exhibition at the Cornish Playhouse Gallery from Nov. 14 to Dec. 16.