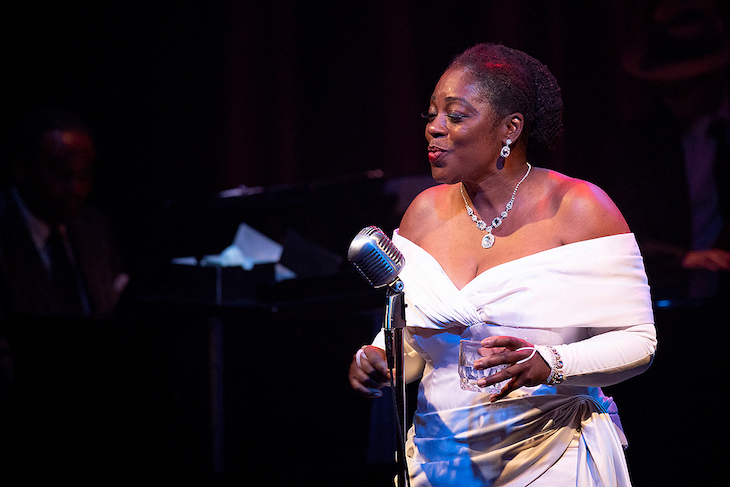 When Billie Holiday died in 1959, she was 44 years old, broke and handcuffed to her hospital bed because she’d been arrested on narcotics charges. Her cause of death was liver cirrhosis. Like so many artists, Holiday’s tragic premature death, precipitated by a tragic life, has played into her mythic status in American culture (and our truly messed-up tendency to venerate an artist’s suffering without rewarding it, but we’ll get to that later.)

Lady Day at Emerson’s Bar & Grill, an essentially one-woman show set in a Philadelphia club a few months before Holiday’s death, grounds that mythology by bringing us a Billie bubbling with rage, buoyed by music, funny, furious and fragile all at once.

“I used to tell people when I die, I don’t care if I go to heaven or hell, as long as it ain’t in Philly,” cracks Holiday, played by Felicia Loud, swishing one white-satin-clad hand through the air at us, her audience. Loud is marvelous in the title role, never caricaturing Holiday’s voice but creasing her own in Holiday’s clean emotive style, dipping into her anger, her loose musicality, her acerbic self-preservation.

But comparing Loud with Holiday at all is disingenuous: I never saw Holiday perform, and neither, I’d wager, did anyone reading this. Videos of her are scarce. Her autobiography, Lady Sings the Blues, forms the basis of this show by Lanie Robertson, which premiered off-Broadway in 1986 and enjoyed a successful Broadway production in 2014, thanks in large part to the star wattage of Audra McDonald in the title role.

Valerie Curtis-Newton directs Lady Day, now running at ArtsWest in repertory with Hedwig and the Angry Inch, and she has gingerly wrung every ounce of authenticity out of Robertson’s somewhat formulaic script. On the spare stage, with just a microphone, piano and upright bass, Billie hops from number to number—“I Wonder Where Our Love Has Gone,” “What a Little Moonlight Can Do”—passing on her way through stories from her life. Her mother, the Duchess. Her days working at a brothel with a Victrola where she could listen to her musical idols, Bessie Smith and Louis Armstrong. The racism hurled her way traveling through the south with Artie Shaw’s band. Her first husband. Her slip into heroin. “God Bless the Child.” “Strange Fruit.”

Carefully supported by her accompanist Jimmy Powers (Darrius Willrich, a stellar musician and green actor), Holiday wends her way through some 15-plus numbers (or partial numbers), Jimmy prodding her along, keeping her on track. Her constantly full drink and, later, her brief departure from the stage, only to return with one long glove suspiciously removed, don’t bode well.

Holiday’s life story is tragic and enthralling, but Lady Day, as written, isn’t very interesting, largely because a character expounding her own life story A to Z is kind of bizarre. The end result is more concert meets character study, a lazy amalgamation that circumvents the need to write an actual script. Thanks to Loud and Curtis-Newton, there’s life pulsing behind these fractured, artificially strung together vignettes, and despite its clunkiness, Lady Day insists that the real lived life of this American icon not be forgotten.

Ask an American to name our country’s unique contributions to world culture, and I’d bet big on them answering “jazz.” Hearing Holiday tell her own story made me think of Frank Boyd’s The Holler Sessions, a fervent theatrical paean to jazz that points out that the people who were creating what was then our country’s most popular art form, minting money for those around them, often died young and in poverty if they were Black. That exploitative system still exists, further wrapped up in our veneration of suffering artists—sure, they were brutalized by our country but they made such great art. Keeping some of Holiday’s story alive alongside her beloved music resists the retroactive legitimization of her suffering. It honors her creative genius while indicting the system that broke her.