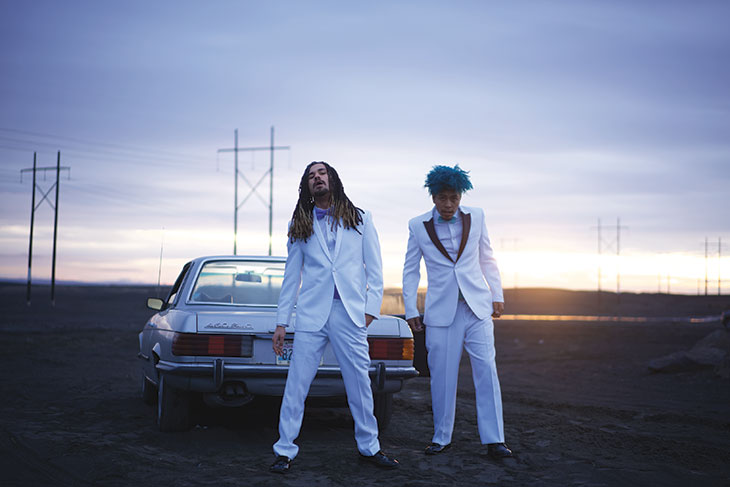 Working with a parade of talented producers throughout their eight-year run, Kung Foo Grip has proven their ability to adapt to changing environments without losing their footing. The title of 2016’s Concrete Waves perfectly describes the Seattle rap duo’s consistent output of hard-bodied rhymes over a procession of diverse musical high points. For their latest full-length, 2KFG, they brought occasional collaborator Keyboard Kid deeper into the fold. Given the prolificacy and quality of material from both camps, the move is logical—and potentially electrifying.

The album arrives at a time when young heat-seekers have more or less moved on from purist trad-rap techniques, but Kung Foo Grip’s loose playing style allows them to slide into the mumble-trap era relatively unscathed. Straddling waves of micro-trends, MCs Greg Cypher and Eff Is H incorporate the best elements of old- and new-school flow, asserting dominance in ways that counter current touchstones—“I ain’t never had to drop no Xans/Tapes out the van, ho/I’m your pusher man,” Cypher spits on “Mic Check”—while embracing the emotional vulnerability of the current generation. “Even when we both agree, we don’t agree enough/I be feelin’ some type of way, then I change it up,” goes the hook on “Mood Swing.”

Keyboard Kid’s beats are bass-heavy and braced with digitized melodies, sample-light and subtly referential to classic West Coast minimalism and dissociative cloud rap, a sub-genre he helped pioneer with #based icon Lil B. The production on 2KFG shows that Keyboard can bring the hammer but also use a painter’s touch to add flair best appreciated in headphones. The core duo is no stranger to project-length collaborations with notable outside producers. Concrete Waves was a partnership with New York/Seattle producer SCLY (formerly Def Dee) and their 2012 EP, Indigo Children Tales From The Otha Side, was produced entirely by local beat tech Giorgio Momurda. Keyboard puts the biggest stamp on the group, most emphatically on songs like the liberating “I Quit,” and the three-song run of “Mood Swing,” “BMZ” and “World’s Cruel Enough,” the latter trifecta setting the bar for best local rap songs of the young year.

2KFG hits snags when the risk level is low. The straightforward piano lick on “Headline” is hard to pull off in a post-“HUMBLE.” world. Lyrically, when the subject matter runs too worn, like the rap-grind detailing “Mic Check,” the resulting track just doesn’t stick to the ribs. But when they go weirder (“World’s Cruel Enough”) or harder (“Risin,” “BMZ”) than their peers, they stand out like they’re supposed to, because weirder and harder is what they do best.