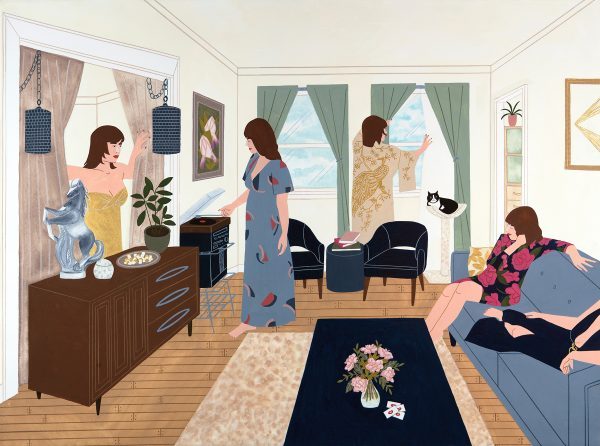 For their new live podcast, Ashok and Hari Kondabolu are going “from city to city, delighting audiences with insights on important cultural matters such as ‘soap’ and ‘handshakes.’” Self-deprecating marketing copy aside, these two are both funny, insightful, creative weirdos in very different ways, and whatever they decide to discuss will be worth hearing. —Gemma Wilson
Theatre Off Jackson

Danai Gurira, Tony-nominated playwright and star of Black Panther, is as fierce as a writer as she is an actor. In her play Familiar the Chinyaramwira family prepares for a winter wedding in Minnesota, and everything is chill until the bride insists on a traditional Zimbabwean wedding custom. Produced in association with the Guthrie Theater, Familiar officially opens this week and runs through May 27. —Gemma Wilson
Seattle Repertory Theatre

For the latest marvel in her 35-plus-year career in music, film and activism, Angelique Kidjo reimagines the Talking Heads album Remain In Light as an Afrofuturist statement. A brilliant, complex maneuver by a worldly, savvy performer, the album arrives in June but tonight Kidjo brings the music—and a phenomenal, enormous band replete with horns, percussion and electronics—to Seattle audiences a month early. —Jonathan Zwickel
Benaroya Hall

On the Not To Be Missed List: Kelly Bjork’s selection of her iconic, super-personal portraits at ZINC Contemporary, Tim Cross with lush paintings at Linda Hodges, and finally, Mount Analogue, Vignettes and Gramma’s teamup on the city-wide, Situationist-caliber exhibition A LONE. They’re planting Easter-egg text and image-based art pieces across town all month, including public video and audio installations, billboards and readings. Reception at Mount Analogue during Art Walk. —Amanda Manitach
Various locations

Mark Lanegan’s worn-by-the-elements baritone has been one of this region’s great sonic treasures ever since he fronted the late, great Screaming Trees back in the day. For the last 20-odd years, he’s deployed that exquisitely ragged troubadour’s instrument in the service of atmospheric, poetic Gothic blues. No one does ravishing darkness better —Tony Kay
Neptune Theatre

We had such a blast at last month’s Art Walk Awards in Pioneer Square that we decided to keep the vibe going (minus the awards). We’re throwing an after party at Dynasty Room, one of Seattle’s most buzzed-about craft cocktail joints. It’ll be a cash bar with Dynasty’s signature tea-infused cocktails and decor by the inimitable Electric Coffin. Dance jams provided by City Arts’ resident DJs Jonathan Zwickel and Dan Paulus. This is a City Arts members-only event! Become a City Arts member for a minimum of $10 to get on the list. Worth it. —Amanda Manitach
Dynasty Room

The Emerald is the South End’s only indispensable, hyperlocal media outlet, and they happen to throw really good parties. This one includes performances by Nikkita Oliver, Julie-C and Rell Be Free, plus DJ sets by Gabriel Teodros and Paul “Custom Cuts” Hinton. —Brett Hamil
The Royal Room

Documentary filmmaker legends the Maysles Brothers were some of the first non-fiction filmmakers whose work was on par with the finest fiction-narrative auteurs. This 1969 chronicle of a door-to-door bible salesman isn’t only an engaging character study, it’s also a fascinating glimpse into a less-cynical America on the cusp of spiraling socio-political unrest. —Tony Kay
Northwest Film Forum

With members of Stickers, Haunted Horses and Male/Female banding together in a sonic alliance, Dragon is the local supergroup to beat. Throw in the most relentless drummer you’ve seen since Bad Future split up and you don’t even need to lace up your skates to circle the pit. “Dragon energy” for real. —Dan Paulus
Southgate Roller Rink