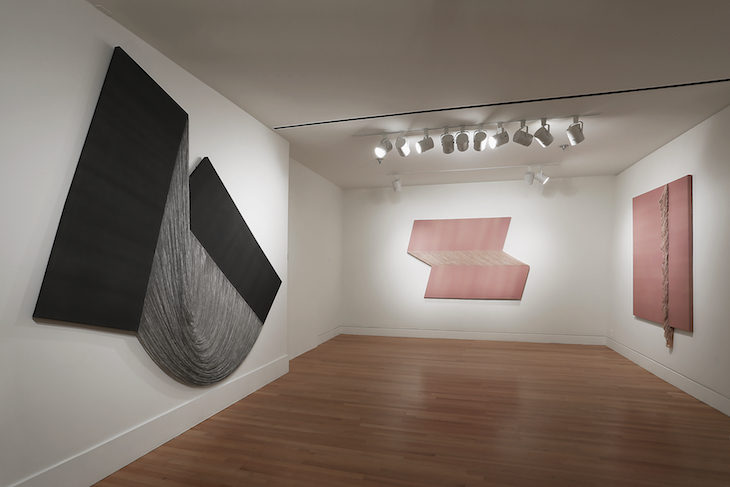 “What you see is what you see,” abstract artist Frank Stella proclaimed in 1964, indicating that whoever stood in front of his minimalist, non-representational paintings should be able to take them all in, unobstructed by narrative or sentiment.

Facing a large, millennial-pink painting by Ko Kirk Yamahira in the Frye Art Museum, what I see is this: two pink canvas parallelograms reaching out towards the gallery corners, bound to earth and to each other by strands of fiber stretched between them. My body nearly pressed to the painting, I see the bas-relief of the threads that used to be part of the canvas before Yamahira painstakingly unraveled them. From further away, I see a different form: a three-dimensional bench.

And yet what I see is not merely what I see: It’s impossible to not also visualize Stella’s similarly odd-shaped paintings, with their semi-circles, triangles and double-Vs, probing beyond the edges of the traditional rectangular canvas.

In his first solo museum exhibition, Yamahira builds beautifully on this minimalist-modernist legacy with deadpan reverence and delicate sensuality. The show, on view through June 3 at the Frye Art Museum, is named after him, although his is not yet a household name. Born in LA and raised in Tokyo and London, the young, self-taught artist moved to Seattle from New York less than three years ago.

Yamahira’s artistic CV is rather brief, but when curator Amanda Donnan stumbled upon his work, she was astounded by its elegance. Donnan figured a solo show would reveal the wide cache of work Yamahira had been laboring over for years. But Yamahira saw the opportunity differently, and tailored a whole new series of work to fit the gallery.

Yamahira’s intimate knowledge of the space is evident from the moment you walk through the hallway to the exhibition hall. Four fuzzy window frames, made from the wooden support cross canvases are often stretched on, hang in as many brightly lit niches, each trailed by a four-paneled shadow on the wall.

It’s impossible to tell now, but before taking apart the canvases, Yamahira spray-gunned them in different colors: cyan, magenta, yellow and key (black)—the four colors of the CYMK color model used in printing via a subtractive process whereby each additional color removes light as it adds ink.

Yamahira’s process is one of subtraction as well. He “unwove” the painted canvases until only their threads remained, which he mixed together and then glued back onto the wooden skeletons of the frames they once belonged to. The sum of its parts is not more color or more shape, it’s less. We can only guess as to what was there before. By remaking the paintings into literal windows, Yamahira undoes the assumption that a painting constitutes a window into the world, let alone a soul. The artist gives little clue to what it is instead.

“There is no specific aim to find a meaning,” he writes about his practice on his website. “Neither in the creative act itself, nor through the creative process.” The meaning, he says, is found in the continuation of his process of undoing, which is why all his pieces remain untitled. They’re not so much standalone artworks as manifestations of his life’s work of unthreading the canvas, a Sisyphean undoing of painting.

It is, as this show demonstrates, an alluring endeavor. In some cases, such as in the show’s pièce de resistance, a large rectangular wooden frame holding a series of dangling threads in a ship-hull-shaped semi-cylinder, it is also a sensuous one. Sitting on the ground near a mirror that reflects the work, I watched its soft belly undulate with the wind of passing visitors and their hushed conversations. Noticing the smallest ripples, I found beauty in how its susceptibility rewarded mine.

Still, I wondered if it was enough. Outside of the museum walls, the world is messier than ever. Why make minimalist art in 2018? Had it not all been done before? The answer is yes, but only by a specific subset of artists, who, like Stella, were mostly white, male and in some cases Ivy League educated. In painterly abstraction, as in other fields, only now are female artists and artists of color getting their due.

A new generation of artists historically shut out from the modernist microcosm are now redefining abstraction. Some, such as Mark Bradford, who recently represented the United States at the Venice Biennial with his exposed layers of salvaged paper, shellac and string, don’t think what you see has to be about what you see. Bradford says abstraction can be a social endeavor. As a self-described “21st-century African-American artist” he “gets” the politics and the theories of modernist abstraction, but proposes a new way of looking to and through it: “To use the whole social fabric of our society as a point of departure for abstraction reanimates it, dusts it off.”

This could be a relevant framework for Yamahira’s abstraction as well. His work of undoing the fabric of his paintings mirrors our need to deconstruct white supremacy, cis-hetero norms and other biases. Like Yamahira’s, the process of deconstruction is an endeavor of breaking down, dissecting, dismantling, reinterpreting. Maybe the sum of what’s left over from this process is not the wholesome image we thought it would be. That’s okay. It’s about the work, and doing it over and over again. And maybe then, from the bare skeleton, we can start again.