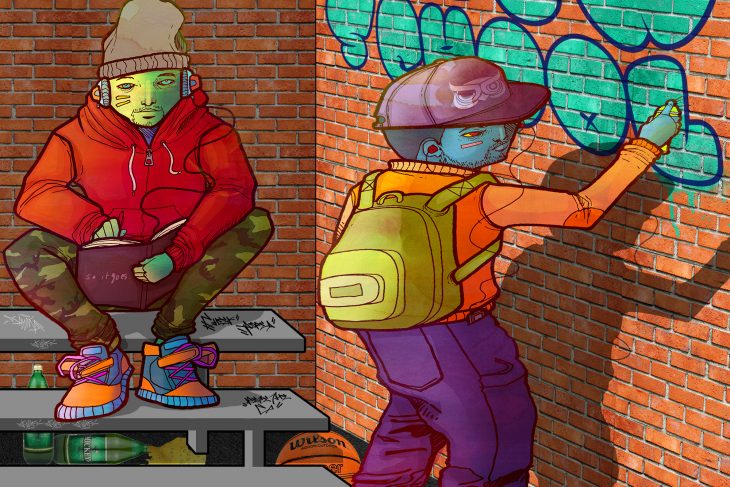 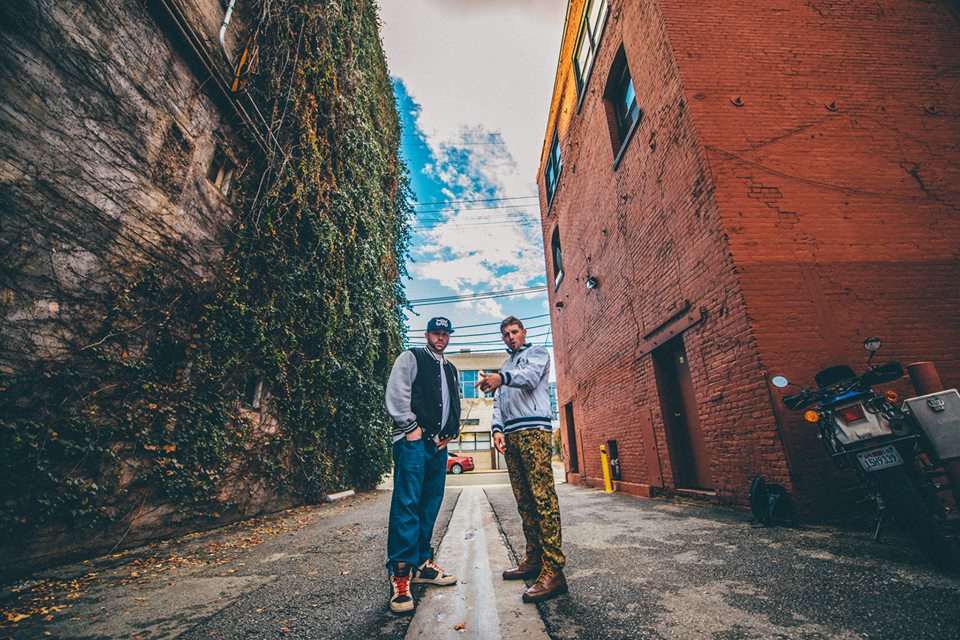 Blending classic ‘90s-era rap with spoken word poetry, Knowmads have spent the last ten years baring their souls in an effort to transform their pain into art. Fierce, virtuosic lyricists, MCs Tom Wilson and Tom Pepe touch on dark themes like depression, suicide and drug addiction, reveling in wisdom and self-improvement as often as weed and women. On their 2012 debut The Knewbook, they swerve from social critique to personal angst: “Society’s demented/I’m looking for a mentor/People disappoint me every day/I thought you meant more,” Pepe raps on the track “Pain”—and you feel their pain. On “The River Runs Deep,” a song streamed more than a million times on YouTube, they tell a gritty tale about a young man at a crossroads: either succumb to addiction or devote his life to “spreading knowledge” through music. He chooses the latter, suggesting that the character is not so far from his creators.

Knowmads released their fifth album, Knew School, earlier this week. We spoke with Pepe and Wilson about musical legacy, modern hip-hop, how they’ve advanced through the years.

City Arts: Do you feel like you’ve taken a step forward with the new album?
Pepe: Definitely. I was listening to [our older] stuff on the airplane yesterday and there was a sense of pain in those records, of immaturity, [of feeling] a little bit unsettled. And then I was listening to the latest record and it’s—

Wilson: More sure of itself.

What changed?
Pepe: Over the past few years we tried to do things musically and in our daily lives that weren’t working for us. We feel like we’re more in control of our lives now but also more in control of our art. Nobody is in our ear except our producer [Peter Lee Johnson], and he’s very thoughtful, very even-keeled. If he likes something, it’s because it strikes him musically. There’s no personality, no ego battles.

Wilson: Which is awesome because he could have an ego if he wanted to.

Pepe: As a result, I think the record feels more mature. Before, there was a striving for ego, ego as a means to fight against depression and pain. This album is just, like, more confident.

Why did you call it Knew School?
Pepe: Because we first found our voice in the hallways of high school. We feel like [the theme] is reflective of the classic Knowmads sound. But also, because people talk now about all the ways hip-hop has changed and gone away from its original roots, and there’s a lot of backlash. People will be like, “These new school rappers are garbage.” So we wanted to show that we’re just as young as some of these other people, but we have a very thorough understanding and respect for the tradition and form. There’s still some hip-hop artists trying to spread knowledge.

How would you describe your sound?
Pepe: I like to think of our music as inspired by golden era hip-hop and our sound as an evolution of that. Our production doesn’t use samples, there’s not a DJ, our music is composed by a violinist and pianist. We’re conscious of how rappers were making stuff in ’94 and ’98 but also how rappers are making stuff right now. Like Drake and Future, but also Nas and Jay-Z. There are elements in our music that remind you of a symphony or something, but then there’s 808s that are on par with what’s happening right now within the music industry. This album is tailored for the music industry. It’s not outside of it.

Wilson: It’s hard to make a record like that and still be true to what you want to create.

CA: How did you reconcile those two things?
Pepe: Well, the production, we were blessed because of Peter Lee Johnson. He makes the most incredible beats. And we refined ourselves. We edited ourselves. This is our thesis. What is the answer to those questions that we’ve been asking all these years? It’s like, you really do need to rely on your real friends. You really do need to keep things in check when people are wasting their time getting high and drinking. And that’s why the record sounds more sure of itself, because we’re more sure of ourselves and our answers to those questions that we’ve been trying to answer for so many years.

Wilson: And we’re having more fun now. We spent a lot of time being sad and shit. [Laughs] I’m just saying.