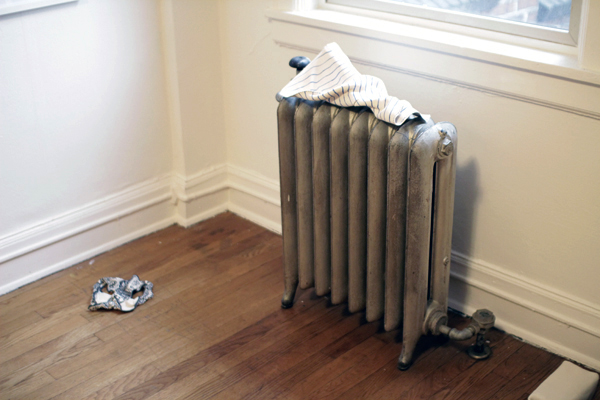 This past Thursday Klara Glosova‘s latest work was the subject of a one-night exhibit at Vignettes. Instead of a prolix statement about the show, the press release states:

How to Hide an Elephant (a cover) / This show is poetry / not prose, / but then again I’m like America – / full of Grand Canyons and contradictions.

When you walked into the room it looked as though there were children’s underwear tossed on the floor. There were powder pink camisoles draped or crumpled here and there, a sock and a towel thrown against the radiator. But it turns out they are all made, meticulously, of ceramic. Not a detail is spared: the garments’ tags are poking out, eyelet trim is perfectly rendered, patterns and prints are painted so evenly you take for granted it’s the real thing. A true feat of trompe l’oeil.

Glosova, who is also known for founding Beacon Hill’s alt-art space NEPO House and the NEPO 5k Don’t Run, moved to America from the Czech Republic when she was twenty. Her work intertwines her personal history of political activism in Eastern Europe with her experience as an artist and mother and (above all) a curiosity and playfulness that extends to both concept and materials. She’s built plaster igloos in the California heat, she’s knitted sweaters for ceramic popsicles, she’s sculpted hyperrealistic-but-melting-looking iPods and iPhones complete with snarled cables and ceramic earbuds. 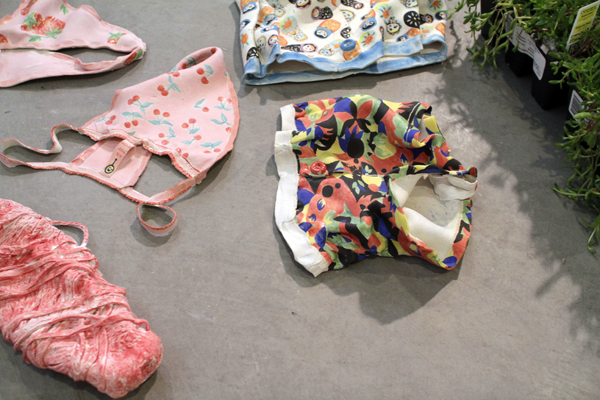 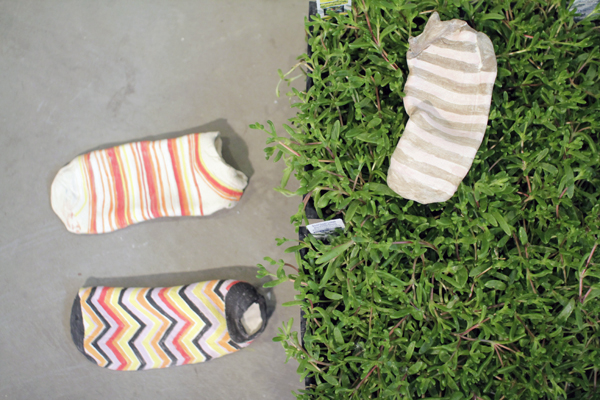 How to Hide an Elephant is a very personal show for Glosova. For many months she’s been compelled to produce these ceramic undergarments and linens, but the fact it requires so much effort to make fragile, easily-crushed simulacra raises some basic questions for her. What’s the point of reproducing these objects? How can they find context as objects, as art, as expenditure of her labor and time?

“We’re all working in an economy that supports virtual productivity,” she says. “As an artist you question whether you’re contributing to any real kind of sustenance, but the more you consider this question, the more you realize we live in a culture where very few people are. It’s not just me. But the work of an artist highlights the issue, since artistic productivity falls outside the typical economic system – it’s often not a money-making effort.”

A scrap — a triangle — of ceramic tucked on a windowsill might serve as a key to reading How to Hide an Elephant. It’s a replica of a page torn from William Blake’s Songs of Innocence and of Experience (“Showing the Two Contrary States of the Human Soul,” it says). Glosova’s scrutiny of virtual production, consumption and expenditure has something to do with darkly nascent sexuality, either in its libidinous insatiability, its innocence or its corruption. 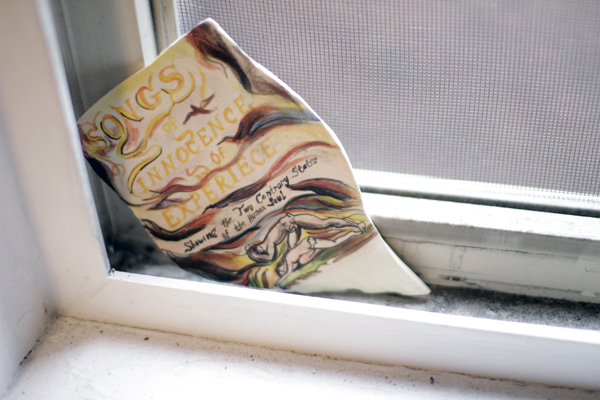 One way she’s been contextualizing the work is to literally place it amongst the bushes. She’s been photographing the ceramic undies on the grass or draped on a shrub: it suggests illicit, young love.

Glosova’s work languishes, in a sense, in a playground of economic decadence, redolent of the cloying futility of empires in decline. Its poetry is contemplative and riddled with Whitmanesque contradictions (which are not just American, but are really universal): frivolity and uselessness are integral to modern economies, for better or for worse. A pile of wadded-up ceramic panties are pathetic as they are sublime in their object-ness, and seem to be saying if the world is caught up in a current of hyperproduction that is ultimately unnecessary, might it be best to turn work into play? Glosova’s work always, in the end, indulges the positivity and pleasure of play. A return to a state of innocence, even if it’s dappled with the bittersweetness of experience, is the prescription.