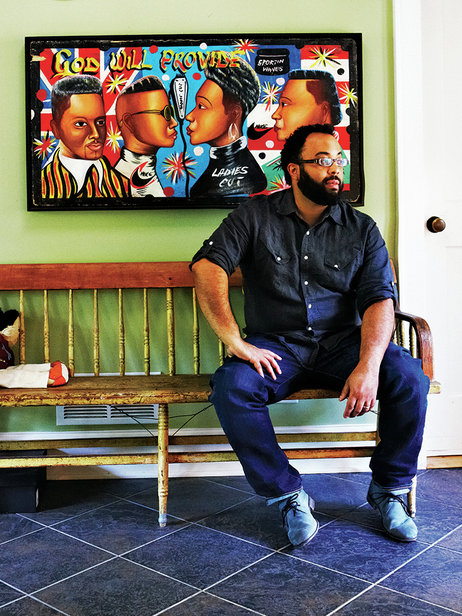 Since his early days in The Dark Room Collective—a community of African American poets that included Thomas Sayers Ellis, Sharan Strange, Major Jackson, and current poet laureate Natasha Tretheway—Kevin Young’s accomplishments are almost too many to name. He’s written seven books of poetry and edited eight others, perhaps most notably Ardency: A Chronicle of the Amistad Rebels, which won the 2012 American Book Award. The book of poems that really put him on the map was Jelly Roll: A Blues, which won the Paterson Poetry Prize. Before he reads at Hugo House on Friday, we called Young up to ask about his new collection, Book of Hours (Knopf 2014), which explores the aftermath of his father’s death, the birth of his son, and the way grief digs its rough paths through us.

You wrote Book of Hours over the course of 10 years. In some ways, the book itself serves as a record of your struggle with writing about death, one of the largest and most well traveled territories in poetry. Which challenge of writing about death surprised you the most? How did you overcome that challenge?
Unfortunately I’d written about it before. This isn’t my first elegy, though I wish it were. But with this book I wanted to recount in everyday language those days and hours and months after my father died, to capture a daybook of grief. Some of it is in the details—little totems I would take from his house, or trying to get his dry cleaning. Those things became filled with meaning, and I was trying to go back to those things and to find the meaning about the aftermath. Ultimately, we all go through different moments of grief, and I hope in some way that writing about my grief will help others with theirs.

What did you learn about the bureaucracy of death?
There’s a poem in the book called “Codicil” where I speak to that: “May God or whoever else / spare you / the arms of bereavement / specialists—”

You use the word “you” to refer to father, to beloved, and to son, which produces an interesting effect of perspective. Do you see a relationship between this collapsing of the “you” and the process of grief?
I think yes and no. I think that the “you” is always the beloved however you think about it, is always this intimate other thing. Towards the end of the book there are many “yous.” There’s the reader, the self, the father who’s gone, the child who’s there now, and then there’s the “you” in the Book of Hours that addresses the self, addresses us, or a self that could be us. So there are a lot of different “yous,” and at the same time there’s this home of a “you.” Grief is a word we all share, but we share it in different ways, and I guess the different “yous” speak to that.

The book is composed mostly of lyric poems that use full sentences broken over couplets or tercets. There’s lots of organized music, too—end rhymes, measured assonance and consonance. What drew you to this form for Book of Hours?
To be honest I noticed it later when I started reading the poems aloud; that there was this undertow of sound, and I think that undertow of sound is both comforting and a little surprising, a little bit just-below-the-surface. Things sometimes rhyme together, sometimes they chime and make sense, and sometimes they don’t.  If the music were more consistent it would be less surprising. In this way I hope the poems capture the dailyness of the music of that time.

For all the doom and gloom, the book is pretty funny! I’m thinking of poems like, “Pity,” “Codicil,” “Bereavement,” and even “Rue.” Can you talk about the role of humor in the book?
I think it’s kind of a blues impulse—laughing to keep from crying. It’s also part of the experience. I thought about taking the humor out, but then I thought it wouldn’t be true to that experience. There are things in grief that strike you as funny—grief isn’t only one way, it’s as much about laughing about the good times you had as anything else.

You’ve got a reading coming up at the Hugo House. What’s your approach to reading poems aloud?
I’ll mostly be reading poems from the book, some new-new poems, and a couple oldies. I don’t think a poem is complete until it is read aloud or read by someone else. The poem needs to have breath put into it. The page is the score, and the reader is the conductor, and the poem is just notes on a page without that conducting. But sometimes I’m the conductor, as when I’m reading, and in this way I can reveal different sides of the poems in person.

Kevin Young is reading at the Hugo House on Friday, April 11, at 7:30 a.m. Photo by Melanie Dunea.