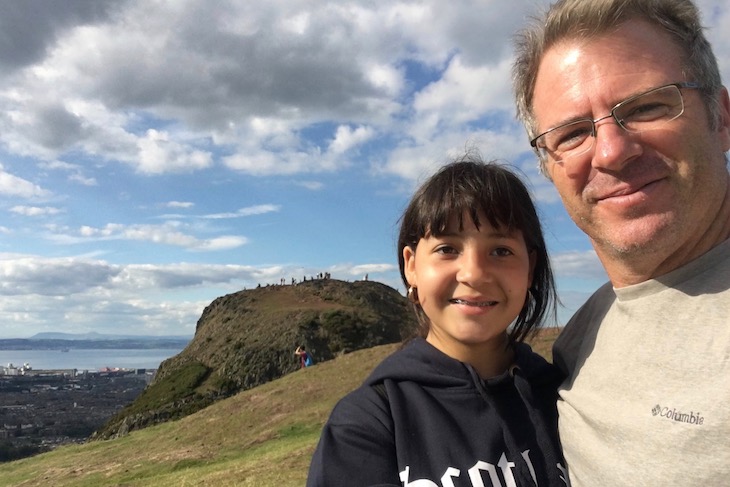 Craft and his daughter in Scotland last year.

My father and I weren’t exactly close. We weren’t distant, either, except on a map. He had retired to Florida, near Tampa Bay. I had long ago moved to Seattle, about as far away as you can get in the continental USA. We didn’t plan to live so far apart from each other. It just worked out that way.

I grew up in New Jersey, in the garden part of the Garden State, first on a flower farm—my dad’s, inherited from his father, who had died there—then in a suburban development bordered by woods and orchards and cornfields. My childhood was full of my father’s affection, also his gruff, tripwire anger. He took his family camping and canoeing, coached my baseball team, and my younger brother’s too. He used to wrestle with us on the living room floor. I can still recall the joy I felt the first time he let us stay up late to watch Sonny & Cher. His friends called him Archie, because he had a bit of the hothead in him, like Archie Bunker. His favorite TV show was Columbo. His favorite writer was Louis L’Amour.

He was a blue-collar union man who worked most of his adult life for the New Jersey Department of Transportation. When it snowed, he’d be out all night plowing the roads, even on Christmas. Once or twice I rode with him in the truck. That’s how I got to know every road in the county. And most of the potholes too.

After I left for college, we maintained a companionable rapport. But we never really did anything together after that. Our relationship became phone calls and infrequent visits, a cat’s cradle of chatter about football scores and family scuttlebutt and the occasional grumbling about politics or indigestion or worse. A lifelong smoker, his health was never great. In this respect at least, he mirrored his country.

On Father’s Day last year he was in a coma, breathing through a respirator. Doctors told us he would never emerge. He had a living will that refused all forms of life support. On June 20, we turned off the respirator. On June 21, the summer solstice, he died of congestive heart failure and complications from chronic emphysema. Between seasons, surrounded by family, he slipped quietly away.

Now I was the father of the family. I had been a parent for many years already, but I suddenly felt that responsibility more acutely. A nerve had been cut. Yet somehow I must help my daughter live well and safely in a world I scarcely recognize—a fatherless world, a dangerous nation, a tech-obsessed culture in which I often feel lost.

A few weeks after my dad’s funeral, we embarked on a month-long road trip in Scotland, my daughter and I. In July she was 11, almost 12. We had planned this trip many months prior, but it came as a godsend to be out of the U.S., away from the news cycle, exploring new landscapes green and austere, floating like a cloud through the mournful sound of bagpipes.

I had last visited Scotland some 30 years before, not long after I first left home. For me that early trip was preserved in some archaic past. My daughter was seeing Scotland fresh and wild. We drove the North Coast 500, one big loop around the perforated perimeter of that gorgeous water-logged country. We stopped at remote, empty beaches, at boggy headlands, at sleepy villages, at thunder-headed lochs and bens.

At every stop, we walked. Walking means taking things at her pace, which happens to be a good fit for an ancient stone country like Scotland. One day in a churchyard we stumbled on a medieval “kill,” or cell, a beehive-shaped stacked-stone chapel just big enough for one monk to sit in. Of course she had to climb inside, and insisted I try it too. As I sat in the cool dappled darkness of that cell, I could feel my skin loosening. For a moment I became the enclosure I sat inside. We walked on from there to spelunk a little in the Neolithic burial cairns of Kilmartin Glen, humming to ourselves in their amplified interiors, wondering at the vanished lives of their previous inhabitants. Walk long enough, the stones begin to sing.

Between walks, we drove long miles, listening to the Hamilton soundtrack many times through, singing every part to each other by heart. In a memorial garden in Durness, we listened to John Lennon singing “In My Life” to every passerby. On a cliff near John o’ Groats, we sat with puffins, silent as they were silent, listening for hours to the crashing sea.

My daughter is an earnest traveler. I’m figuring out how to walk beside her, or not too far behind, to watch her as she watches her own step. At her pace, time abides, though I feel it slipping. In a stone circle or on a sea cliff, I’m like a drop of water, learning how to grieve.