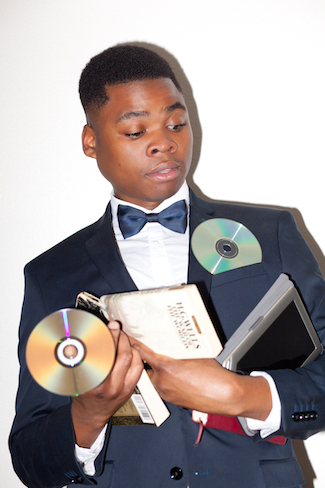 Improv is the most variable form of comedy in the universe. Some of my favorite comedians in the world—such as Lauren Lapkus, Thomas Middleditch and Tawny Newsome—come from the world of improv. Here in Seattle, horror-based improv troupe Blood Squad is good enough to make life worth living. A solid improv show crackles with energy and momentum and creates peals of laughter that border on frightening.

But it can also go the complete opposite direction. Of the absolute worst comedy shows I’ve ever seen in my life—the kind that make me want to disavow the concept of humor altogether and join a monastery—at least half have been improv (the other half is open mics, obviously). If the jokes aren’t landing, you’re really just watching some people on a stage trying unsuccessfully to figure out what’s going on. It’s excruciating.

So it brings me great joy when something comes along that goes beyond the standard audience-suggests-a-restaurant stuff and really milks the pathos out of the format. Cast of One, created and hosted by improv guru Kesan Nathaniel, is all about the pathos. It stands a single performer on stage in front of a crowd and asks him or her to perform—from scratch—an entire movie, book or play for about an hour, with the audience supplying the title based on a given genre. As a comedian, it freaks me out to even type that sentence. But the results can be amazing.

Kesan Nathaniel has been in the improv game since he was a teenager. Originally from Milwaukee—the birthplace of ComedySportz, for which he performs and instructs—he moved to Seattle five years ago to help found the organization’s local chapter and has since become a fixture in the comedy community. I got together with him to talk about the wide range of content Cast of One has produced over its ongoing three-season run at the Atlas Theater in Fremont. This month’s show features multi-media juggernaut Jekeva Phillips.

Tell me about Cast of One.
Cast of One is the art baby I never thought would last. It started because I was booked for a show where I thought I was supposed to do standup, but it turned out they’d booked me to do improv. Like, “Just do some improv bits!” And they put me after a magician, too. This was when I was still feeling the Wisconsin in me. I got nine shots on this tray and I told the crew I was going to reenact a movie. I said, “Hey, what’s the last movie you saw” and a lady said the movie 300. I was like “Alright, I’ll reenact 300, but any time I make a mistake I’ll do a shot.” Yeah, it was dumb.

Sounds pretty awesome, but you can’t replicate that too often.
You can’t, no! I tried, I tried! There was an open spot at the Atlas that we were trying to fill and I offered it to Cast of One to try it out. For each month I’d have it go with a different performer—someone I admire or who was generally well-liked in the Seattle improv community. Not to say that the people I admire aren’t also well-liked and vice versa. But we started doing that and it eventually became its own thing.

For an improviser, it’s great watching other improvisers do the most pure improv, which is what the show is—the most masturbatory thing ever. It’s you performing with your best scene partner, which is yourself, because you have all the right ideas. On the one hand, they enjoy it because it’s your purest self on stage. But on the other hand, it terrifies all of the performers. There’s an envoy list of folks who are like, “Oh, I really want to do it!” “Well, you can do it this month!” “Oh, I really don’t want to!”

How long does the single-performer portion go on?
Forty-five minutes to an hour-plus. The shortest one was 29 minutes. The longest one on the books was one hour, 50-something [minutes]. And it was phenomenal. It was by Graham Tordoff, who did the Abarat series. I’m sorry I cut him off.

For each season there are 12 performances. Having seen all of these performances it’s weird that they don’t all blur together. The first person who broke the mold of what it could be was Chris Allen’s performance of a weird French neorealism film. It was great and it was funny, but that was the first time where it was a tragedy. The protagonist had to choose between the lover that she thought died but had returned, or this new man that she just fell in love with. And in the end, she couldn’t decide and ended her life. The music was swelling and the lights—we don’t usually pride ourselves on our lighting system—everything just melded together into this perfect slice of art because it ended with so many feelings that the audience was leaning in, just trying to see what happens next.

The actual story took hold.
Yeah, and that happens frequently. Another one that was really great, this is someone who’s performed twice, Gregory-award winning Kate Jaeger, who did Mefistofele, the opera. She did it not telling the story, but her telling of the people watching the opera as it’s being played. And then Kate, being Kate, also starts singing the opera and briefly stops to tell about the scene changes and the exposition and what’s happening and you’re watching this and it’s amazing—and she was musically accompanied by Prom Queen. It was so great and watching two awesome folks being ridiculously talented and doing great improv. Which is what you kind of forget: These people are great storytellers and musicians. Then you remember, “Oh, they’re making this up right now.”

A recent one was a performance by Alison Lars—it was her first time doing it and she was super nervous. She asked for an anime and she got Yuri On Ice. It’s an entire anime series about figure skating. It was one of those performances where…I’m gonna make it about me, I was feeling kinda grumpy about performing at the time, but her performance was one of the first ones I’d seen in a while where I’ve seen someone non-ironically happy. It was the most awesome, cinnamon roll-embodiment of improv ever.

There was a performance of Stranger in a Strange World by Matt Hatfield, from Drop the Root Beer and Run. This was possibly the most high-art performance. He did very little scene painting or exposition; it was mostly dialogue. However, there were only two characters who spoke in a recognizable language. The rest was gibberish. And you’re just following this one guy who doesn’t know what’s happening or what people are telling him, but then you eventually realize that he actually knows what he’s saying. You’re watching impromptu gibberish and it’s almost as if there are subtitles and you can get it. It was another one of those performances where people are just watching like this [makes an enrapt face]. But that’s the kind of watching that’s bad for comedy because people don’t go to the bar. You can enjoy art and drink!

You’ve done it yourself a couple times, right?
I like to do mash-ups—I get two different pieces and put them together. I did Rope and Hamlet together. Lots of dying, lots of killing. The last one that I did was Midsummer Night’s Dream mixed with Titus Andronicus. The constant for me in Cast of One is to keep it scary. I’ve seen this monster from so many angles, at so many times, that it’s becoming Shrek to me. It’s not scary. It’s no longer the horror movie that Shrek was, now it’s Shrek 3.

The next edition of Cast of One, starring Jekeva Phillips, is Saturday, June 10 at the Atlas Theater.