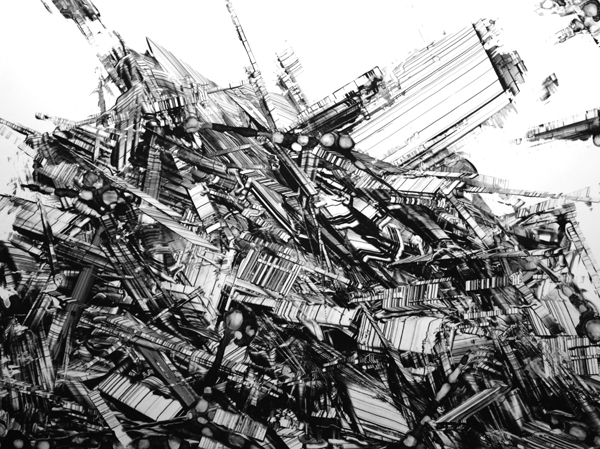 If you talk with Keith Tilford about his work, or about life or anything, it becomes quickly apparent that he’s (I would like here to launch into crass language to describe how very) smart. But without being a jerk about it. One imagines on his bedside table a bottle of Jack and a few volumes of Deleuze & Guattari, Badiou and something on poetics or mathematics, all of which are worn out and well-read.

Tilford, who graduated from Cornish in ’03, hasn’t shown work in six years. His last solo show was with James Harris back in 2006, and since then he’s lain low, collaborating occasionally with artists like Joseph Gray to make dazzling projection-mapped video sculptures, but otherwise retired from showing his personal work publicly. Why show now? Why not, he says.

There are a staggering 32 of Tilford’s paintings hanging at Joe Bar Cafe right now. (Joe Bar, with its crazy green, relatively-cramped walls: about as different from James Harris as you can get.) These new paintings are tightly-composed and lustrous, a departure from the oversize drawings on paper Tilford showed at his last exhibit. Still, Tilford’s predilection and capacity for mark making drive the work, which is ultimately concerned with the manufacture of fractured, illusory images (landscapes, objects, people) comprised of unraveling marks that cluster and dissipate spastically. 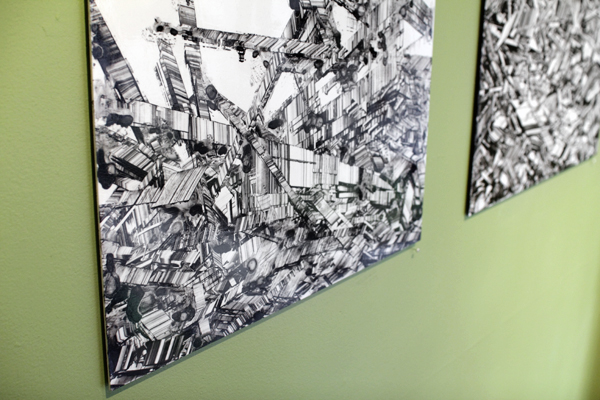 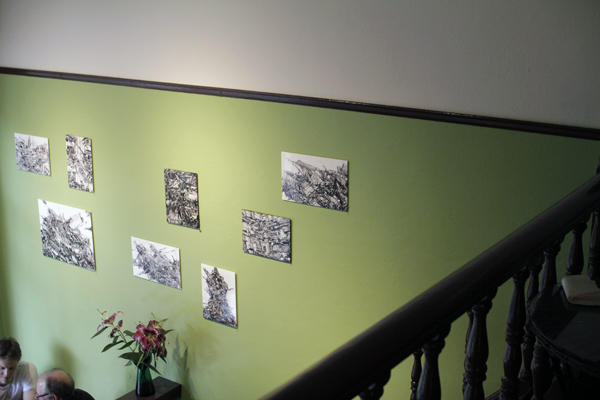 The works — Tilford likes to think of the process as closer to drawing than painting — are acrylic paint on acrylic board. He’s fabricated his own tools, also of acrylic, to drag and spread the medium, which, even when dry, glistens wetly with a hard-candy shine.

The prettiness of the finish is funny considering the violent energy of the marks, the smashed, crystalline planes that jut out explosively or implode in post-apocalyptic snarls. In some paintings it looks like a huge fist had punched into a city block. Which, coincidentally, is what many of the city blocks on Capitol Hill look like right now, as whole neighborhoods are systematically gutted or demolished.

I can’t help but think the architectonic, claustrophobic clutter of Dislocations is akin to that of Piranesi, whose 18th century etchings of imaginary prisons are crammed with stairways, kaleidoscoping vaulted ceilings and monster machinery. Like Piranesi’s non-places, Tilford’s landscapes are imaginary. They invite industrial and technological fantasies. The viewer wants to daydream futures and pasts, imaginary economies and civilizations. Tilford wants the imagery to invite this kind of speculative imagination and comments, with that casual smartness, “contingency has its vengeance in the work.” 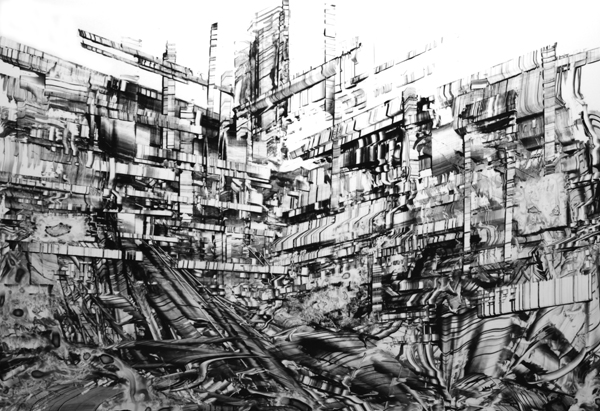