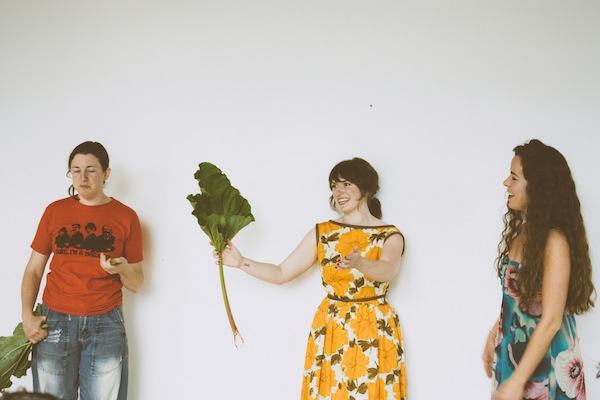 On a bright Father’s Day at the Hedreen Gallery, poet and baker Kate Lebo read to a small crowd from her new zine, “The Pie Lady’s Manifesto.” But there was no pie served. Instead, photographers Natalie Shields and Timothy Rysdyke manned a table covered in strawberries, dipping sugar, champagne and jugs of orange juice. Lebo’s tiny, hand bound, oven-fresh zine was scattered about. On its cover, two illustrated women in full-skirted midcentury dresses open a refrigerator to reveal a naked female torso. A disembodied, perfectly coiffed female head floats above, black X’s over her eyes. The eight chapters inside address such non-saccharine topics as identity crisis, the Cult of Domesticity, sexism and suicide.

“In my experience, a pie lady is someone to go to for comfort…and someone to ogle,” Lebo writes in the zine. “She’s a Warrant girl, Photoshopped fruit and boobs, kitchen kitsch, sugary spice and everything ‘nice.’”

It’s a noteworthy takedown. Lebo, a longtime colleague of Hugo House and recent UW MFA graduate in poetry, found her career rocketing in recent years thanks to the very symbol her zine now seeks to subvert: Pie.

Pie, that warm, nostalgic, relentlessly messy and hopelessly sexy concoction, that when made right can contain both expected delights and pleasures you’d never dream of. Lebo became expert at both making it and documenting those experiences in prose and poetry, and her readers responded voraciously.

“It’s great to have an audience but it’s also exciting to have a powerful subject,” Lebo says after the reading. “For me it became this companion to writing because it created a tangible result that I didn’t resent at all. I used to write poems and resent them for not being better. Pie taught me to accept what I had made with the materials that I had.”

Lebo has talked about pie and poetry on radio and TV, sold the combo at Doe Bay and other festivals, and started a successful Pie School. Now an expanded version of her chapbook, A Commonplace Book of Pie, is due out in September, as is a cerebral cookbook for Sasquatch in 2014. She’s living off her advance for the latter in a cabin in the Washington woods, far from the pie fever her work has generated. Writing “Manifesto” helped clarify her intentions for an unusual cookbook.

Why include deep thoughts in a cookbook? Why sully a cheerful, crafty wonderland-scape with unsettling observations about the complexities of willful femininity (Lebo’s daily wardrobe is the stuff of Mad Men), the choices we make and the ways we react to the things that happen to us, despite our best intentions?

Because some members of the in-the-know group at Hedreen’s artsy reading [part of the larger show “Weird Sisters” with Kate Ryan and Kat Larson] had never heard of the Cult of Domesticity—a midcentury concept that identified the home as a woman’s “proper sphere.” Because neither Rysdyke nor I had any idea that in addition to being a controversial and misunderstood poet, Sylvia Plath was an avid cook and baker, which Lebo’s zine illustrates with snippets of academic criticism and Plath’s work in Ladies’ Home Journal, 1958.

Because national conversations about rape culture are still percolating, and because it’s important for people to share the discoveries they make when working creatively.

Lebo is still crazy about pie but she discovered that the high of being Seattle’s pie babe, aesthetically speaking, was short-lived.

She hopes that her forthright examination of her experiences—both pleasant and unpleasant—of living with the symbols she invoked will inspire others to locate their allies, peers and mentors.

“What I’m excited about and scared about is that by publishing these books and being more in the public eye, that’s an opportunity to talk about this stuff. What’s most important to me is to write a smart cookbook,”—something with the immortal weight of M.F.K. Fisher—she says.

“It’s not as much about me getting stuck as a ‘pie lady’ but it’s about this larger issue of being shoved into a role that’s palatable.”