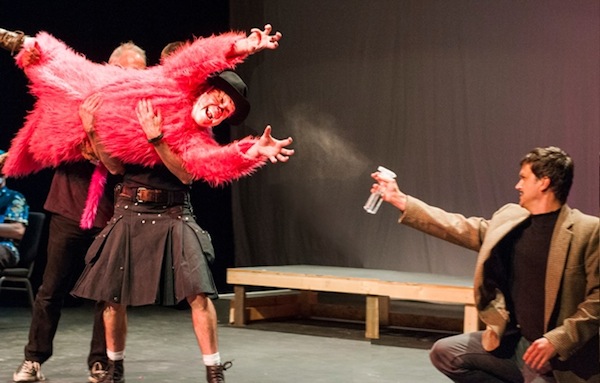 The bi-annual theatre festival 14/48 is one of the only Seattle theatre events where you’ll hear those around you gleefully whisper “this is so bad” just seconds before they spit their beer out laughing—because suddenly Charles Bronson is having a western dual with his snarky pet cat (in a pink fur suit and fake nails). What else could you expect from 30-odd writers, directors, musicians, designers and actors who create and perform 14 completely new shows in just 48 hours?

Founded in 1997 by Michael Neff and Jodi-Paul Wooster (“Three Card Monty”) and now jointly produced with One World Theatre, 14/48 is a well-oiled, well-loved mess of a machine whose creators look constantly for new wrenches to throw into its gears. For last weekend’s Kamikaze installment, 14/48 participating artists switched roles in a random drawing, making six out of seven writers and directors “virgins” to their discipline.

After completing a first round of seven plays on Friday, Saturday audiences witnessed an evening of shows themed “You’re Not From Around These Parts, Are You?”

Virgin playwright David Anthony Lewis kicked off the evening with a show about a vacationing accountant (José Amador) who ends up an extra in a zombie movie. As with several of the evening’s plays, there were instances when the dialogue started to wander and even the band looked a little bored, but Amador gave a winning, determined performance.

The band provided pertinent musical transitions—a twangy rendition of “Send in the Clowns,” “This Land” hummed with kazoos, an original Irish folk ballad and a sultry “I Think You Ain’t From Around Here” from veteran singer Alyssa Keene. Four virgin band members chimed in with tambourine, rattles, saxophone, and some brave and shaky vocals, which eased the audience in the nervous uncertainty of the entire show. I had to wonder, will they hit any high notes?

In Pamela Mijatov’s short and sweet Clown Lounge, a naïve and enthusiastic young thespian (Nik Doner) with a background in physical theatre auditioned as a rodeo clown hoping to make the most of the role by subverting audience expectation: “What if I had more interaction with the bulls?”

Surprisingly, only one show ended in an onstage bloodbath: Jon Lutyen’s Always at Your Back. Pattie Miles Van Beuzekom and Peter Dylan O’Connor were hilarious as an old and murderous Irish couple, particularly when they sang a creepy, heartwarming rendition of “Give Me Your Hand,” while fondling the severed appendage of Erik Van Beuzekom, who is left with a bloodied, Solo-cup stump.

Veteran playwright Ben Mcfadden’s A Legitimate Fear opted for the horror film set-up: a lost couple ran out of gas at night on deserted country road when right on cue, Corey McDaniel—seeming straight out of The Cabin in The Woods—materialized as a one-armed gas station attendant with a bum leg. The show’s banter and tightly transitioned plot reversals made it feel more fleshed out, along with the rest of the shows in Act Two.

In Charles Smith’s Bait, a 1930s city street corner slowly became a deserted patch of ice in the North Pole—a parallel that felt both natural and fresh. Under the direction of Hana Lass, a penguin-suited Mik Kuhlman and fur-coat clad Jaime Roberts created glacier-thick tension that broke when, in a move as sleek as a sea lion, Lass whiped out a harpoon-like fishing pole. The show’s initially ambiguous anthropomorphism hooked the audience with a menacing, homoerotic suspense that was powerful enough to far outlast 48 hours.

In Mark Fullerton’s The New Kid, Carl Sander, Basil Harris and Evan Whitfield nailed the energy of rascally foul-mouthed kids looking for excuses to hit each other while rhyming words with “cock” and associating dirty gestures with the names of common candy bars. Luckily new kid Jonah (Trick Danneker) knew that the rules are the same on every playground: If words don’t work, punch the bully in the face. It was a cute and well-executed anti-Sesame Street ending, although not a particularly surprising one.

While snippets of 14/48 may find new life in another show—perhaps one of Fullerton’s dirty schoolyard chants, or Lutyen’s murderous Irish couple—14/48 is really meant to help produce masters, not masterpieces. The fest is a communal exercise in creation and endurance—or, to borrow a line from Ben McFadden, an exercise in how to keep driving when you have to pee and all the Gatorade bottles are full. And if, like last weekend’s 14/48 drivers, you manage to hit a few solid marks along the way? That’s when you know you’re no longer a virgin.