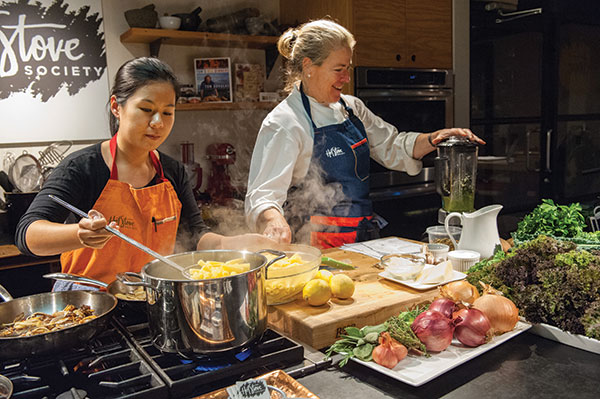 Like me. My mother’s culinary high point was nailing the Famous Amos chocolate-chip cookie recipe. My dad called M&Ms his “vitamins.” In an act of teenage rebellion I became vegetarian. After a few botched attempts at making veggie burgers in my teens, I forsook experimentation for saltines and beans.

On a recent Thursday evening I climb a set of stairs and enter Hot Stove Society. A door opens into a picture-perfect commercial kitchen decorated with squash, hand-carved totem poles and burgundy walls. An open bottle of 2000 Valdecampaña Crianza nestles among other wines and beers, next to a platter of perfectly quartered ripe figs, marcona almonds and pickled baby beets.

Students sit with notebooks at a spacious black bar overlooking a stovetop. Most are return visitors (“die-hard Hot Stovers,” I learn). One describes baking a perfect macaron at home after a class earlier that week. On the bar top, a huge basket bursts with bouquets of thick-stemmed, ruffling leaves of kale.

Chef Bridget Charters, director at Hot Stove Society, worked for 17 years at the Art Institute of Seattle before joining the Tom Douglas empire. Tonight she guides the class through an evening of kale-inspired “intensive edutainment.”

The class begins with a smoothie—and a history lesson. Bananas, raspberries, almond and coconut butter are blended with heaps of kale stripped from the stem. Charters explains that until three years ago, kale almost exclusively appeared as decorative garnishes at the country club. In part because of its robust vitamin and mineral content, kale has since become the It Girl of vegetables.

After the salubrious amuse-bouche, Charters returns to the blender to make a kale pesto with pistachios and garlic cloves. Drizzled over cold rigatoni with a dusting of shaved Pecorino Romano, the dish has an intense garden flavor.

Next up: a shredded kale couve a mineira (Charters’ take on a Brazilian recipe for collard greens). “This dish is why I started growing kale,” she says as she stacks bunches of lacinato kale leaves, rolls them, then cuts them into slender ribbons. These are placed in a pot and caramelized along with onions, garlic and a healthy amount of olive oil.

The lesson winds down as Charters adds the final touches to a simmering pot of callaloo, a Caribbean- and African-inspired pepper pot, which has been slowly taking shape for the past hour. Essences of bacon, thyme, taro root and coconut milk infuse the kitchen.

Now it’s our turn. Charters kicks the students off the bar seats and lets us loose in the kitchen. “Just play!” she instructs.

Compared to the Hot Stovers, my corner of the kitchen looks like Top Chef for Dummies, as I fumblingly caramelize my couve a mineira without setting anything on fire and pull together a kale Caesar with dressing from scratch—which previously would have been tantamount to parting the Red Sea. There’s a unique, masochistic joy that comes from the ache in your arms after you’ve whisked for minutes on end, watching oil and fresh-squeezed lemon emulsify before your eyes.

As the class draws to an end, Chef Charters helps us box up the food we’ve cooked, then ladles bowls of kale callaloo for everyone. When it finally meets my mouth, my lapsed-vegetarian heart skips a beat: chunks of bacon and kale swimming in a base of hot, buttery coconut milk are among the best things I’ve ever tasted. I’ll have to work up some courage to make it at home, but there’s hope for me yet.