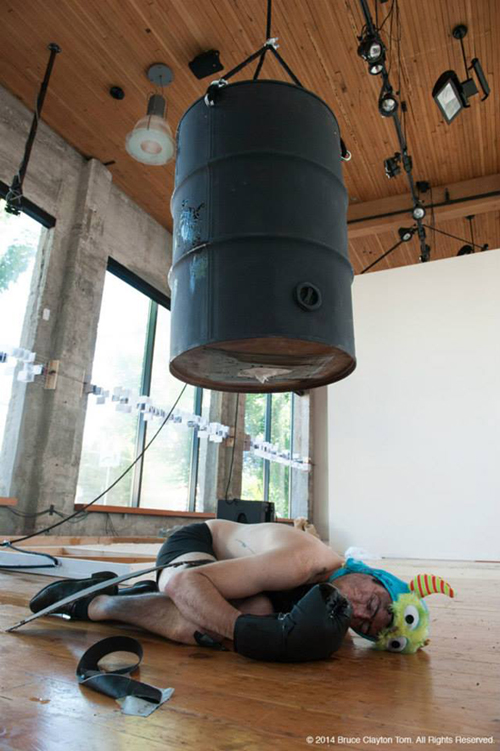 Two weeks ago, I was riding home on my motorcycle, thinking about endurance and singular focus. I had just left Hedreen Gallery, where I’d been listening to a panel of artists and curators speak about durational performance and the work being presented at Yellow Fish Durational Performance Festival.

Eighty-five degree sun was beating down on my leather-clad body. Sweat was pouring down my back, tickling as it ran, but my hands couldn’t stray from the bars of my bike. The top of my legs were baking. My inner thighs were seared by the 200 degree engine between them. I approached a turn that I ordinarily take quite low, but I was suddenly blinded by the glare of sunlight on blacktop. I couldn’t see. I also couldn’t slow down in the middle of this turn: control and a sense of calm were essential. I had to commit and trust my body through the curve, knowing that I and this machine had worked together hundreds of times to perform this maneuver. That moment—the experience of feeling liberated and hyper-present in the face of variable adversity—wasn’t that dissimilar from the feelings conjured by the type of performances we’d been discussing.

The question was raised during the discussion: why is this type of performance work becoming relevant again, or has it always been?

I believe it has everything to do with action that is deliberately focused, present, and intentional. I can’t help but wonder if we spend more time on automatic drive than we do in awareness; relying on autocorrect, spellcheck, cruise control, and redundant motions to guide us through our day, repeated so often we do them without thought. Durational performance is the opposite of this—an exact measure of time devoted to an intensely attended action or inaction. For most of us, this isn’t something that happens regularly.

As the panelists tried to tease out some answers to the questions raised by durational art, most agreed: its draw has to do with the fact endurance is a funny way of forcing someone to bear witness to the self. Different from other forms of art and spectacle, participation is brutally passive. The viewer does not engage.

Velocity Dance Center’s artistic director Tonya Lockyer described it as a kind of reprieve, a forced break: “I don’t have to do anything but this, for now.” All cares, thoughts, troubles, or worries take less precedence than the act you are performing. It is what matters. Nothing on the outside of the self, nor anything inside. No matter what may happen to or around you, you are here breathing, moving in whatever way necessary (or not); consuming, eliminating, experiencing, being.

I identified with curator and writer Liz Brown’s admittance of discomfort and impatience with this genre, while understanding its historical presence (in both art and religion). She spoke of a video installation by Bruce Nauman whereupon “the struggle passed and you fell into the magic of the incidental transitions. Each moment had magnitude because you had waited for it so long.” It’s one response to society in perpetual haste, outpaced technology, rapidly pacing gentrification and other 21st Century woes related to everything moving so fast. In a sense, durational performance exists outside of time, in a world that is so strictly regulated by it.

This happened to me. This past Friday I entered Hedreen Gallery to a low, thumping, pulsing sound. I found it instantly soothing as I sank into a wooden bench next to the window. Projected onto a screen was an infrared image of the slowly turning sun. On the floor, curled up into a ball, was a man in Oxford shoes, a furry hat with horns and little else. On his hands, tucked under his chin, are what looked like boxing gloves. He appeared to be fast asleep. Beside him lay a collapsed canvas with a square cut out and a bowl of something like motor oil. In front of him trailed a path of sticky footprints left by a bare foot. The sound continued to throb, burrowing into my head. I had no idea what was happening, or what had happened.

I experienced it for half an hour. I knew that events had occurred—or would occur—that I didn’t see. And I knew that much of this wouldn’t be explained, and that I left with more questions than answers. But I’ve decided I like this. I didn’t need to know anything other than this thing that was happening right then; and I didn’t have to be anywhere but there, in that moment; breathing alongside the man on the floor.

Yellow Fish Epic Durational Performance Festival, curated by Alice Gosti, runs through August 2 at the Hedreen Gallery. The Festival wraps up with an artist talk on Friday August 1, during which past and present performers gather to discuss projects, ideas and experiences with durational performance.