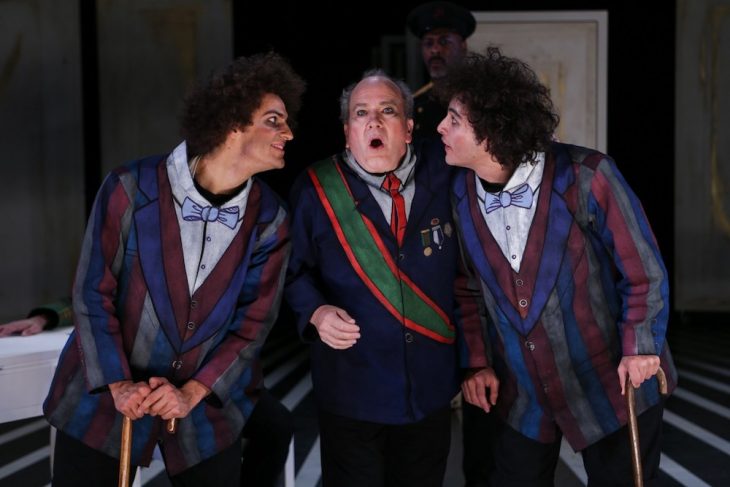 It’s hard to view any sort of art today without making connections to the Trump administration and the shockwave of violence and self-interest spreading in its wake. Rewind nearly two centuries and you’re in the midst of The Government Inspector, Nikolai Gogol’s satire of political corruption, adapted by Jeffrey Hatcher and directed by Allison Narver, now running at Seattle Shakespeare Company.

A crass comedy of errors, The Government Inspector follows a group of meddling citizens in a backwater Russian town, who learn that a government inspector is set to visit them incognito and report back to the Czar. When two local men (Kevin Kelly and Arjun Pande) tell the mayor (a blustery Rob Burgess) that a mysterious man at the inn is surely the government inspector (he’s actually the rogue debtor Khlestakov, played by R. Hamilton Wright), it sets off a series of miscommunications, bribes and escalating ploys, as well as a twist that in hindsight should have been obvious but, if you’re like me and allow yourself to get completely wrapped up in comedic mishaps, comes as a delightful clincher in the final seconds of the play.

Part of what makes this production successful is the cathartic nature of laughing at people’s stupidity. It gives us a sense of superiority—a self-absorbed and mean act in real life, but in this case, none of Gogol’s characters have any redeeming qualities to make them sympathetic. They’re clueless (in the right context that can be endearing—this isn’t it), selfish, corrupt and willing to throw each other under the bus to try and win favor with Khlestakov.

Whether it’s the mayor’s moody and eccentric daughter (Shanna Allman) played against her over-the-top, sexually driven middle-aged mother (a scene-stealing Sara Waisanen), or Khlestakov’s cloying vanity in contrast to his servant Osip’s (Jonelle Jordan) practical outlook, Inspector’s exaggerated stereotypes play off one another to great comedic effect. Sure, there are plenty of groan-worthy quips, but there’s also something refreshing about a play where you’re just meant to laugh.

Narver directs her cast with lighting-quick timing—their physicality, both in interactions and in the body language that punctuates their speech and embodies their characters, is spot on and essential to pulling off this kind of work.

The costumes (Pete Rush) and set (Julia Welch) help to heighten the sense of confusion and chaos while placing the characters in a space that nods vaguely to the 19th century. The set includes a series of doors on wheels that make it feel like you never truly know if someone is coming or going, and the black-and-white striped flooring adds a carnival-esque aesthetic—a visual cue to the buffoonery happening on stage. Several actors play more than one character, and the constant costume/wig/facial hair swapping leaves them each looking a little more bedraggled with each appearance. Costuming is a huge factor in successful comedy, and the slightly thrown-together nature of these make it easier for us to laugh at the characters—they not only act like fools, they look like them too.

While the parallels between Gogol’s work and the current social and political climate are clear, not every piece of art needs to act as a lens through which to view the present. All governments are corrupted in some way, and all people fall prey to their vices. It’s OK to use theatre as a form of escapism; sometimes the soundest advice is to choose something that really makes you laugh.