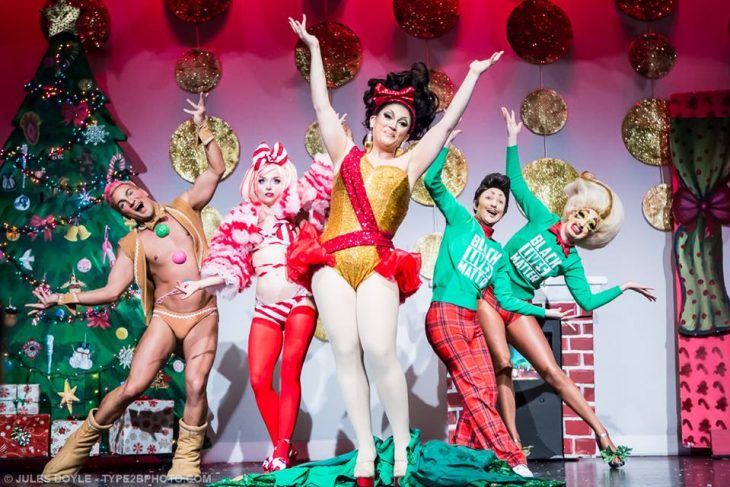 Homo For The Holidays, photo by Jules Doyle

At 82, Julian Priester still plays trombone, the instrument he played with John Coltrane and Sun Ra and on his own soul-jazz classic, 1974’s Love, Love. What’s more, Priester, who retired from Cornish in 2011 after more than three decades teaching music there, still lives in Seattle. Tonight he and Seattle’s finest jazz players perform to raise money to cover Priester’s mounting medical bills. —Jonathan Zwickel

Perfume of the Lady in Black

Francesco Barilli’s 1974 chiller is a lesser-known gem that follows a troubled chemist (Mimsy Farmer) who’s either a hatchet murderer, the target of satanists or both. The elegant, dreamlike vibe culminates in one of the most disturbing WTF endings in the very WTF-laden world of Italian horror cinema. —Tony Kay

I’ve been alternately chair dancing to “A Different Street” and chair brooding to “Violence,” songs that exist at opposite ends of FKL’s emotional spectrum. Tonight the Seattle/UK electro-pop duo celebrates the release of their latest LP, Out of Tune—our current Album of the Month—with a stellar lineup of openers, equally moody and evocative. —Jonathan Zwickel

Homo for the Holidays

The instant Halloween is over I get excited about this holiday tradition from DeLouRou Presents, aka BenDeLaCreme, Kitten LaRue and Lou Henry Hoover. It’s a comedy/drag/dance/cabaret/burlesque extravaganza with glittery reindeer, a selfie-obsessed Sugar Plum Fairy, a Jesus cameo, a sexy gingerbread cookie and much more, featuring some of the sharpest, funniest talents in town. Runs through Dec. 30. —Gemma Wilson

Hari Kondabolu—whose new documentary you must watch—is a semi-erstwhile Seattleite who returns regularly to work out new material in small venues for a devoted local following. On this occasion, fans will have a chance to check out the finished product on the big stage in this filming for his new standup special. —Brett Hamil

The Chanukah Party, Hosted by Blammer and Wong

“Come see the trees like never before as we illuminate the museum by candlelight. We invite you to BYOF: Bring your own flashlight! Take in the beauty of bonsai while you enjoy a cup of hot cocoa.” OH HELL YEAH. This is how to spend your best Solstice Sunday. —Jonathan Zwickel