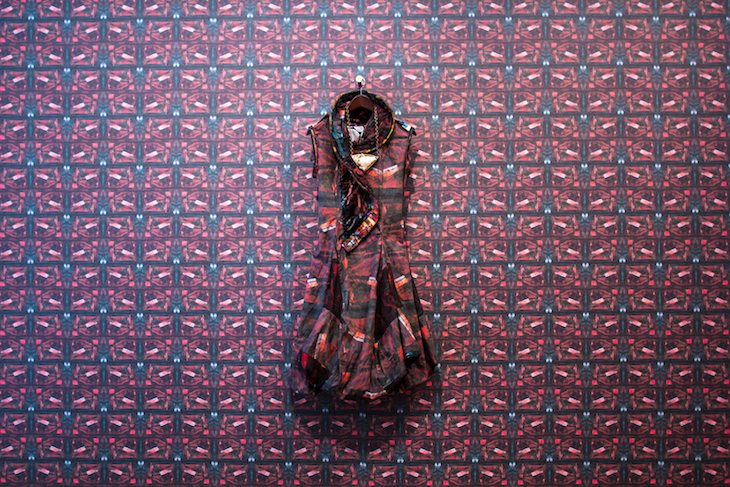 When Jono Vaughan accepted the Betty Bowen Award at the Seattle Art Museum last November, the Seattle-based artist chose not to address the audience. Instead of speaking about her winning entry, Project 42, she invited three artists with Native heritage—Natalie Ann Martinez, Amanda Pickler and Catherine Cross Uehara—to memorialize Fred Martinez, Jr., a Navajo, trans-identified, Two-Spirit teen who was murdered in Cortez, Colo., in 2001. Vaughan believed that the nature of the project, which is named after the life expectancy of transgender people in the United States, asked for a commemoration of the deceased rather than a celebration of herself.

Martinez is one of the 42 trans people Vaughan spent the last six years honoring as part of Project 42, an ongoing series in which she creates a garment for each victim of violence. The bright, colorful patterns are misleadingly beautiful: They’re based on screen shots of the Google Earth locations of the murders, images that Vaughan manipulates into abstract patterns, metaphorically mirroring the pattern of violence trans people face. On the first floor of the Seattle Art Museum, parts of a gallery are wallpapered with these bright motifs, functioning as backdrop for the garments.

“I don’t want to only talk about myself,” Vaughan says when we meet to talk about the Betty Bowen Award and the associated show. “The project is about raising awareness about what’s happening: Last year was the most dangerous year on record for trans people, and specifically for womxn of color. Over 92 percent of trans people killed are trans people of color. That intersectionality is important.”

The show at the SAM memorializes three murdered trans women: Myra Ical, Deja Jones and Lorena Escalera Xtravaganza. Their lives will be further honored by unannounced performances in the SAM galleries, by performers such as Randy Ford, who will honor Deja Jones.

To pay homage to Lorena Escalera Xtravaganza, who was a performer and member of the renowned New York underground ballroom House of Xtravaganza, Vaughan created an extravagant altar, which includes an antique dress with a long, suspended train extending into the gallery.

This installation is much more dramatic and three-dimensional than the way you usually install your other garments. Why is that?
It was partly driven by the space and by the idea of who Lorena was: a performer. It seemed logical that the best way to memorialize her was with something extravagant, performative and theatrical. When it gets darker in the galleries, the dress is also lit up more by the spotlights. And she really did love the spotlight. This piece was also made in collaboration with artist Lesley Dill, who chose a poem of Emily Dickinson to line the inside of the train of the dress.

How does the collaboration process work?
I ask my collaborators to personally and independently investigate the person they are memorializing and to find something they feel connected to. Dill chose this poem. When I work with someone, I step out of the collaboration. Maybe I’ll say “Does this feel okay?” or “Does this make sense?” But I’m just there as some sort of guide.

Why do you work with multiple people—sometimes even multiple people per dress?
You can only raise awareness and ultimately bring an end to this issue through collaboration, community and engagement. Originally the whole project was geared towards working with white, cisgender individuals as collaborators. I wanted to work with people who I knew were allies and start getting them to think about it further. It was an outreach project. Back then, in 2012, this issue was known in the LGTBQIA community but wasn’t really discussed outside of that. That has changed in the last few years, so I’ve started to include people from the community as well.

Would you still call it an outreach project?
There are still those outreach components to it. Visitors are invited to add flowers to the memorial installation for Lorena, for example. Many of my assistants are also students or former students from Bellevue College, where I teach. There are more and more people making the garments to expand the idea of collaboration and community. I have to say though that the intersectionality of the issue is the hardest for people to really understand and analyze.

How do you bring that to the fore?
It’s very difficult. I’m hoping to do that with more collaborators. Because they have to do their own research about the lives of the individuals, they have to really engage with it. They might end up sharing that information, which is important because a lot of these murders are unsolved.

You start from a screenshot of the Google Earth locations of these murders and then add digital layers onto it with photoshop, printing and fabric. Why that process of mediation?
Technically I have gender dysphoria—and even though I identify as trans, you could say that it means that I am not attached to my body. In that sense, the idea of the satellite makes sense, in terms of keeping a distance. Technology also plays a role in a lot of trans people’s lives. Often, they can only be themselves thanks to technology, find a community online. When I was younger, the only word I had for myself was “monster.” We didn’t talk about trans-ness and the internet has really changed that.

I also like to add various symbolical layers onto each other. One pattern is based on a photo [I took from an airplane traveling home] after my father died. Another I made for an individual who was found dead in hotel room number 105: One layer is 105 lines, and one layer I drew for 105 seconds. Colors might come from clothing that an individual was wearing, or from the surrounding areas where they were found.

Those details almost clash with the beauty of the patterns and the clothes. Is that on purpose?
Yes. I’ve made a dress for the project,and I wear it to conferences. People come up to me to say they like the dress, which I then use as a way to talk about the issue. So my work is designed to pull you in. I want people to have an accessible experience in order to have complex conversations.

The Project 42 exhibition runs until Aug. 5 at the Seattle Art Museum. Jono Vaughan will lead a public workshop in flower-making on June 7 from 5–7 p.m. Performances will occur throughout the exhibition’s run.