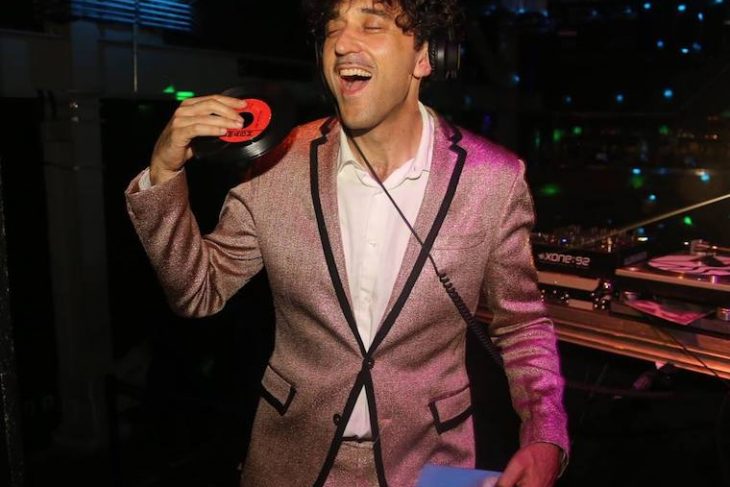 Trust the DJ. It’s a simple statement with major implications. Trust the DJ, trust the scientist, the economist, the lawyer, the professor. Trust the expert. They work in a complex milieu and to simply arrive where they are—whether that’s a dance party or Congressional hearing—they’ve done more work than you have. If you can only manage to believe that they have your best interests in mind, then you can join them on a journey of discovery.

I mean, don’t be dumb about it. Trust freely, but be choosy about whom you trust. Look for the proper indicators. Such as the puddles of ink splashed by the New York Times, VICE, Rolling Stone, LA Weekly (RIP) and South by Southwest for veteran DJ Jonathan Toubin. They all agree that Toubin and his Soul Clap and Dance Off party, which has run in Brooklyn for more than 10 years and which he brings to Seattle this weekend, is a crown jewel of American nightlife.

I caught Toubin’s set at Pickathon in August—yes, a DJ played vintage 45s to a dance floor in the woods outside Portland—and he positively wrecked the fest. From a low stage surrounded by hay bales and disco lights, he played slam-dunk music, old American soul and proto-garage rock, anonymous and timeless, the kind of stuff that nobody with ears and feet can deny. And along with the music, Toubin himself was the party, hyping the crowd from behind the decks, shimmying his sharkskin-suited self through the dancing throng, generating the kind of collective benevolent, life-affirming madness that only comes from letting go of hangups and putting your trust in someone else.

I spoke with Toubin ahead of his arrival in Seattle this Saturday, when he brings Soul Clap and Dance Off to the Clock-Out Lounge.

You’re more than a DJ, Jonathan. You’re an entertainer. You’re doing way more up there than most DJs ever will. How’d you arrive at this DJ-impresario role? I imagine it’s hard but you make it look easy.
It came out of doing it awhile. There’s a certain dynamism to the music that I play. I find it strange that people wanna play the music but not accept the other aesthetics of the stuff. It’s OK—not everyone needs to get into what they do at that level. There’s a contemporary thing in music too where people just don’t really wanna put the effort into the aesthetic—how it looks, how it sounds, the energy of the thing. James Brown put effort into all that stuff. Into the competitive economy of the Chitlin Circuit and soul revue—people had to be really good. Rock ‘n’ roll had to do a lot to make it memorable, and to make it look like you’re putting love into what you’re doing. I want people to think it matters to me because it does.

You’re living the music. And encouraging other people to live it, too.
Oh man, it’s a whole world. For me, because I play old music, and most of my favorite aesthetics are from the ‘50s and ‘60s in terms of furniture, clothing, music, it’s necessary to be versed in the history. People can find me and ask what the records were. I like to yell what it is whenever I have the mic. Some of these [artists] are alive and I hire them to come sing or play whenever I can afford to. And finally, I started a YouTube to make a deal with myself that with all these obscure records… I have no idea who half this stuff is. And a lot of times nobody else does. I find these records I love and I don’t know anything [about them] so I put them on YouTube and then sometimes I learn a bit. Sometimes people’s grandkids get on there and say, “Hey that’s my grandpa!” or “That’s my father!”

These records, ultimately it’s party stuff. But it’s also a huge statement about culture, time, music, history. Everything ties together to make sense about the puzzle. These pieces are small clues, some revelations about what life was like, what these people were thinking, why they were playing these compositions, who was in the band. You don’t wanna get too nerdy about it—the main thing has gotta be the party. But there’s still so much you can do to enlighten people. A lot of people see me doing what I do and they go on a journey listening to things they’ve never listened to. But most people are drunk or high and your job isn’t to give a university lecture. You can look like a snob that knows things others people don’t. Then there’s a way to make it more disarming and more party-oriented.

What I’m trying to say is that I really just wanna play these records because it’s good party music, but I do put care into what’s on the records and I like learning who these characters are. Every day it’s a new step.

You make sure you look the part, too.
A lot of it is like live rock ‘n’ roll—you make an ass of yourself. You dress in a way [that] you look like a clown. A friend makes my suits and I love them, but if I wanted to look serious I wouldn’t wear a glitter suit. You take chances to let people know you’re there to celebrate. You stop the music, shout out people, dance through the music, clap along. You become part of the party itself. It’s difficult to work in music that people don’t know for regular party purposes and not as some expression of a subculture you belong to or hobby you have. Purely to rock the party and not getting carried away with your own identity, but rather what the records mean to the culture.

I saw major technical skill at Pickathon. You were spinning 45s, matching beats, interacting with the music and the crowd, being host as much as DJ.
I get a lot of practice. My Friday I’ve done over 500 nights, over 10 years in New York. I try to always stay in the city and not miss it. I play around 30 records an hour, 150 throughout the night. It’s a lot of records in that time, and in doing so you learn to talk to people while you do it. I used to play almost every day when I first started, an art gallery or happy hour, and then go to my real job and then play an after-hours later on. I got a lot of practice with people and parties and also how to do those records and make them effective. I improvise the whole time so it’s all reactive. And you always have something different in your box, and sometimes you’re three or four records ahead of yourself in your head and someone comes up with a request and if you’re too involved you forget where you were. Which is not the end of the world. But it’s an easy job to get distracted in.

You’re making meaning for people.
The people are doing that, it’s not me. I’m accommodating who’s there with what I have and finding what we have in common. Being four songs ahead is part of the Buddhist cycle or whatever—you’re hitting the signposts you hit before and getting more perfection out of it, but you’re going with the flow of things you can’t control and figuring out a way that the records and the knowledge and your ability connect with the people. In a sense, they write the story and I help them write it, you know? If they don’t dance I’m not gonna play another song like that. If they dance I’ll continue to do what I’m doing. The narrative changes every time.