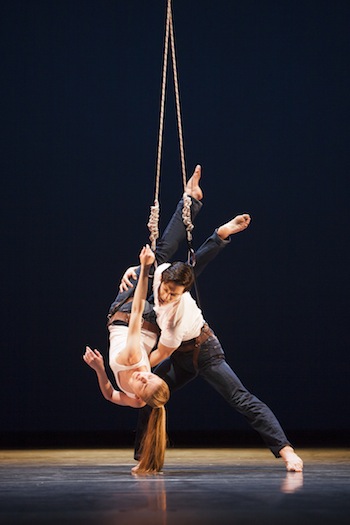 Director’s Choice is an annual favorite at Pacific Northwest Ballet, a program featuring an assortment of pieces handpicked by artistic director Peter Boal. It usually features a mix of works both contemporary and classic, generally with a world premiere to top it off. This year offered a markedly different degree of contrast: an upbeat jazzy number from a Broadway choreographer, an aerial pas de deux and a disappointing contemporary world premiere that’s lovely to watch but not particularly compelling. And a standout, State of Darkness, a 36-minute solo set to Stravinsky’s Rite of Spring. As performed by Jonathan Porretta on the night I attended,  it was absolutely stunning—a hypnotic, grueling, not-to-be-missed performance of some of the best dancing I’ve seen in years.

Opening the program was TAKE FIVE…More or Less, an ensemble piece set to energetic swinging jazz (score by Dave Brubeck and Paul Desmond) featuring ballerinas in brightly colored dresses and men in all-black. Playful and energetic, dancers pair up in duets, the women sassy, the men distracted from their partners when one dancer comes out shaking her shoulders, flirting with a twinkle in her eye—no surprise, as it was choreographed by Tony-award winning choreographer and director Susan Stroman. The piece definitely has Broadway-musical appeal and personality and the ensemble sections are strong with head-high kicks, assembles and precise turns. Lindsi Dec sucks in the audience with her solo and Kyion Gaines is a standout with his black hat and tap solo.

Kiss is a very different piece, an aerial pas de deux featuring two dancers suspended from harnesses above the stage floor. Set to the minimal music of Estonian composer Arvo Pärt, Kiss is about love—and all of the emotions that come with it. Carla Körbes and James Moore perform with a mix of angst, heartbreak, and joy, their long sweeping motions propelling them apart and back together again, one dancer always pushing the other away, only to come back to an embrace, a connection and a kiss.

In 1913, Igor Stravinsky’s The Rite of Spring premiered in Paris. When Sergei Diaghilev’s Ballets Russes performed, the audience came dangerously close to rioting in response to the avant-garde, non-traditional choreography. On Saturday night, in State of Darkness, choreographed by Molissa Fenley to Stravinsky’s score, Jonathan Porretta powered through a 36-minute solo that captured a similar electric, almost crazed energy, causing the audience to explode into a frenzied standing ovation. It was one of those rare, special performances where something powerful takes over the stage, the dancer an all-encompassing artistic force. Moving from the opening of a bassoon solo in high register through sections of grand pounding rhythms, brass, strings, percussion, Porretta, wearing simple black spandex pants, displayed the strong, pure athletics of dance. Every movement was intense and controlled—from great jumps and kicks to the smallest motions of the arms. He never flagged, appearing masculine, yet possessing a grace and fluidity—a juxtaposition that augmented the brilliance of his performance.

After Porretta’s performance, it was difficult to think about anything else. Memory Glow, the much-anticipated world premiere from Spanish choreographer Alejandro Cerrudo, was pretty but not overly impressive, its ensemble sections not as strong they could’ve been. The duets and trios, however, were graceful and gorgeously danced, with the male-female duets expressing strong emotion through touch. Different couples seemed to embody ideas of control, love, loss—one dancer takes the hands of another and covers her eyes, one woman ducks in escape under another man’s arm, only to be picked up by another. The stage is dark, lined by a square of lights, emitting a dreamlike appearance. Dancers fade in and out of the darkness, their ghostly forms at the back of the stage, beautiful and haunting.