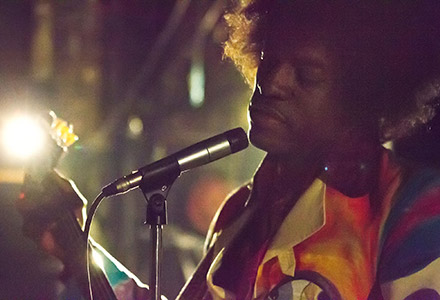 Jimi All Is By My Side

A decade after Jimi Hendrix died in 1971, Seattle radio station KZOK sponsored a fundraising drive to erect a memorial to the native-son guitar hero in one of the city’s parks. Authorities balked. “A city park is not an appropriate place for something like that,” huffed then-Parks Superintendent Walter Hundley. Another official grumbled, “If we fill parks with statues, it would look like a cemetery.” A “compromise” was reached: The city placed a commemorative rock in the African Savannah section of the Woodland Park Zoo.

To be fair, Hendrix wasn’t especially enamored of Seattle either. After leaving high school and joining the army, he rarely came back to his hometown. And since Hendrix first broke through in the UK, he hardly seemed to belong to Seattle. Over decades, that detachment changed. On November 27, 1992, which would have been Hendrix’s 50th birthday, Seattle mayor Norm Rice issued a proclamation citing the date as “Jimi Hendrix Day,” the first official recognition Jimi ever received from the city. As a mayoral aide stated, “The mayor felt that someone who had contributed to the music industry as Jimi Hendrix had, there was no question he deserved honor and recognition in his hometown.” The Experience Music Project museum, which was initially focused solely on Paul Allen’s Hendrix collection, took its name in part from one of the Hendrix’s bands, the Jimi Hendrix Experience. Institutions that have long had a problem with Hendrix’s admitted drug use now embrace him; the United States Post Office issued a commemorative Jimi Hendrix stamp this past March.

SIFF gets in on the action with this year’s opening night film, Jimi: All is By My Side, which kicks off the fest tonight with a little rock ‘n’ roll pizazz. Numerous Hendrix feature films have been mooted over the years, with Will Smith, Eddie Murphy, Lenny Kravitz and, inevitably, Prince suggested for the role. The one that made it to completion stars André Benjamin (aka OutKast’s André 3000) and features a script by John Ridley (Oscar-winning screenwriter of 12 Years a Slave), who also makes his debut as a feature film director.

Ridley is unimpeded by not having clearance to use Hendrix’s music, as the film focuses on one year in Hendrix’s life, from his discovery in New York City to his first success in London. Benjamin walks away with the performing honors, but the story tends to drag, more atmospheric than crackling with vibrancy. After its SIFF debut, the film is scheduled to open mid-June.

Not to be outdone, Experience Hendrix LLC, the company that oversees the Hendrix estate, has announced plans for its own biopic on Hendrix; no worries about using the music in that one. Presumably the estate’s film will encompass the entire story, glossing over Hendrix’s troubled relationship with his family in Seattle in favor of the glories he later went on to accomplish. The narrative arc of Hendrix’s life, from near poverty to worldwide acclaim, is so broad that just about anyone can find an appropriate point of entry. Jimi: All is By My Side presents a slice of life from the time when the man was changing into myth.