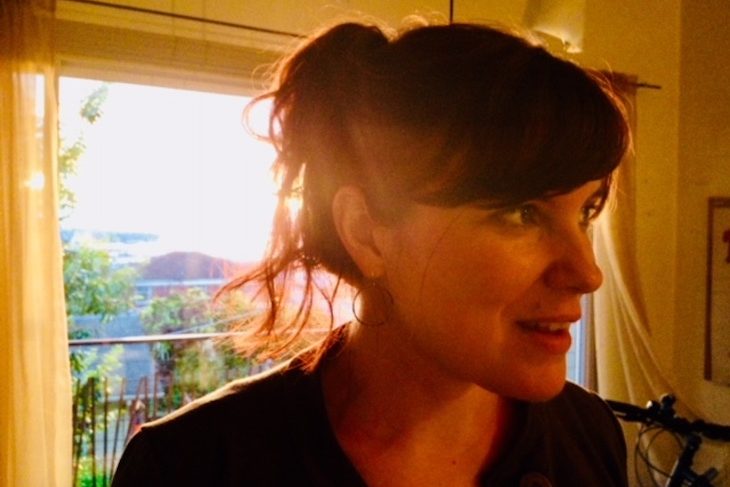 When you enter the world, blinking is the first hello—everything here, then gone, then here again. In Tibet, the traditional greeting is to say tashi delek, then stick out your tongue to prove you are not the black-tongued king, reborn. In Tuvalu, press your cheek against another and take a deep breath together. In the barren womb of the Bedouin’s desert, rub noses. If I have a thing for you, my hello is to give you the cold shoulder, get drunk, then disagree with everything you say. A friend calls my flirtation style Charm School Dropout.

As Garry Shandling used to say, My friends tell me I have an intimacy problem. But they don’t really know me.

After we met, I waved goodbye and ran straight into a wall. A nasty goose egg over my eye for a week. I sat in my apartment, pressing frozen peas to the storm-colored bruise. I imagined you on the other side of the door, turning a key in my lock.

I don’t know how to say what I mean. As a kid, I mixed up the words for things. Cat, I’d say, pointing at an alarm clock. Taxonomy remains mysterious. Walking around my neighborhood, I don’t know the names of things. Sinister witch-fingered bramble. Orange thing I want to call persimmon. The part of the foot that keeps me upright. The sinewy blue veins under the tongue. How do I not know the basic recipe for standing and speaking?

Tripping balls on psilocybin, I claimed to speak the language of density. I’m an expert in the Periodic Table of Leaving, I said. How the atoms of regret attach. I explained how denial is helium; self-preservation, oxygen. Okay, you said. I see where this is going. Guilt is the heaviest element. No, guilt is in the middle. Guilt is equal parts hanging on and letting go. I had a million questions for you, but did not know in which language to ask them. Then it occurred to me: Mercy. That’s the heaviest element of all.

Over the years: threats of rings, proposals of buying property. I wanted to crawl under the house like a sick cat—a house I never wanted to own. Give me family at a distance, domesticity at arm’s length. How will I ever build a life with someone this way? I do not know what to make of the 1950s father inside my chest, shuttered behind his newspaper, longing for love at a remove.

When speaking the language of How to Dress a Wound, there’s a secret to avoiding infection: Wrap the words tight but still let them breathe.

For you, I would climb the smallest mountain, I would swim the shallowest sea. It was a joke I said to cheer you up. You laughed, but I was frightened. What if I was not capable of giving even the smallest thing? I could not shake images of myself drowned in a puddle, buried under an avalanche the size of an ice cream scoop.

Fifty years ago, a teenager in China fell for a much older widow. Elders in the village had the same verdict for anyone who fell in love with a cougar: certain death by wrestling an actual cougar. Instead, the couple decided to run away and live in a cave. To help his wife navigate the terrain, the man spent decades hand-carving 6,000 steps into the side of the mountain. But what if she received the effort as a burden, an act of generosity she could never reciprocate? What if all she needed was a zipline?

I’m terrible at goodbyes. I ghost at parties, slink out back doors. I hate the ceremony, the interruption. Sometimes the problem with saying goodbye is you are fluent in a language only understood by one other person. And when that person is gone for good, all you can do is grunt in the direction of what’s missing.

After her husband left her, a woman in London removed a tattoo from her own arm with a scalpel, a tattoo she’d gotten in homage to their relationship. She gift-wrapped the large flap of skin and mailed it to her ex. I bet this happens more often than you’d think—FedExed epidermis, inked with failed romance, soaring through the ether. Her tattoo said Chopper’s Bitch.

Marina Abramovic and her lover broke up by walking along the Great Wall of China from opposite ends. After 90 days and 1,500 miles each, they met in the middle, embraced and said goodbye.

Lord Byron’s ex once sent him a bloodstained hunk of her pubic hair. What is the message in such a gesture? I miss you. I hate you. I’m not pregnant?

I wanted to tell you. We wore our love like a monk’s robe, a winter coat and a military uniform. There was meditation, protection from the elements, friendly fire. For the longest time, I couldn’t find the words. Go, I said, pointing at love. When you left, a terrible, helpless beauty seized my body. And then I started to speak.