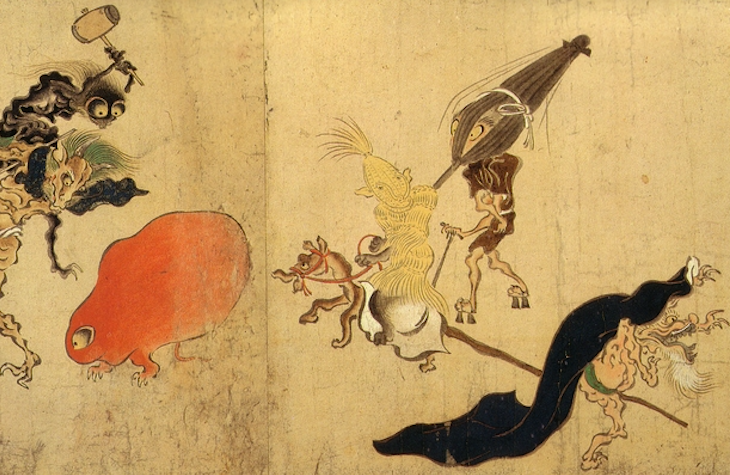 A portrayal of the Hyakki Yagyo Emaki, the night parade of 100 demons, created during Japan's Muromachi period (1338–1573).

In Japanese folklore, the Yokai are ghosts, demons and other supernatural creatures dwelling in the netherworld. Every so often, these beings leave their homes and roam the real world in a full-on spectacle of horror known as Hyakki yagyo, the night parade of 100 demons. And woe be to those who encounter the Yokai when the monsters visit our world.

It’s a potent premise for The Night Parade, an immersive work of theater opening this month at an undisclosed location as a collaboration between Pork Filled Productions and REBATEnsemble. “The legend of the Night Parade has no plot structure,” says Tom Dang, the production’s co-writer, director and co-producer, as well as REBATEnsemble’s artistic director. “From what I could find out in my research, it was just a device used by storytellers starting in Japan’s eighth century Heian period.”

The earliest Yokai stories were immortalized via wall-sized pictorial scrolls. The first Heian-era scroll to gain wide popularity in ancient Japan was The Night Parade of 100 Demons. “It was basically fan fiction of all of these favorite ghost stories on one scroll,” Dang says.

The Night Parade script by Dang and Kendall Uyeji embraces the spirit of the Yokai stories, incorporating two of the mythos’ most distinctive entities: Yuki-onna the Snow Queen and Shuten doji, a disgraced monk turned fierce Oni (demon). “When you’re bringing the Yokai to life, there are some givens,” Dang says. “Yuki-onna needs to be some sort of Ice Queen figure, and Shuten doji will always be an ogre with fangs. But from there, we can use some abstraction.”

The play is set largely at the opening of an art exhibit for the late (fictitious) Japanese artist Shunkuno Arashi. The exhibit’s unscrupulous curator has effectively stolen Shunkuno’s artwork for his own gains and the artist’s angry spirit is eager to take revenge, with help from the demonic Yokai. The Yokai are also shape-shifters, so no one can be trusted.

The Yokai will be rendered with hand-crafted masks, stilt-walking, body-morphing costumes, a dynamic indoor space that metamorphoses as the horror intensifies, lighting effects and an animated interlude. “But the acting ensemble, their choreography, and how they interact with the audience, is at the core,” Dang says.

Dang’s and Uyeji’s script also draws inspiration from Kabuki and Butoh, the multiple viewpoints and subjectivity of Kurosawa’s Rashomon, the cosmic horror of H.P. Lovecraft’s literary canon, and artist Yayoi Kusama, whose life offered Dang and Uyeji a compelling blueprint for the fictional Shunkuno. “[Kusama] is a compulsive artist who creates because she can’t resist the pull of finishing a piece,” Dang says. “We wanted to bring that sense of compulsion, that sense of seeing what others don’t, into Shunkuno Arashi.”

Dang, who spends a portion of his time as a film and TV actor in LA, says The Night Parade doesn’t only summon the horrors of Japanese folklore; it taps into contemporary fears as well. “A long time ago, what frightened people was fangs and tentacles, and becoming animalistic,” he says. “Those things still frighten people. But now, we’re more afraid of the unknown: Things we can’t perceive or understand.”