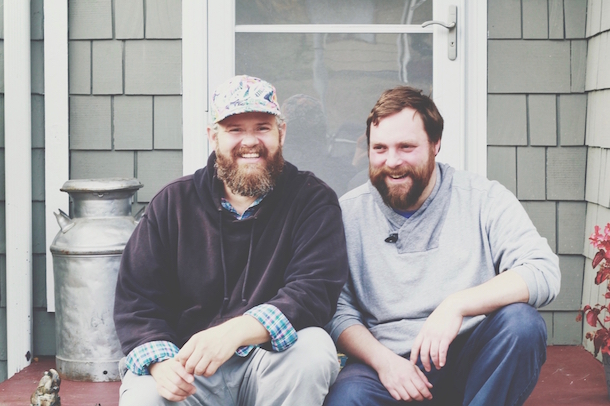 “I’m the heart. He’s the head,” says Joey Veltkamp, pointing at his partner Ben Gannon, seated on a ferry bench between Veltkamp and the expansive windows of the boat carting early Saturday risers from Bremerton to Port Orchard.

Gannon is an artist working in a wide range of media. For his most recent exhibit at Joe Bar, he exhibited a series of pearlescent, crinkled objects suspended as if floating against the walls—pieces that at first glance appeared as fragments of folded fans or crumpled paper sheathed in glossy enamel. (In fact, they are sheets of wrinkled paper meticulously dipped and dried over and over in acrylic medium until rendered rigid.) Gannon’s sentences are dense with aphorisms and words such as ‘telos’ and ‘exquisite;’ often they culminate in a hearty, billowing laugh.

Veltkamp, who got his start making paintings and drawings, has turned to textiles in recent years—specifically quilts. They have been shown at the Tacoma Art Museum, SOIL and Greg Kucera, among other regional galleries.

While answering questions, Veltkamp jumps from thought to memory and back like a young foal chasing a rainbow in one of his paintings. “Somebody will ask me what color the sky is, and I’ll say blankets,” he says, laughing. These days, he’s consumed by the art of making quilts that provide both comfort and uncomfortable truths, such as We’re all gonna die.’

Outside the shelter of the ferry, the water in the Sinclair Inlet still radiates a dark summer blue. The departure of the summer season is one of the losses lamented in Pantry, a conceptual show featuring some 200 jellies and jams made by Gannon and Veltkamp, opening at Calypte Gallery this Thursday. Pantry also marks Calypte’s finale. After presenting one-night-only shows for three years out of their Capitol Hill apartment, Andrew Whitver and Kevin Brannaman are closing their home gallery as they prepare to move to Spokane.

“It feels so appropriate that our work, which is interested in questions of home, departure and memory, should be the last show,” Gannon and Veltkamp agree. Recently, they relocated from their Eastlake apartment to a picturesque house in Bremerton. They’ve created new routines in their new habitat, such as Saturday morning visits to Port Orchard’s farmer’s market for jam-making material. While the summer market provided an abundance of berries and grapes, the arrival of autumn presents something new: quinces.

“We’ve talked for a long time about wanting to live rurally and more sustainably,” says Gannon, while the couple washes the quinces in their kitchen. “The election of Trump woke us out of a comfortable stupor. Making jams is our effete version of being preppers. Preparing flower-blossom jelly is our version of stockpiling ammo.”

The concept for Pantry originated during one of their routine strolls through Eastlake. “There was this old, abandoned house, full of raccoons, with a beautiful rose bush outside,” recalls Veltkamp. “There’s so much displacement in Seattle. Not too long ago Eastlake consisted of farms, and very soon it will be all condos and high rises. We were both interested in preserving this rosebush.”

They did, literally. They picked the bush and made rose petal jam. The day they started filling the moving boxes, the “raccoon house” was leveled. For them, the jam became a personal metaphor for loss, and the act of making jam a means of preserving something inevitably slipping through their fingers—”canning the memory of something that was,” as Gannon says.

Through the project, the artists crochet themes of loss and nostalgia with reflections on family traditions, the feminine, nurture and comfort. When they started sharing their jellies with friends, family and new neighbors, the act of gift-giving became an equally important and intrinsic part of the project. In it are echoes of early social art practices like that of Rirkrit Tiravanija, who famously prepared and served pad thai for exhibition visitors. Tiravanija is often called an apostle of what has been dubbed the “relational aesthetics” movement, which favors the human relations it produces over art as a private experience.

While Veltkamp adds sugar to a steaming pot and crushes the quinces with his grandmother’s potato masher, the couple recounts their fortunate meeting five years ago. Almost immediately after, they started collaborating and have not stopped since. They are getting married next month. “As a child, I’d never conceived of that any of this life would be accessible to us,” says Gannon. “To be so domestic and partnered in a small town hasn’t been possible, historically.”

“There’s this Martha Stewart-esque quality to our lives,” Veltkamp chimes in. “Well, I guess we are a jacked-up, fucked-up version of Martha.”

“I like to elevate something broken into something beautiful in my quilts,” says Veltkamp. “I won’t cover up, but expose it with neon thread, like the Japanese art of Kintsugi. The imperfection creates a vulnerability. The quilts are also a metaphor for the body, carrying defects and depression.”

“There’s a brokenness to our work,” says Gannon. “Maybe that comes from having heavy-set bodies. Not being of a traditional body size also means we have a different relationship with sweet things. What we’ve learned is that our bodies can create spaces where permission around food is granted. That’s what I like about jam too: It’s saying: yes, you can celebrate.”

While Pantry is about making jam and sharing it with loved ones, on one hand, it also packs a sense of urgency, a gentle mandate for social connectivity. Since last November, communion with other people—friends, neighbors and strangers alike—is a strategic necessity.

“Of course, nothing has changed since the election except me giving attention to how bad it is,” says Gannon. “But as members of a [class considered] undesirable by the political leadership, our happiness, our flourishing, any opportunity to not be defeated seems like a victory. The creation of a resilient community is a good way to respond. Jams will be just one more tool in the arsenal.”

Other tactics include increasingly merging life and art, engaging with Bremerton as a creative endeavor, and transforming their Bremerton house into their own home gallery and artist refuge (plans are still in flux but include showing work by Seattle and Bremerton makers and an opt-in residency for those who need it). All of it fuses into festiveness, togetherness, community-building and beauty particular to Veltkamp and Gannon’s holistic aesthetic—a true Gesamtkunstwerk.

“We want to live a beautiful life, aesthetically and ethically,” says Gannon. “We’ll incorporate another practice so that ideally, every detail, from rising to sleep, engages in deliberate acts of beauty. That’s a good enough goal for life, we think.”