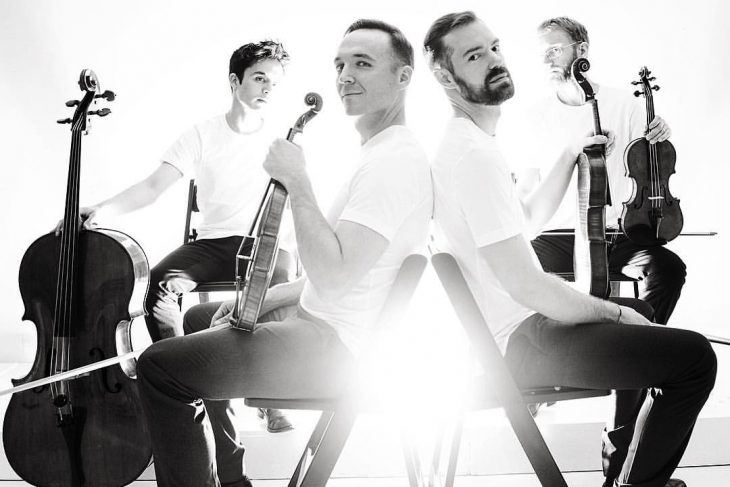 On May 10, Town Music wrapped up its season of wandering locales with a performance at First Baptist Church on Capitol Hill by the JACK Quartet with Town Music’s director, cellist Joshua Roman. The JACK is committed to commissioning and performing new music. To start, the musicians played three works composed in the last few years, two of them specifically for the group: Jefferson Friedman’s “Quintet” and Amy Williamson’s “Richter Textures.” Williamson’s piece, along with John Zorn’s “Ouroboros,” were regional premieres, as was the final piece of the evening’s program, Roman’s own “Tornado,” co-commissioned by Town Hall.

Friedman’s piece, often very busy, came fresh upon the ear. When quieter, as at the start, it felt like peacefully humming bees, with a slow viola melody above, but those tremolo chords soon became aggressive. There was the bell-like use of harmonics and slow, melodic moments that came in phrases from one or another instrument. The piece held attention throughout.

Those same aggressive, screechy tremolo chords—plus slides, slurs and discordances—came again in Zorn’s two-cello work, played by Roman and Jay Campbell, for whom it was composed. The work’s sophisticated organization and differing time signatures were amazing to hear, particularly as the two musicians were spot-on together at all times, though where they found rudders and anchors in this music was beyond a listener to discover. Another fascinating piece.

Then came Williamson’s work for quartet. Had this been at the start it might have been more appealing. It was fairly long, and she used many of the same techniques as the first two: loud scratchy tremolo chords, harmonics, forward energy. The audience had heard all these techniques twice already and better programming would’ve included something different here. None of these three works had any real melodies to hang on to, just phrases, some of which were repeated in different instruments from time to time.

After intermission came the refreshing change: an arrangement by violinist Ari Streisfeld of three madrigals by late 16th-century composer Carlo Gesualdo, whose startling modulations were way ahead of his time. Surprisingly these three madrigals were not Gesualdo’s most out-there compositions, but their polyphonic style functioned beautifully for five instruments instead of voices.

Last came Roman’s imaginative piece, in which he aurally describes a tornado. One could hear the rushing wind, the hail and rain, as Roman used every technique possible on a stringed instrument to create the sounds—hitting the strings with the back of the bow; sliding a soft palm up and down all the strings, making a shushing sound while bowing slowly; as well as this concert’s ubiquitous, aggressive tremolos and long slow harmonic sections. However, there were also melodically tuneful sections, which were absent in the earlier contemporary works.