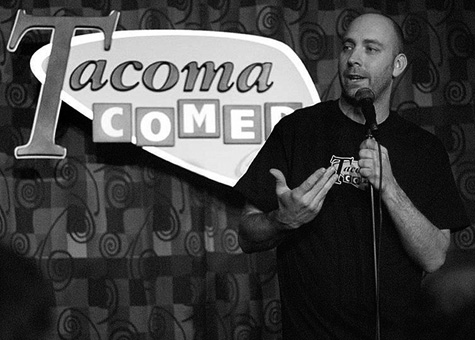 When Aaron Flett-Riggs started doing stand-up in 2004, Tacoma’s comedy scene was flourishing. Since then, the local comedy circuit has turned into a wasteland. Riggs swears he had nothing to do with it. But he could have a lot to do with the scene’s revitalization. With the recent opening of Tacoma Comedy Club on the corner of 6th and Tacoma in the Malarkey’s building, Riggs and business partner Adam Norwest have brought the laughter back to Tacoma. Riggs, who can often be found on his own stage bringing the house down with his free-associative, conversational act, was kind enough to shine some light on the birth of the club. JACKIE FENDER

Who played your first show? Collin Moulton, the weekend of October 22–23. His Saturday show, at 8 p.m., was probably one of the funniest comedy shows I have ever seen.

Will the club succeed? If we bring in the best and freshest comics, people will come to the shows. Also, being on the road and seeing comics, we know who we want to book and who is funny. We don’t bring the same people back over and over again like so many other clubs do. Tacoma Comedy Club wants to be known as a place where it doesn’t matter what night you come; you know you are getting a very funny night of comedy.

How has your experience as a traveling comic affected the business? There are a lot of things that go on behind the scenes that you look for, as a comedian. When you walk into a club and the ceiling tiles are falling down, or the bathrooms are overflowing, it gives you a bad feeling. You think, if this is the way the owner treats his building, how is he going to treat me? Happy comedians put on better shows.

What are some of your dream acts? Wow, there are so many. We’ve already booked some. We already have Rebecca Corry, Paul Ogata and Kyle Cease booked for the next three months. I would love to get Joe Rogan, personally, or maybe Ben Bailey from Cash Cab; I love that show.

Biggest fears? Hmmm, I don’t really have any. I never thought about it that much. I guess I’m scared that we’ll do such a good job that we’ll have to hire someone to do our jobs because we’ll be busy counting money. •