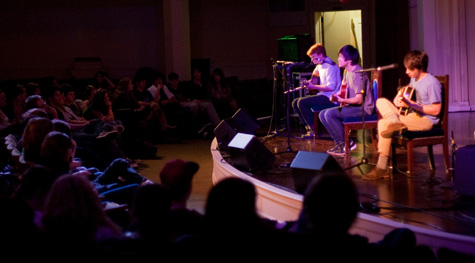 Top bands, featuring SOTA students and alumni, we hope to keep in touch with in 2011.

(from left) Chayse Cope, David Yi and Brendan Dickerson of the band Hail, perferming at the SOTA 10th Anniversary show at Urban Grace in downtown Tacoma. Photograph by Drew Shapiro.

Hail Kind of folk, kind of early ’90s Jeremy Enigk, mostly just well-crafted pop songs soaked in reverb with gorgeous harmonies and slow, melodic guitar lines. The group impressed a sold-out room and David Bazan after opening for him at the Loft in March.

Makeup Monsters After coming in fourth at EMP’s Sound-Off competition two years ago, the two-piece (sharing guitar and drum duty) added Jay Clancy on drums and is now one of the tightest power-pop rock outfits in Seattle. Imagine Brian Wilson meets the Strokes.

Oberhofer Already featured in the New York Times, the New Yorker, a SOBE commercial and the “indie accreditor” Pitchfork, Brad Oberhofer’s eponymous synth-pop electro outfit is blowing up the Brooklyn scene, and Tacoma is proud to say for once we heard him first.

Valerie Warren An epic, bluesy diva with a voice the size of a canyon. Armed with an acoustic guitar and a confident grin, Warren shared the stage in November with Lemolo, Ritchie Young and Shenandoah Davis (who joined in from the crowd with beautiful harmony on one song).

Wheelies Hands down Tacoma’s best bar band. With catchy, sing-song melodies, drinking songs and lovesick anthems, Wheelies has grown up with a punk rock party in a box and wants you to open it like a piñata.

History’s Savages You probably haven’t heard them yet, but you should. They sport Fugazi-esque rock ’n’ roll with catchy bass lines and a guttural lead singer who sounds like a cross between Tom Waits and Ian MacKaye.

Slowwave Back in town after a yearlong hiatus in Brooklyn, Slowwave (previously Freeze and Fur Coat) is putting out its first EP in January and has already received rave reviews from the Seattle Times and numerous local blogs. The group features interesting Radiohead-esque percussion tracks with layered vocals and guitars, easily compared to the likes of Bon Iver, the National and the Thom Yorke outfit.

Apache Chief The Super Friends has started a garage-rock band. Calling up the likes of Northwest legends Girl Trouble and the Melvins, and adding just a touch of psychedelia, Apache Chief rocks.

Tall Girl Formed from the remains of the Tacoma staple Don’t Tell Sophie, this three-piece Olympia band blends all kinds of beats and bravado together into a big soupy mix of rock ’n’ roll pop. It’s really a lot of fun.

Zach Varnell makes records in Tacoma at SOTA Studios and teaches audio recording, songwriting and the physics of sound.