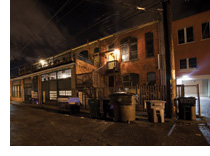 Last year around this time, the City Arts team was beginning to put together a feature-length ode to the Warehouse (right), a great music space that promised to become the locus for a new music movement in town. Our story entertained the possibility that such a space could ignite a scene akin to those that have popped up in blue-collar burgs across the nation. We headlined the article “Oakland. Brooklyn. Tacoma?” Then, only a few weeks later, the news came that the space had shut down. Turns out you need a license to throw shows in this town.

Despite that setback, we stand behind our assertions about the rising music scene in Tacoma. And if there were any doubts, this month’s cover story should quell them. The Warehouse, after all, was just a building, and the shuttering of a building alone cannot stop a burgeoning music scene from breaking out. In this issue you will find proof of that in the potent list of great bands that you have to hear in 2011, any one of which could become your favorite new obsession, or the world’s for that matter. (See “What’s That Noise?” page 10).

And don’t worry about our cover subject this time around. Geoff Weeg is a solo performer, so he can’t break up. And don’t even think about moving, Geoff.