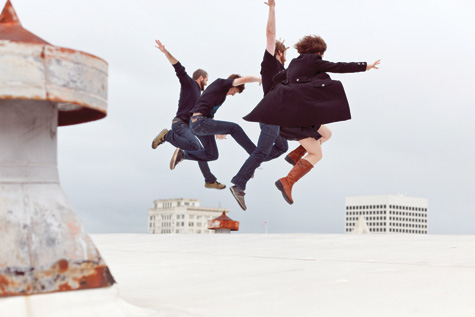 Goldfinch prepares to unveil the most anticipated local release of the year.

Aaron Stevens and Grace Sullivan, founders of the Tacoma-based folk-rock band Goldfinch, are no strangers to taking bold leaps. For their first album, Goldfinch (2009), the pair – brother- and sister-in-law – participated in a nude photo shoot together, symbolically and literally baring it all, just as they do in the music they create.

“The first album was like drawing a line in the sand, and we’ve made several lines since then,” Stevens says. “We’re still not being invited to weddings because of these lines. But we’re still drawing them. We’re choosing to make our lives more complicated to make art we’re proud of.”

I am meeting with Stevens and Sullivan at the small cocktail bar 1022. They arrived smiling and greeted the bartender, whom they know, settling in with a familiar ease. As we take advantage of happy hour, I can tell right away that their personalities reflect their songs: open, honest and accessible.

Just before he headed out to meet with me, Stevens tells me, he was painting while his kids listened to his copy of Goldfinch in the other room. He found himself constantly thinking over the changes he would make now and the things he would do differently, he says.

But how about these new tracks?

“We’re learning how to break our own rules and push ourselves a bit harder,” Sullivan adds. “It’s really like, ‘Okay, now we’re making music that we’d actually be listening to.’”

Part of the improvement is due to the fact that, since their first album, Sullivan and Stevens have acquired three new bandmates, Paul Hirschl (drums), Jake Rohr (bass) and Steve Norman (pedal steel, trumpet), who have provided the music theory background they lack.

“They tell us what we’ve been doing musically,” says Stevens. “Paul and Steve geek out over music theory all the time. They tease us for having our own language, but they have theirs too.” 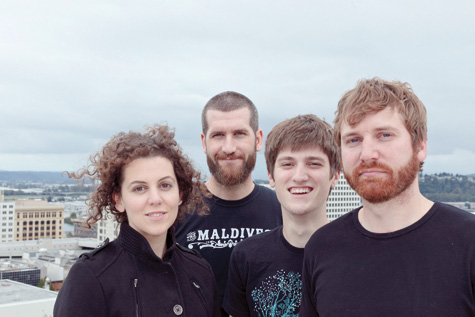 The languages of lyrics and theory meet with a quiet brilliance in two tracks the group released late last year, “Elephant” and “Vacant Lot.” With these songs, the band takes one step further into uncharted territory, lyrically and musically, leaning away from the more traditional folk sound while also adopting new personas in their lyricism. The results, according to the duo, have been deeply moving.

“I have felt more connected to the new material than I ever did with the old material,” Stevens says.

Creating these songs, as well as the ones still in the works for the upcoming album, has required countless hours both in and out of the studio, sacrificing sleep and time with family. “I don’t think balance exists,” Stevens says. “It sounds like a fucking unicorn.”

But creating these songs fulfills a need for Sullivan and Stevens. The pair constantly feels these words knocking, and no matter where they are they will respond, whether that means leaving work or writing songs over text messages.

“There’s nothing like finishing a song together,” Sullivan said. “There’s a sense of relief, like I can finally breathe.”

I can acutely feel that sense of emotional relief as I listen to “Elephant.” As the track reaches a crescendo, Sullivan sings with a passionate honesty while Stevens cries out a haunting harmony.

“At the moment I was down on my knees and couldn’t be near the microphone,” Stevens said. “I was screaming from across the room.”

The raw emotion Stevens and Sullivan pour into these tracks with their rich vocals instills both deep-rooted pain and release into their words, complemented by the precision of Hirschl, Rohr and Norman. The results clearly show the maturity one would expect from a second album.

“I could hardly record ‘Elephant’ because it took on its own meaning for me. The thing that pisses me off about being emotional when singing is that you can’t sing on key. It just sounds really bad. You look around and the band is looking at you like, ‘What the hell was that?’”

The release date for the album is still undetermined, and Sullivan and Stevens know they’re looking at more months of late nights in the studio. But as their eyes light up and their gestures become more animated, they don’t have to tell me that it will be more than worth it. •