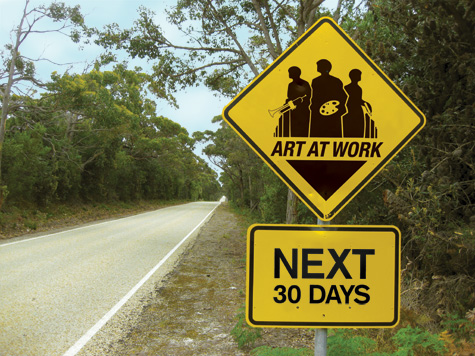 Of the three hundred cultural happenings that make up Tacoma’s 2010 Art at Work month, arguably the most significant is the two-headed affair on November 15 at Tacoma Public Library. A new addition to the Art at Work program, the event features the double coronation of the winners of the first-ever Best Tacoma Poem Contest and the first-ever First Book Poetry Contest. In a city that recently established its own poet laureate position and now boasts Exquisite Disarray, a poetry-centric publisher and the sponsor of the book contest, this event further solidifies Tacoma as a place for poetry.

It is also the launching point for Jeremy Halinen, whose debut book of verse, What Other Choice, will receive the First Book Poetry prize. “After this publication, Tacoma poetry will probably be seen as edgier than before,” Halinen says. One of his winners, “Afternoons above I-5,” is about an actual acid trip on “an overpass in South Tacoma long ago,” and much of the book, he says, “inhabits the ghastlier side of human experience, a place one might call Netherland.”

Halinen may get razzed for being a longtime Tacoma poet who defected to Seattle, but the move gives him a chance to compare the two scenes. “The Seattle poetry scene is better funded, larger and more nationally recognized,” he says, “but Tacoma has a burgeoning poetry scene, not to mention Exquisite Disarray and a fairly new poet laureateship. The Tacoma scene is perhaps more centralized and unified than the Seattle one. I’ll say this: it’s not at all disadvantageous to live in Tacoma and be a poet.”

We won’t reveal Tacoma’s Best Poem before November 15 – check the City Arts Blog to read the whole thing. Let’s just say it’s inspired by bits of shattered glass at the Washington State History Museum, and it features “a woman like a ghost fleeing down a holy road / of woe…a holy mother in Wiesbaden whose child / blown from her arms was never / seen again.” •