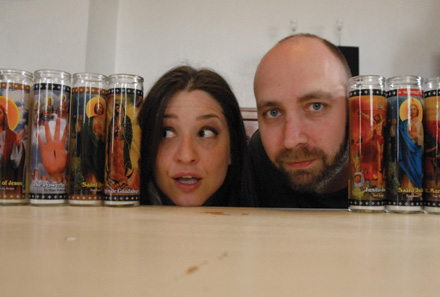 This month, stand-up comic Aaron Flett will shout “Action!” on the downtown Tacoma set of his indie film Jesus 4 Less. The movie is the result of the dwindling local comedy scene. “There used to be forty, forty-five shows a month, now it’s down to a dozen.” So he took his act on the road. “Chicago, California, Nevada, anywhere that pays.”

In the Nevada desert, Flett had the vision that impelled him to become a writer/director. “I was driving sixteen hours back from a tiny casino in Winnemucca, and I saw a Christian discount outlet bookstore. I thought, somebody made a product so bad not even God could sell it for full price.” He also thought it odd that the place had a theft detector. “Who steals from a Christian bookstore?”

Magnum and Flett of Aroma Films on the Jesus 4 Less set. Photograph by G.A. Leighton.

Inspired, Flett, influenced by his grandmother, a Sunday School teacher, and by his Catholic education, wrote a profane script about two feuding Christian bookstores, gay marriage, midget porn stars and Ted Haggard-like hypocrites. He sold a car he’d had for ten years to help raise his eleven-thousand-dollar budget and cast Tacoma actors, most notably Mike Agostini, who was on TNT’s Leverage with Luke Perry and has five IMDb credits. Flett applied to Shunpike, which granted him a downtown storefront to create a Jesus 4 Less bookstore film set (see “Empty Spaces, Open Minds,” p. 5). “I didn’t think a real Christian bookstore would let us film there,” says Flett.

Flett may be right. Donna Baker of Dightman’s Bible Book Center calls Flett’s script “a bunch of crap. With vulgar language and a ridiculous plot, it certainly would not be appreciated by a Christian audience. I am sad that he is using a Christian bookstore to promote his filthy agenda and do not find any humor at all in the story.”

Baker says real Christians do not resemble their frequent depiction in pop culture. “We are not a bunch of crusty old people.” There are eight hundred non-filthy DVDs at Dightman’s, and one employee, named Joseph, “does clean Christian comedy.” Christianity Today movie editor Mark Moring says, “I think where people get upset is when the satire turns to mockery or outright blasphemy. There are tons of Christian filmmakers.”

Jesus 4 Life producer Sarah Magnum says the film is similar in tone to Napoleon Dynamite. “It’s about the Tacoma community making do with what we have.” What the film needs now is somebody to play the stripper, Michelle. “We’re looking for a young, attractive female who can also act, and apparently that’s a tough combination to find in this town.” •