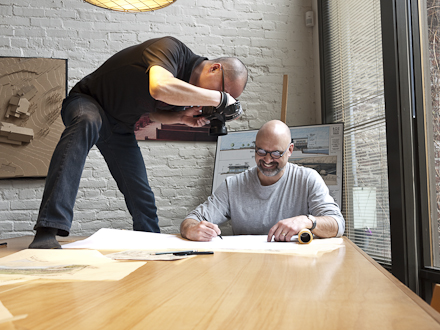 On February 10, photographer Young Lee and I celebrated my birthday with a drive to Tacoma. After an early morning stop in Bellevue, to scout the Eastside cover at Open Satellite, we charged through the rain on I-405 to I-5.

Though I’ve spent the past few years in Southworth, a ferry ride from downtown Seattle, I haven’t been to downtown Tacoma for probably ten years. After exiting to the city center, I was immediately struck by the Museum of Glass and the other buildings around me. What I’ve been hearing about Tacoma’s commitment to the arts, ever since joining City Arts, was immediately apparent. It was an ugly day (or beautiful, depending on where your alliances with Northwest weather lie), but I was happy to be entering Tacoma. 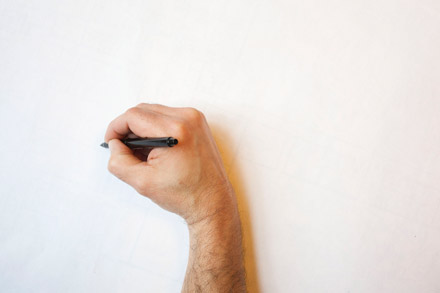 Young and I had some time before our meeting with architect David Boe at his office on Pacific Ave., so we drove along Schuster Parkway to Ruston Way. The view towards the water didn’t reveal much thanks to the clouds, but trains rolled along the tracks beside us and I could tell the port was in full action that afternoon. I have a certain love for the history of the American West, and that is always heightened by seeing a city, quite literally, steaming ahead.

Down Ruston, we passed restaurants that reminded me of awkward homecoming dance dinners and high school graduation celebrations with friends and families. After a full survey of the waterfront, Young and I picked a spot for fish & chips and chowder. Waiting for food, we pulled out paper and sketched our ideas for the cover shoot. The plan was to capture David Boe from above, drawing on a mostly blank piece of paper — and, if we were lucky, to get him to recreate some of the drawings from his Imagine Tacoma series (posted on Exit133.com). 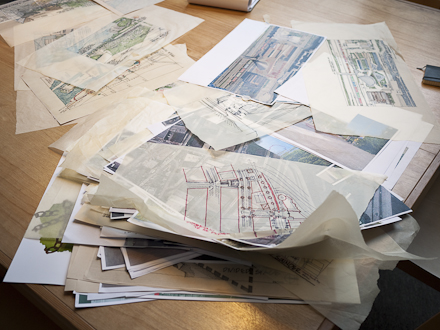 We arrived at Boe Architects after 1pm, and were welcomed into into an office flooded with light pouring in from a wall of windows. After talking for a bit, describing our ideas for the shoot, we asked about his drawing series. He grabbed an example from a pile of papers and showed how he draws on top of a photograph, which is sometimes pulled from Google Earth.  Taking more examples from a chaotic shelf, we soon had a pile on the table, full of images and translucent paper covered with marker lines, clever phrases, white-out and colored pencil. I asked Boe what his plans were for the drawings themselves. He didn’t have one. 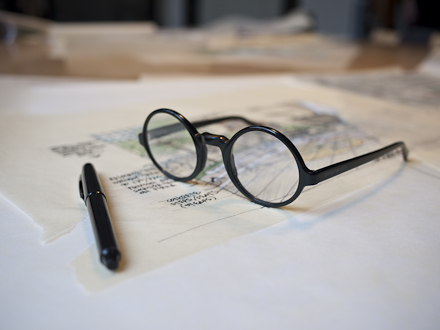 To begin the shoot, Boe sat at the corner of his table and took out a roll of paper, and un-capped a black pen. Young climbed onto chairs and the table and began shooting from above. David cooperated with all requests to hold his hand still, draw lines, sketch, and eventually trace over his completed works.

Digging through the pile of drawings, we found his “View Stimulus” drawing, which looks down Pacific Avenue, just outside his office, and imagines the road leading to a glimpse of blue water on the horizon, instead of an overlapping highway. Boe agreed that that specific composition would make for a good cover, and he set to work re-establishing perspective lines and the clock tower. 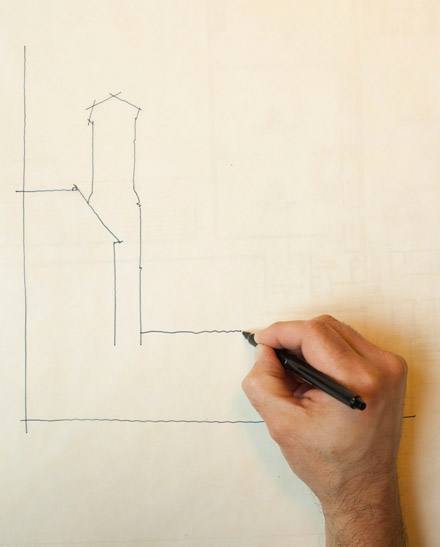 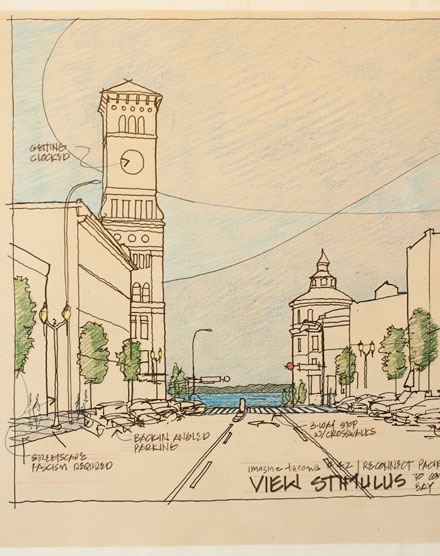 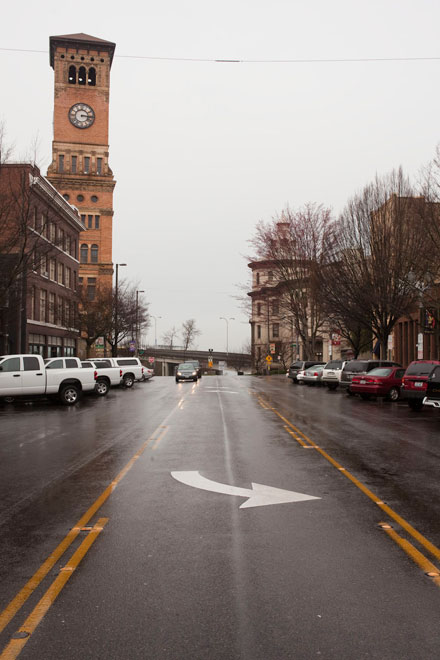 After some portraits in the office, and some jokes about Boe’s foray into theatre acting (stay tuned), we walked out onto Pacific to capture the real-time inspiration of “View Stimulus”. David and Young stood in the middle of the wet street and photographed the clock tower against a dreary sky, looming over the highway-filled horizon. But there was nothing pessimistic about the moment. As the pictures show, David’s smile is always on the verge of breaking out and blinding you like the sun after a long, grey day. 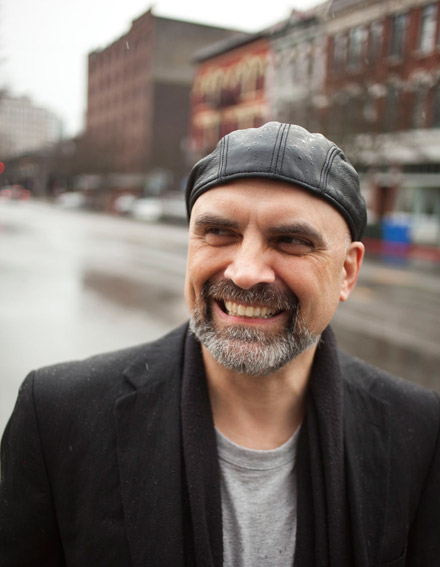 Later, while designing our feature story for the March Tacoma issue, I tried to imagine how the pages themselves might exhibit some of the haphazard characteristics of Boe’s office and pile of drawings. I felt like the design needed to dive into Boe’s head, looking down at the table through the density of his imagination and the spontaneity of his pen on the paper.

I took a break and headed to the coffee shop. In line, an idea struck me. Lacking paper — but always with a pen in pocket — I grabbed a wrapper used for donuts and I sketched overlapping boxes and images on both sides. It wasn’t until I walked back to work that I realized the paper was a glassine envelope which showed the work on both sides — almost like something I’d seen piled up on Boe’s desk. 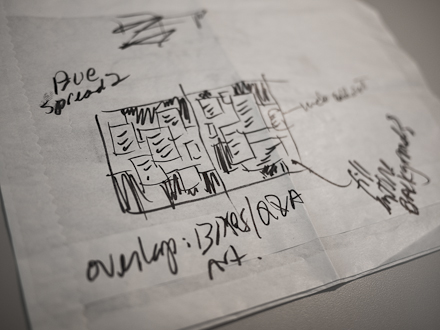 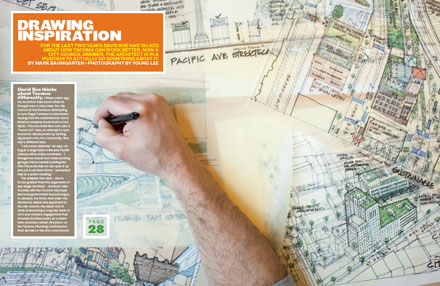 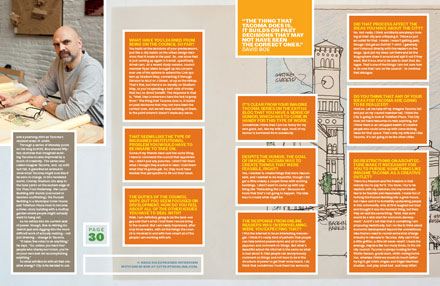 At one point during our cover shoot, Boe began sketching abstractly, while Young hovered, snapping pictures. He drew what seemed to be a squiggly goatee and two eyes. When I asked if he was drawing a self-portrait, he squinted in disbelief and asked, “IS that me?”

In those early moments of a new design, the imagination, it seems, is always a step ahead. 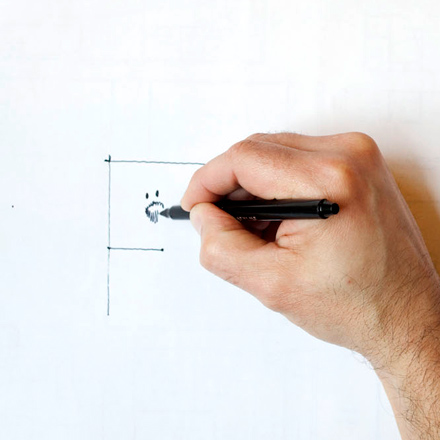