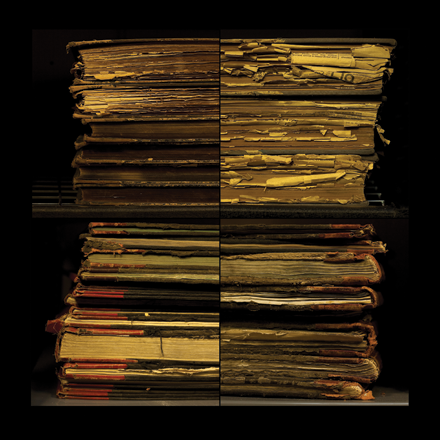 Four years after it opened its downtown Exhibit Center, the Tacoma Historical Society is moving out and heading back to the drawing board.

It’s the first Wednesday of the new year, and Tacoma’s antique row is humming with lunchtime activity. After two-plus years of construction, the orange traffic cones and public works signs are gone; pedestrians and drivers vying for parking spots are back. A group of shoppers contemplates a message on the window at 747 Broadway: “Seek History Here.” A peek through the glass reveals abundant bric-a-brac, but little history. In July 2009, the Tacoma Historical Society opened an exhibit, From Ruins to Renaissance: The Architecture of Downtown Tacoma, at this location. Today, the neighboring business is moving teacups and cookie jars into the space. What happened to the historians?

The Tacoma Historical Society’s bound collection of area newspapers dates back to 1893. It is the pride and joy of the research center.

A few days later, Dr. Dale Wirsing breaks away from a work party to offer a tour of the society’s Cedar Street address. Wirsing says that prior to the closure of the Broadway Exhibit Center, the Cedar Street space served as a storage facility. It has now been reorganized to function as a resource center for society members and researchers. The dapper seventy-three-year-old, a past society president and the current VP, is a charming guide with an enviable command of history. He is visibly proud of the society’s extensive collection of Tacoma newspapers dating back to 1883. He relates how the newspapers were once destined for landfill. Fortunately, the society stepped in to save them. In his view, the preservation of the papers and hundreds of other artifacts illustrates the importance of an organization, and ultimately a museum, dedicated exclusively to the history of Tacoma.

According to Deb Freedman, the society’s secretary, the Exhibit Center on Broadway, which opened in December 2005, was a step towards the establishment of a museum: “Tacoma Historical Society was incorporated in April 1990. For twenty years everything this organization has worked for is a museum. We wanted to be downtown. We tried it and found that it’s very expensive to mount full-fledged quarterly exhibits.” Freedman explains that the closure of the Exhibit Center brings expenses for 2010 in line with projected revenue. “We just approved our new 2010 budget. Projected expenses are $37,000. In 2009 projected expenses were $82,000. And if I get the gist of it, our membership dues, annual donations and some occasional grant writing will pay the operating expenses of the society the way we are set up now. It will also allow us to put money away for the future so that we can have an exhibit space again, or open a museum. Currently, we have an ad hoc committee looking for space.” •

The resource center is open to society members and researchers, Wednesday–Saturday, 12–5:00pm. For membership information or details of upcoming events, visit tacomahistory.org or the society’s Facebook page.