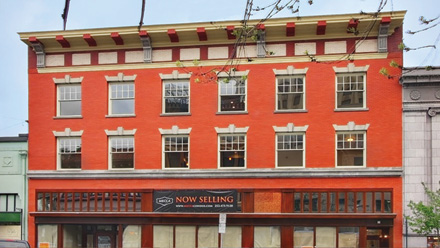 Northwest vice has landed on hard times. Not only has Seattle’s famous Lusty Lady strip joint announced that it will be closing this summer, but the Mecca Theater, Tacoma’s 102-year-old former porn palace, reopens May 20 as a legit theatre operated by Gold From Straw Theatre Company. That makes four live theatres downtown – an increasing critical mass of creative energy and profitable foot traffic. “We’re eager to support the new kid on the block,” says Broadway Center executive director David Fischer, “even if its tenure is labeled ‘temporary.’” He credits city arts administrator Amy McBride’s SpaceWorks initiative with bringing temporary arts users into empty storefronts.

“It’s the arts that can spark activity,” says historic-preservation expert Michael Sullivan. “I think the owners are a little bit desperate, and it’s great that they’re doing this. To have a building sit empty is just goofy, when artists can use it.” The Mecca does have a proud, non-porn past as a fancy hotel with nice bars and restaurants. “But no matter how good a building is, if it’s sitting vacant, it’s endangered.”

The Mecca’s new, more virtuous use gets rave reviews. “We congratulate [owner] Mr. Gintz on his excellent restoration in fine keeping with the character of Tacoma’s historic Theater District,” says Fischer. “Theatre is a scrappy business, always ready to step into the breach, to fill a void.”

Does it strike anyone as ironic that the first play in the new Mecca, the Pulitzer Prize-winning Doubt, is about furtive accusations of sexual guilt? Says Fischer: “Good theatre is always filled with irony, lust and pathos.” •